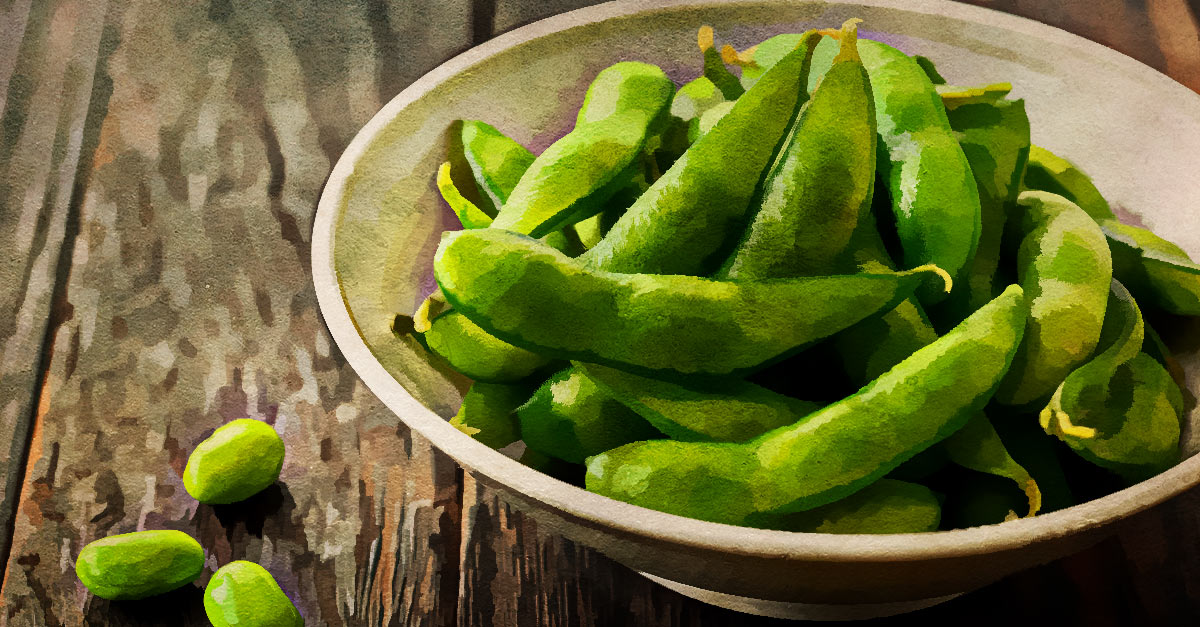 Edamame is a new-trending super food. Serve yourself one cup of these legumes in frozen, prepared form and you’ve just got yourself 8 grams of super filling fiber, over 18 grams of muscle-building protein, and a hefty helping of cancer-fighting antioxidants, all for just 188 calories.1 A staple of the Asian cuisine for so many years, you’ll find edamame very frequently at your table side in your local Japanese restaurant. But as with all other super foods, this one too, unfortunately, couldn’t escape the clutches of those pesky marketers.

With supermarkets beginning to sell packets and packets of this stuff as “healthy snacks”, people are encouraged to think that it’s okay to load up on as many of these because they’re green and all natural and healthy. This prompts them to cram several handfuls of this “oh-so-poppable” snack into their mouths, so they can give themselves a pat on their backs later for not giving into that donut instead or bag of chips instead.

Sorry folks, but the truth is that while sprinkling some edamame into your salads once in a while is probably fine, it can, in no way, be the ideal healthy snack. Why? There are reasons more than one.

Edamame is “young soybean” which means it’s soybean that is harvested before it has time to mature. In America, most of the soybean is genetically modified (GMO), which automatically means the edamame you’re buying is genetically modified as well. Unlike in many other countries, GMO products in America are usually not labeled clearly because of which they manage to fall under the radar of even the most alert consumers.

Recent animal studies show alarming outcomes of GMO diets. In one study, pigs who were fed genetically modified soy and corn showed a higher rate of severe stomach inflammation as compared to those who were fed an equivalent non-GMO diet.2 Another study reported that female rats who were fed GMO soy produced high numbers of stunted pups with more than half the litter dying within three weeks while those that survived were found to be completely sterile.3

Naturally, since these studies don’t prove that the same results would be observed in humans too, but until such evidence is produced, it’s better to stay safe than be sorry later.

2. It May Be A Potential Endocrine Disruptor

Edamame contains isoflavones, compounds that are chemically similar to estrogen, the female sex hormone. Once they enter the body, isoflavones get converted to phytoestrogens that mimic the activities of actual estrogen. This means that they can trick the body and inhibit estrogen receptors in the body, thereby disrupting natural estrogen function.

In animals, the intake of phytoestrogens was reported to negatively impact ovarian differentiation, estrous cyclicity, and fertility, leading to conditions like “clover disease in sheep.”4 5

Advertisements
of conflicting studies, more research involving human models are warranted to prove whether edamame isoflavones can impact our health negatively. Until then, it’s best to limit the consumption of edamame.

3. It May Increase Your Risk Of Breast Cancer

Alarming studies show that genistein, a certain type of isoflavone that is found in soy and hence, edamame, can activate estrogen receptors in your body. Estrogen has a strong association with an increased risk of breast cancer while genistein promotes the proliferation of epithelial cells in human breast tissue.6 For this reason, many researchers are of the opinion that consumption of edamame may increase a woman’s risk of breast cancer.7

Advertisements
due to the presence of other conflicting studies regarding the same, researchers are yet to reach a concrete conclusion.

4. It May Interfere With Digestion

High amounts of edamame or soy, contain inhibitors that block protease, a specific enzyme that our stomach needs to digest protein.8 Because of this, our pancreas has to work overtime to produce more protease.

This is not a big deal if we consume soy or edamame moderately because then, the pancreas gets enough time to recover. However, studies have found that a regular diet of soy protein in rats not only led to the increase in the number of pancreatic cells (hyperplasia) but also a rapid increase in the size of those cells (hypertrophy). 9

Advertisements
again, due to the absence of human models in studies, it is hard to predict whether similar results would be observed in human beings. But in the event that this evidence holds true for the human body, both these conditions could result in the body’s loss of ability to produce enough enzymes, which spells nothing but digestive distress for adults and growth problems for children.

With the existence of so many conflicting theories about soy and edamame, it is best to do your own research, whether you’re a man or a woman, or whether you’re worried about the consequences of adding it to your child’s diet. Therefore, we advise you to look up as much information as you can and consult with your doctor or nutritionist to see whether you need to limit your intake of edamame, or if you’re better off by skipping it completely.