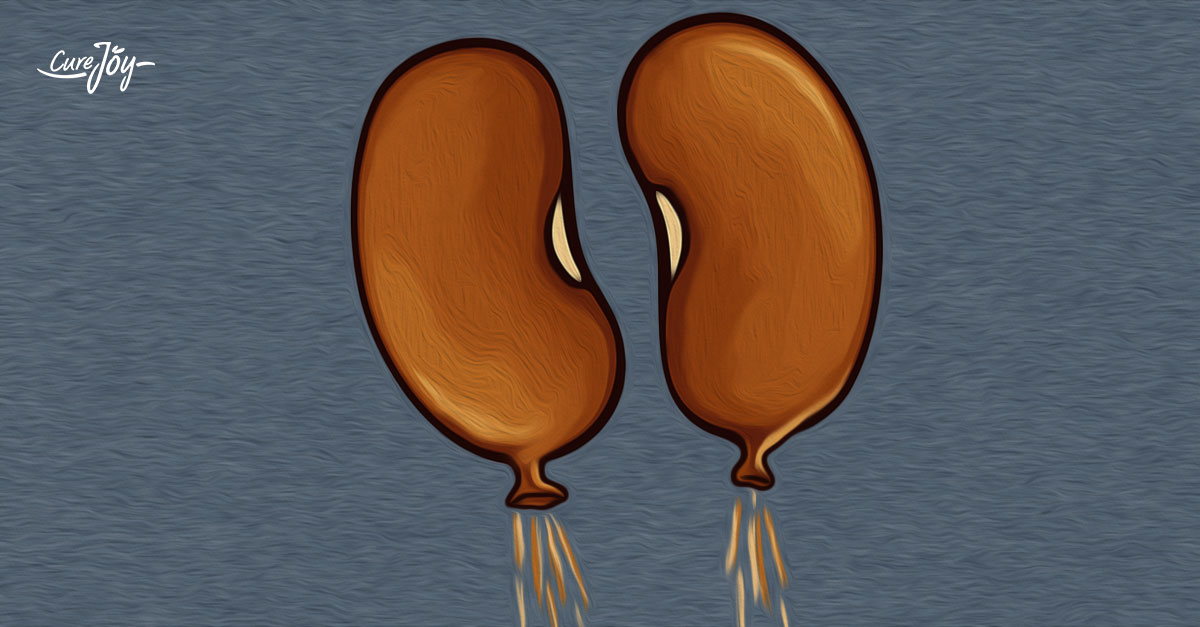 Who doesn’t love beans, cooked to perfection in an aromatic gravy or adding texture and flavor to a salad? We’ll tell you who – someone who’s cramping with gas after indulging in a bean-rich dish. Many people simply don’t eat beans to avoid the digestive discomfort – not to mention embarrassment – of the flatulence that typically accompanies them. So what is it with beans and why do they produce gas? Should you banish them altogether from your diet or are there ways to get around their troublesome trait? Let’s find out.

Beans (and other members of the legume family like peas and lentils) contain complex sugars or oligosaccharides such as raffinose and stachyose. The enzymes in our body are incapable of digesting these sugars. So instead of being broken down by our stomach or small intestine and absorbed by the body, these oligosaccharides travel undigested to the large intestine. When these starches reach the large intestine, healthy gut bacteria that live there begin to work on them in a process called bacterial fermentation. Carbon dioxide, hydrogen, and methane gases are released as byproducts during this process. These, in turn, are responsible for symptoms ranging from gas, bloating, nausea, and cramps to diarrhea and – ugh! – social embarrassment.1 2

Some Kinds Of Beans Produce More Gas Than Others

All beans, you see, aren’t created equal. When it comes to gas, some beans seem to produce more of it than others. Bean varieties that are highest in oligosaccharides include soybeans, navy beans, and lima beans. These tend to have the most “disagreeable” effect on your stomach. Garbanzo, kidney, white, black beans and chickpeas come next with average amounts. Beans that have comparatively less oligosaccharides include mung beans, black-eyed peas, split peas, and adzuki. So if you’re prone to gas, opt for the ones that are lowest in these sugars.3

Advertisements
beans contain less of the offending sugars and are convenient once in a while if you have a hectic routine. Do bear in mind though that compared to canned beans, cooked dried beans are more energy dense and loaded with a higher degree of nutrients like protein, iron, potassium, magnesium, and fiber. The sodium content in canned beans is also a cause for concern – too much of it and you’re looking at problems like high blood pressure and heart disease. And finally, dried beans are much easier on your wallet – all good reasons to stick to dried beans for regular consumption and using canned ones as an occasional alternative.4 5

beans at least a couple of times a week to get your body used to it. Don’t just have a large quantity in one sitting, though. You need to up the fiber intake gradually to allow your body to recalibrate. So focus on small portions, start with one serving a week, and work your way up to at least three or more servings a week. You will eventually see less of these problems.9 Incidentally, the study above also showed that the mere
Advertisements
anticipation of developing gas from beans seemed to influence some people’s perception of it. We may, often, be exaggerating the connection between beans and flatulence in our head, almost expecting a reaction. So don’t wish the gas into your tummy by anticipating or imagining it!10

Why You Must Still Incorporate Beans Into Your Meals

While a gassy explosion when you eat beans can seem like a deal breaker, there are several reasons to persist and make beans an integral part of your diet. As the study we just cited concluded, the benefits of eating nutrient-rich beans far outweighs its gas-producing downside.

Bottom line: If you’re looking to switch to a healthier diet that emphasizes vegetarian products over meat and dairy, don’t give up on beans. Rather than eliminating these nutritional powerhouses from your diet, explore methods to reduce the gas they produce. Also, like we said earlier, add bean dishes gradually to your diet and allow your body time to get used to them.12 13 14

Eliminate Gas From Beans By Cooking It Right

How you treat your beans before eating them matters! One study found that by boiling unsoaked beans or by soaking beans, discarding the soaking water, and then cooking the beans, you can reduce the oligosaccharide content of the beans by as much as 76%. Sprouted beans also have fewer of these gas-producing carbs so you could soak your beans and then have the germinated beans. Cooking in water with a more alkaline pH (say by adding a pinch of baking soda) also can reduce oligosaccharide content.15

The simplest trick to cooking a gas-free bean dish is pre-soaking. Here are some ways to do this:

Cold Soak: Rinse beans well and cover with water to soak overnight (or 8 hours). Beans that soak for longer periods produce smaller amounts of gas. Before cooking, drain out the water, rinse well with cool, fresh water. While the long soak reduces gas, this method requires planning ahead.

Hot Soak: In a large pot, place 2 cups of beans and add 8 cups water. Bring water to the boil and allow to boil for 2–3 minutes. Turn off the heat, cover the pot and open after a while (you can even let it sit for 3–4 hours). Drain the soaking water and rinse beans with cool water. Now cook with fresh water. The “hot soak” method also reduces gas-producing compounds, aside from cutting cooking time.

Thorough Rinse: Rinsing the beans thoroughly and discarding the water is important whether you decide to soak first or boil it straight. Much of the gas-producing compounds get released into the soaking/cooking water. Replace this with fresh water several times while rinsing to further reduce gas from dried beans. Even when you use canned beans, remember to drain the water in the can and then rinse the beans well in a colander. Draining the water serves a dual purpose – it cuts down the gas-producing elements and reduces sodium by 41%.16 17 18

Use Carminative Herbs And Spices To Reduce Gas

A carminative herb or spice, when used in cooking, helps prevent gas formation in the digestive system or expels gas from it. Carminatives contain camphor, eugenol, menthol, thymol, and carvone, compounds that help to boost the digestive activity and minimize gas. Common spices and herbs with these compounds are allspice, caraway, cloves, fennel, dill, sage, and thyme. Herbs from the mint family (peppermint, spearmint, marjoram, lemon balm) and carrot family (parsley and celery among others) are also well known for their carminative properties.19 20

Asafetida, cumin seeds, black pepper, and fresh ginger are spices typically used with beans in Indian cuisine. A traditional Chinese method suggests adding wormwood to the soaking water to expel gas. The Mexicans cook beans with epazote or wormseed to get rid of flatus while an old Appalachian practice is to cook beans with a small, whole carrot.

Ayurveda categorizes carminatives into “heating” and “cooling” types. Both categories normalize the action of vata dosha, the humor which, according to ayurveda, governs movement of all kinds in our bodies, including blood circulation and elimination of waste. You can use both kinds with beans to minimize gas.

Get the health benefits of beans by following these simple tips and, soon, you may forget that they ever troubled you. We leave you with the wisdom of Julia Child: “Try new recipes, learn from your mistakes, be fearless, and above all have fun!”