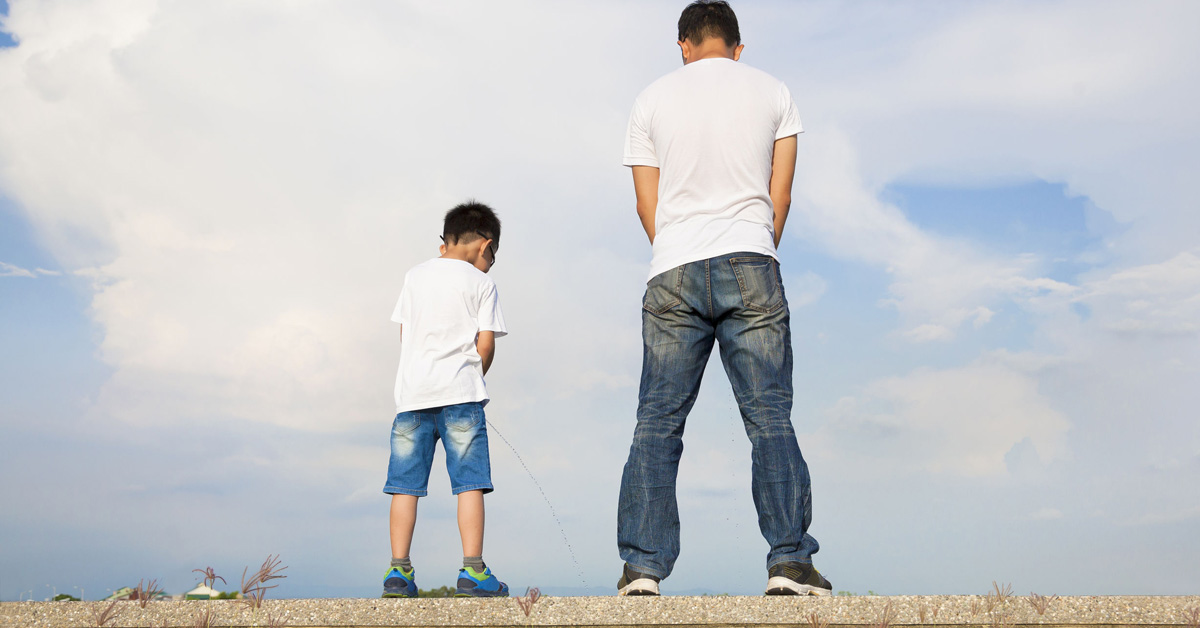 Today, there are enough people vouching for both sides of the argument. So, let’s delve right in and find out why sitting down is a healthier and a more hygienic position for men to pee in.

It Prevents The Spread Of Infectious Diseases

If the nasty splatter that you leave behind doesn’t convince you to change your position, think of all the infections you’re spreading! Although urine is sterile when it enters your body, it’s not so sterile when it accumulates on the toilet seat. Pee droplets can spread germs that cause the common cold, flu, rubella, and meningococcal disease, among others.1 If you’re sick, you might spread your infection to the person who uses the restroom after you. And if you’re using a public stall, you might be at the receiving end of these infections.

If you’re affected by lower urinary tract symptoms (or LUTS), you might want to sit down for this. The signs of LUTS include an urgent and frequent feeling of needing to pee, weak or poorly directed stream of urine, and retention of urine in the bladder even after urinating.2 Studies suggest that sitting down to pee may improve prostate health. It relaxes the bladder, empties your bladder of urine, improves urine flow, and reduces LUTS.3 4

For healthy men, however, the position does not matter.

It May Improve Your Sex Life

Some experts claim that by improving your prostate health, sitting down to pee also enhances your performance in bed. While this hypothesis hasn’t been clinically proven, it does have some merit. Both prostate problems and LUTS are linked with sexual dysfunction in men5 6 and since peeing sitting down can deal with these to some extent, it spells good news for men’s sex life too.

On a lighter note, it can enhance sex life in other ways – a clean toilet seat is an aphrodisiac to women, haven’t you heard?

If you’re thinking “who pees sitting down,” or “why should I?”

Sitting down to pee can be more comfortable, especially when you also have to take a dump. We all know how the john awakens the reader in you who suddenly wants to know how to use the shampoo bottle. So, sit down, begin reading the label behind that bottle, and finish the performance at your own pace. While you’re at it, you could also take your phone in and finish typing out that important work email. And who doesn’t want to kill two birds with the same stone?

It Reduces The Janitor’s Work

Unless you’re highly skilled in the art of aiming, it’s definitely more hygienic to sit down and pee. Even on your best days, can you really assert without doubt that you’re piddling right into the bowl? Most men seem to agree upon the fact that there’s no way a man can piss directly into the bowl every single time. And if you’re not wiping the toilet seat clean post the deed, it’s better to just sit down.

Advertisements
unless it’s a urinal that we’re talking about, sitting down to pee is probably better for you (and us). Nobody wants to be greeted with pee as soon as they enter the restroom. If you feel that you “just can’t do it sitting”, we understand but only as long as you use toilet paper, and while you are at it, put down the toilet seat!