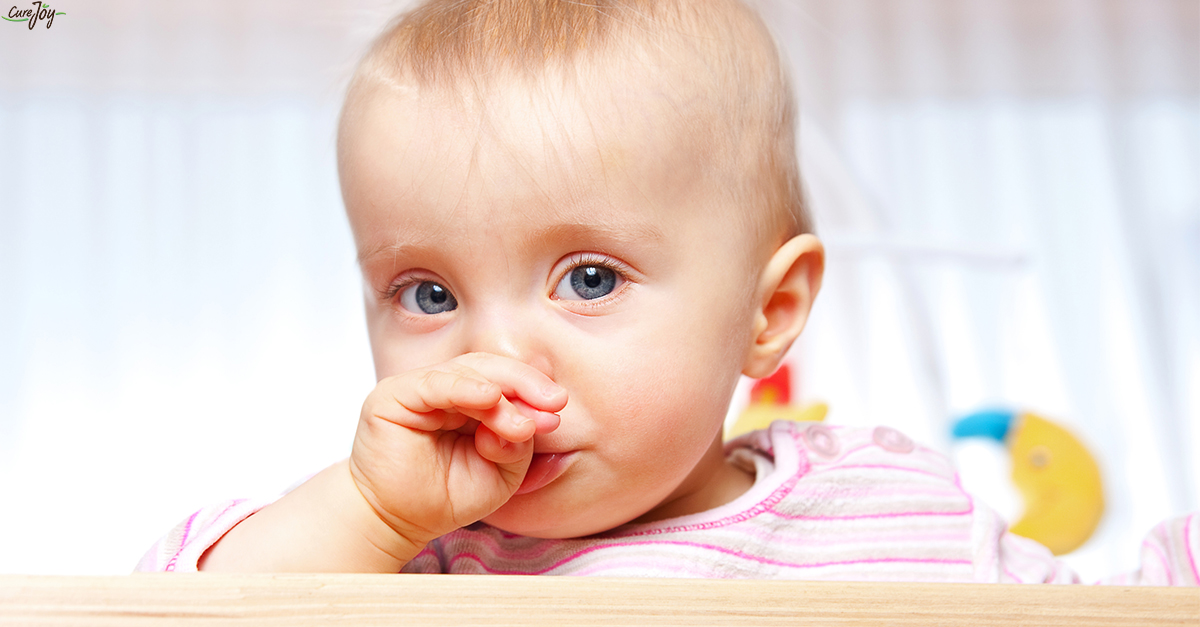 Allergies in babies are often mistaken as a symptom of an illness. A series of sneezes or an upset stomach could make you think your baby is sick. Before self-diagnosing the condition and rushing to the doctor’s clinic, let us understand what an allergy really is.

Allergies are a result of an exaggerated response of the immune system to a seemingly harmless external substance called an allergen. Some common types of allergens are pollen, dust, mold in damp places of the house, pet dander and foods like peanut, nuts, eggs, milk, and shellfish. A child could come in contact with allergens by breathing, eating, touching or after it is injected into the body.

The immune system reacts to these substances as it would to a bacteria, virus or parasite and launches an attack in the form of body chemicals called antibodies. This response of the immune system leads to the development of symptoms like sneezing, coughing, itching, running nose, which could easily be confused with a common cold. Overproduction of antibodies could also lead to rashes, swelling, or an upset stomach.

At times, a severe reaction from the immune system causes life-threatening symptoms like breathing difficulty, vomiting, swelling of the face including lips, throat, and skin, palpitations, loss of consciousness, sweating, skin redness or blue color skin. This is called an anaphylactic or anaphylaxis shock. In such a case, you must dial the emergency number or call your doctor immediately.

How
Advertisements
To Differentiate Between Allergies And Cold

Since the symptoms of various diseases and allergic reactions are quite similar, it can be difficult figuring out the difference between the two. Look out for these signs.

If your baby has having a heavy and cloudy nasal discharge, along with fever, it is an indication of an infection, a common cold. The symptoms usually go away in a week. You could visit the pediatrician to ease the symptoms.

However, if the mucous discharge is thin and watery, it is a sign of allergy. A cold could go away in about 10 days, but allergies could strike often and persists for a longer time.

Coughing and wheezing happen due to swelling in the respiratory tract due to a viral infection. Sensitive airways can easily swell up causing the babies to have a noisy breathing. Coughing and wheezing could also be a symptom of asthma, however, the condition is only diagnosed in babies when they are over a year old.

Advertisements
it is an allergy, your baby might have a dry cough, which could persist and cause wheezing or noisy breathing. Wheezing indicates your baby is having trouble in breathing. Other signs of difficulty in breathing include flaring nostrils, breathing through the mouth, sucking in chest or stomach while breathing, getting fussier and showing signs of discomfort.

An upset stomach can be due to a bacterial or viral infection. Your child could be vomiting, having diarrhea, or gassiness. However, these symptoms don’t necessarily develop out of food allergies. Swallowed phlegm with an allergin constituent could even cause irritation in the stomach.

Babies often develop rashes in early weeks after birth, however, they disappear by the time they are 2-3 months old. However, this is also the time they are more prone to allergic conditions like eczema, which can develop as red, itchy patches on the limbs, face, and abdomen.

Advertisements
type of skin allergies is contact dermatitis. It can develop as a reddening skin or inflammation due to coming in contact with a certain substance like cloth, soap, or wool.

An eye allergic can look very similar to a viral infection like conjunctivitis. Reddening of the eyes, watery eyes, itching sensation and eyelids getting glued shut on waking up in the morning are some common symptoms of both the allergy and the infection.

Another difference between allergies and sickness is that some of them for instance, common cold are likely to happen in cold whereas the allergies which can cause sneezing and coughing can happen throughout the year.

If you find your baby is allergic to something, first, you might want to reduce their exposure to that substance. To identify and prevent the allergies try to keep your pet out of the baby’s room for a week and see the difference. Cover the mattress with dust and allergen-proof covers. Replace feather pillows with foam ones. Avoid smoking inside the house and clean the house regularly. Wash the baby’s clothes with hypoallergenic detergent.

Advertisements
careful to check when your baby’s allergic symptoms develop—the allergy can occur again if your little one is exposed to the same allergen. Having an allergy can also make them more prone to an illness. For instance, sneezing, wheezing or coughing could increase the risk of asthma, ear infection and sinus infection.

Consult a doctor in case there is no change in symptoms—chances are either you are unable to identify what is causing the allergy or your baby has developed an infection and their body is genuinely responding to it.