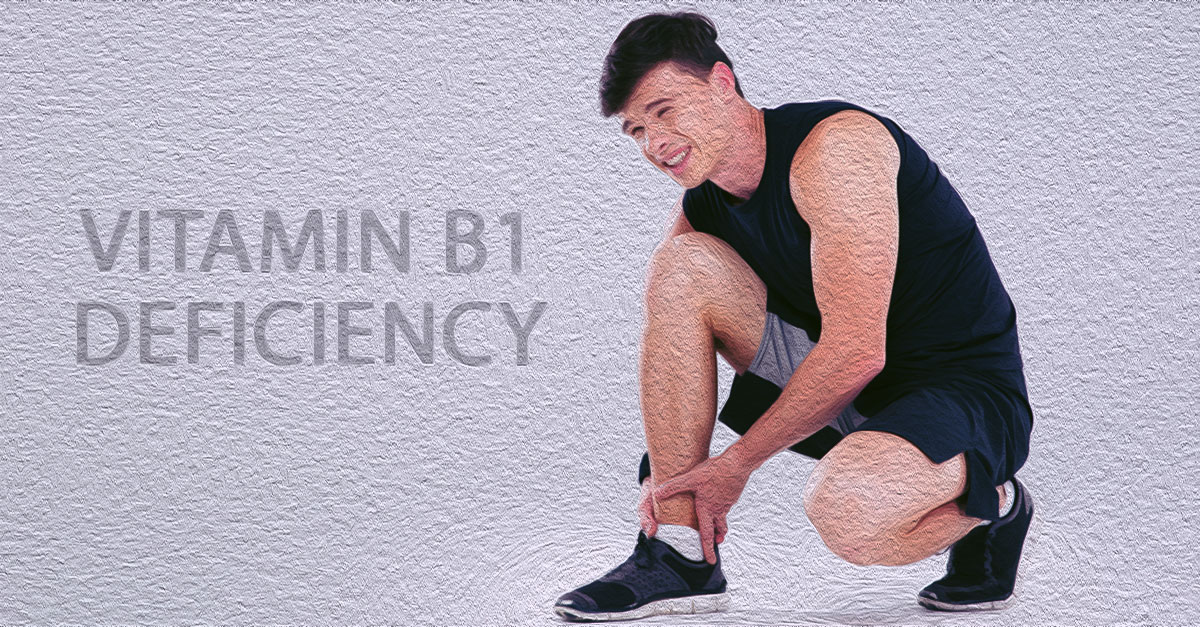 Vitamin B1 allows the carbohydrates and protein that you consume to be used for energy creation or metabolism. It is needed for the functioning, growth, and development of cells in your body. The body doesn’t make its own vitamin B1 and stores very small quantities of it as well, so you need to consume thiamine through your diet on a regular basis to ensure a steady supply.[ref]Thiamin. Office of Dietary Supplements.[/ref]

Vitamin B1 or thiamine is something your body needs to keep your energy metabolism going. Without it, the growth and development of your body’s cells will take a hit. It isn’t a vitamin your body can produce naturally, so getting adequate amounts is critical. Fail to do that and you’ll soon start to see the signs of your body protesting or weakening.

If left unchecked, beriberi could result in psychosis, congestive heart failure, coma, or even death.[ref]Beriberi. U.S. National Library of Medicine.[/ref]

Your nervous system is fueled by glucose. And not getting enough thiamine can mean its supply is inadequate. The result? A condition called beriberi that occurs due to thiamine deficiency. There are two kinds of beriberi. Dry beriberi affects the nervous system and has the following neurological symptoms:[ref]Guilland, Jean-Claude. “Vitamin B1 (thiamine).” La Revue du praticien 63, no. 8 (2013): 1074-5.[/ref] [ref]Beriberi.

If you’re a heavy drinker or an alcoholic, you might also experience some nerve pain from the heavy drinking. This pain is compounded by having a thiamine deficiency.[ref]Thiamine. U.S. National Library of Medicine.[/ref]

You’ll find the nutrient in foods like fortified or enriched breakfast cereals and grains, in pork, seafood like muscles or trout, sunflower seeds, soy products, and yeast extract. The recommended dietary allowances (RDA) for thiamine is 1.1-1.2 mg a day for adults and 1.4 mg for pregnant women and nursing mothers.[ref]Thiamin.

A vitamin B1/thiamine deficiency can also result in a condition called wet beriberi. The potentially dangerous symptoms of this condition are easily missed by many. This is because some of its symptoms could be confused with other problems like routine fatigue. Wet beriberi affects your cardiovascular system. You may see one or more of these signs of the thiamine deficiency resulting in wet beriberi:[ref]Essa, Essa, Michael R. Velez, Sakima Smith, Shivraman Giri, Subha V. Raman, and Richard J. Gumina. “Cardiovascular magnetic resonance in wet beriberi.” Journal of Cardiovascular Magnetic Resonance 13, no. 1 (2011): 41.[/ref] [ref]Beriberi. U.S. National Library of Medicine.[/ref]

Ignoring these symptoms may sometimes cause rapid deterioration in some people due to the collapse of the circulatory system. Fluid buildup in the lungs or pulmonary edema is also a possibility. Look out for extreme shortness of breath, coughing with blood, palpitations, and chest pain. Circulatory system failure and pulmonary edema can be potentially fatal quite quickly and must be treated with the utmost urgency. Call an ambulance and head straight to the emergency room. Remember, while it is potentially fatal, it is also reversible and can be safely managed if noticed in time.

In a milder version of infantile beriberi, an infant typically aged 4–6 months, may lose their voice temporarily.[ref]Thiamine deficiency and its prevention and control in major emergencies. World Health Organization.[/ref]

This is an easily cured problem but is very risky if left untreated. The symptoms progress rapidly and the fatality rate is quite high, so do act on it immediately. Babies aged 1–3 months are especially vulnerable.

Advertisements
infants might have symptoms resembling bacterial meningitis, including:

This acute neurological problem is a severe form of dry beriberi and results in a range of symptoms affecting both your central and peripheral nervous system. This condition, too, could be life-threatening. These are symptoms/signs typical of this condition:[ref]Vasan, Sarayu, and Scott C. Dulebohn. “Wernicke Encephalopathy.” (2017).[ref]What is ataxia?. National Ataxia Foundation.[/ref]

Causes Of Vitamin B1 Deficiency And At-Risk Groups

Advertisements
could wind up with a vitamin B1 deficiency because you’ve been eating poorly or have a deficient diet. But it might also be because your body isn’t properly absorbing the nutrients from the food due to an underlying health problem like an intestinal or stomach disorder.[ref]Guilland, Jean-Claude. “Vitamin B1 (thiamine).” La Revue du praticien 63, no. 8 (2013): 1074-5.[/ref] [ref]Thiamine. U.S. National Library of Medicine.[/ref][ref]Thiamin. Office of Dietary Supplements.[/ref] Here’s a look at those most at risk of developing such a deficiency:

Treating A Vitamin B1 Deficiency

Treating a thiamine deficiency may involve a regimen of supplementation and any other treatment needed for you depending on the severity of your symptoms. Typically, the World Health Organization suggests 10 mg thiamin (oral doses) every day for a week, then 3–5 mg a day for 6 weeks to overcome a mild vitamin B1 deficiency.[ref]Thiamin. Office of Dietary Supplements.[/ref]

If your problem is more severe, you may need to be given 50–100 mg of the vitamin intravenously. After this, your regimen will involve a week of 10 mg a day given intramuscularly, followed by 6 weeks of 3–5 mg a day of oral thiamine.[ref]Thiamin. Office of Dietary Supplements.[/ref] Infants will be given smaller doses than these.