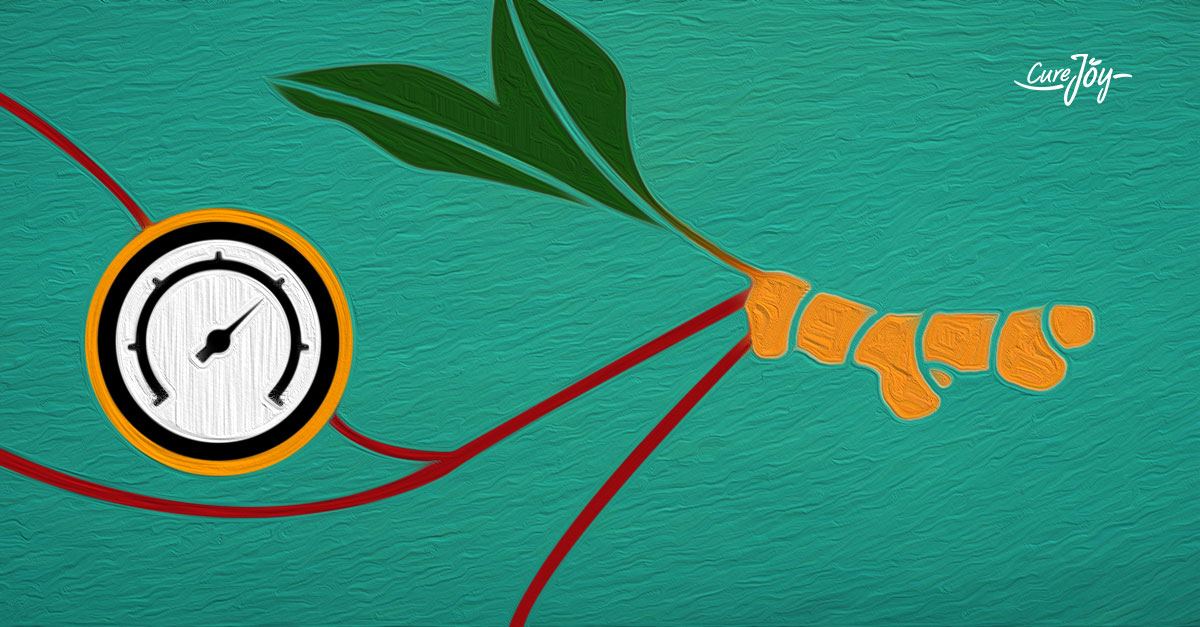 As you grow older, it’s normal for your blood pressure to go up. For most cases, no recognizable cause can be found for this increase, but overweight or obesity, high salt intake, alcoholism, smoking, physical inactivity, long-term lack of sleep, kidney disorder, race, family history, and genes can all raise your risk.

Statistics say that for every 3 Americans, 1 suffers from high blood pressure or hypertension. It also contributes to around 1000 deaths a day.1

Since hypertensive patients often suffer from related health problems including high cholesterol and blood glucose, which together make up metabolic syndrome, they are at an increased risk of heart failure, heart attack, stroke, and kidney failure. High blood pressure is largely symptomless and it’s critically important to keep it under control.2

While exercise and medication may be required to control hypertension, adding  turmeric to the diet could help! This golden spice is valued by the ancient science of ayurveda for its many medicinal properties and is used for treating a variety of conditions from rheumatic pains to poor vision and skin diseases.3 As it turns out, turmeric may be beneficial for those with high blood pressure too. It lowers blood pressure via multiple mechanisms, ameliorates complications, and tackles other related health issues. Here’s a look at the many ways in which turmeric can help.

Antioxidant And Anti-Inflammatory Curcumin In Turmeric May Lower High BP

Turmeric may be able to bring your blood pressure down primarily due to the action of curcumin, an antioxidant compound present in turmeric that has anti-inflammatory benefits.4

A common cause of hypertension is age-related endothelial dysfunction. Endothelial cells line the inside of the blood vessels and release chemicals that balance the contraction and relaxation of the blood vessels, thereby modulating blood pressure. With age, the endothelial cells start malfunctioning due to oxidative stress, which causes inflammation, plaque deposition, and finally atherosclerosis. The plaque does not just inhibit blood flow, it also makes the artery stiff and unable to relax. This, in turn, plays a part in the progression of high blood pressure.5

Advertisements
studies show that curcumin can protect against high blood pressure and vascular dysfunction even when these are chemically induced or brought on by a toxin.9 10 However, not enough clinical trials have been conducted to understand the extent of turmeric’s effect on patients of hypertension. Evidence is mixed. In one study on patients of diabetes, taking curcumin for 10 weeks did not seem to influence the blood pressure, while in another it lowered blood pressure in patients of kidney disease, which is elaborated in the next section. In another study on postmenopausal women, curcumin improved blood flow and dilation of the blood vessels after exercise, showing an improvement in endothelial function. The systolic blood pressure too dropped.11 12 13

Poor kidney function is a contributing factor to high blood pressure since the kidneys are responsible for filtering out toxins from the body and maintaining the fluid balance. High blood pressure, on the other hand, can also damage the kidneys. The effect of turmeric has even been tested on human patients of lupus nephritis, a condition characterized by kidney inflammation, passage of protein and blood through urine, and high blood pressure. In this study, taking a dietary amount of 1.5 g turmeric daily could bring down systolic blood pressure as well as the amount of protein and blood excreted through the urine.14 Curcumin can also protect the kidney from free radical damage and can improve its functioning. It’s recommended as adjuvant therapy in patients of chronic kidney disease.15 However, this study did not show significant benefit for diastolic blood pressure.