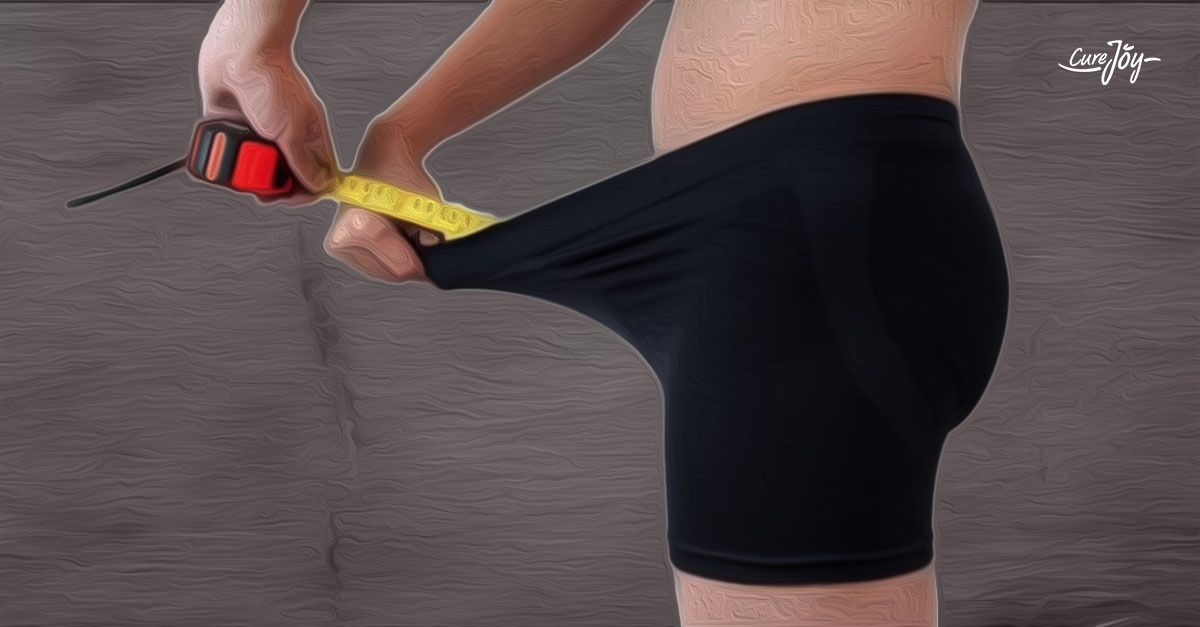 Most urology practicers will vouch that not a day goes by without hearing these five words from a patient: “Doc, my penis is shrinking.” The truth of the matter is that the penis can shrivel due to a variety of circumstances, but most of the time, it is a mere illusion – a sleight of the penis if you will.

Weight gain and obesity cause an increasingly generous pubic fat pad, the male equivalent of the female mons pubis, which makes the penis appear shorter and retrusive. It is estimated that with every 35 lbs of weight gain, there is a 1-inch loss in apparent penile length. However, the length is usually intact, with the penis merely hiding behind the fat pad – the “turtle effect.” Lose the fat and presto…the penis reappears. Having a plus-sized figure is clearly not helpful when it comes to penile size and other issues.

As with so many physical traits, penis size is largely determined by genetic and hereditary factors. Blame it on your father (and mother). Urologists can attest to the fact that penises come in all shapes and sizes and that flaccid length does not necessarily predict the erect length and it can vary depending on many factors. There are showers and then there are growers. Showers have a large flaccid length without significant expansion upon achieving an erection as opposed to growers, who have a relatively compact flaccid penis that expands significantly with an erection.

Advertisements
biological parameters – including penis size – have a bell curve with a wide range of variance, with most clustered in the middle and outliers at either end. Some men are phallically endowed and some phallically challenged, with most somewhere in the middle. In a study of 3500 penises published by Alfred Kinsey, the averages were seen to be like this:1 2

The Problem Of Penile Shrinkage

If there’s a 9-letter word every man despises, it’s “S-H-R-I-N-K-A-G-E.” Penile size in an individual is quite variable, based on penile blood circulation. The more the blood flow, the more the tumescence (swelling). The less the blood flow, the less the tumescence. “Shrinkage” is a real phenomenon provoked by exposure to cold (weather or water), the state of being anxious or nervous, and participation in sports. The mechanism in all cases involves penile blood flow.

Acute Shrinkage Of The Penis

Exposure to cold causes vasoconstriction (narrowing of arterial flow) in the body’s peripheral parts (including the penis) to help maintain blood flow and temperature in the vital core. This principle is used when placing ice on an injury as the vasoconstriction reduces swelling and inflammation. Similarly, exposure to heat causes vasodilation (expansion of arterial flow), the reason why penile fullness can occur in a warm shower.

Due To The State Of Mind

Nervousness and anxiety cause the release of the fight-or-flight hormone adrenaline, which functions as a vasoconstrictor. This has numerous effects, one of which is a flaccid penis. In fact, when the rare patient presents to the emergency room with an erection that will not quit, urologists often inject an adrenaline-like medication into the penis to bring the erection down.

Due
Advertisements
To Workouts

Hitting it hard in the gym or with any athletic pursuit causes a tremendous increase in blood flow to the parts of the body involved in the effort. There is a “steal” of blood flow away from organs and tissues not involved in the exercises due to “shunting” of the blood flow to those with the highest oxygen and nutritional demands, namely the muscles. The penis is one of those organs from which blood is “stolen,” causing deflating. Additionally, the adrenaline release that typically accompanies exercise further shrinks the penis.

Cycling and other saddle sports – including motorcycle, moped, and horseback riding – put intense, prolonged pressure on the perineum (the area between scrotum and anus), the anatomical location of the penile blood and nerve supply, as well as the pelvic floor muscles that help support erections and maintain erectile rigidity. With the compression of the penile blood flow and the nerve supply, the direct pressure on the pelvic floor muscles, and the steal, there is a perfect storm for a limp, shriveled, and exhausted penis. Too much time in the saddle can also cause erectile dysfunction.

Chronic
Advertisements
Shrinkage Of The Penis

Due To Irregular Sexual Activity

Like any other body part, the penis needs to be used on a regular basis – the way nature intended – in order to maintain its health. The absence of regular sexual activity can cause disuse atrophy (wasting away with a decline in anatomy and function) of the penile erectile tissues, resulting in a “de-conditioned,” smaller, and often temperamental penis.

The higher the frequency of intercourse, the lower the risk of erectile dysfunction.

If one goes for too long without an erection, smooth muscle, elastin, and other tissues within the penis may be affected, resulting in a loss of penile length and girth and an inability to achieve an erection. On the other hand, scientific studies have found that sexual intercourse on a regular basis protects against erectile dysfunction.

Due To Diseases And Treatments

Radical prostatectomy, a treatment for prostate cancer, can also cause penile shrinkage. This occurs because of the loss in urethral length necessitated by the surgical removal of the prostate and because of the disuse atrophy and scarring that can occur from the erectile dysfunction associated with the surgical procedure. For this reason, getting back in the saddle as soon as possible after surgery will help “rehabilitate” the penis by preventing disuse atrophy.

Additionally, Peyronie’s disease can cause penile shrinkage by scarring the erectile tissues that prevents them from expanding properly.

How To Avoid Shrinkage

While diseases like cancer might not be completely under your control, here are a few steps you can take to reduce the risk of shrinkage as much as possible:

Living With “The Bigger The Better” Mentality

Penis size has not escaped “the bigger the better” mentality, where large cars, homes, body types, and logos on shirts are desirable and sought-after assets. The pervasive porn industry has given the average guy a bit of an inferiority complex. But, here’s the fact: The average male has an average-sized penis. However, although the average is the norm in our society, it curiously has a bad rap, so much so that we go an extra mile to alter our appearance. For example, the Mambas of New Hebrides wrap their penises in many yards of cloth to make them appear massive in length. The Caramoja tribe of Northern Uganda tie weights at the end of their penises in an effort to elongate them.

Adages concerning penile size and function are common, e.g., “It’s not the size of the ship, but the motion of the ocean.” Or, “Size should never outrank service.” The messages conveyed by these statements have significant merit, but nonetheless, for many men and women, size plays at least some role and many men are conscious of how well-endowed they are. But, know this: While men with tiny penises may be less capable of sexually pleasing a woman, men with huge penises might intimidate women and provoke pain and discomfort.