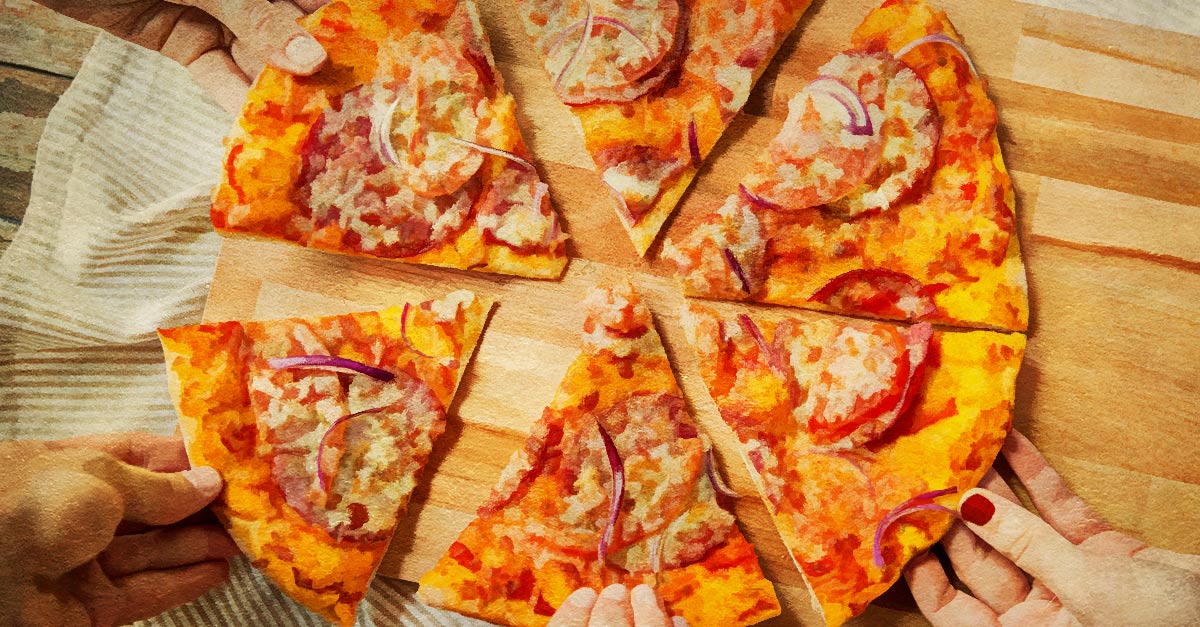 If there’s one food that can bring people together, it’s pizza. From habitual gluttons to health-conscious fitness junkies, fussy kids to discerning grandparents, strict vegetarians to equally strict meat eaters, pizza unites us all. But while for most of us pizza makes for a welcoming treat to celebrate the onset of a weekend, for some, pizza is a way of life, quite literally.

We’re referring specifically to the people who could easily eat pizza for breakfast, lunch, and dinner, every day, for the rest of their lives. If you’ve ever wondered why there is an increasing number of t-shirts, cushion covers, phone cases and accessories designed around pizza, these are the folks to blame, guys. The pizzaholics.

But is there really such a thing as a pizza addiction? Research says yes, it is indeed as legit as an alcohol or a drug addiction.

Pizza Is The Most Addictive Processed Food, Research Says

With the evidence of “food addiction” growing increasingly by the year, researchers at the University of Michigan were curious to see what foods or food attributes were associated with addictive eating.

Advertisements
research team thus set out to poll students at the university, asking them which foods they thought they were most likely to get addicted to. Based on this information, they then created an “addictive profile” which ranked 35 different foods according to how likely they are to be problematic in terms of being addictive.1

Results Of The Study

Besides pizza, chocolate, chips, cookies, ice cream, and french fries were considered addictive. These foods are highly processed and high in fat and refined carbohydrates.

Surprising nobody, pizza showed up as one of the most addictive foods in the profile.2

Advertisements
top-ranking addictive foods included chocolate, chips, cookies, ice cream, and french fries – basically, everything we love. The least-addictive foods? Carrots, beans, apples and brown rice, with cucumbers ranking last. Once again, not something to be surprised about at all.3

Eating A Pizza Can Be As Addictive As Drugs Or Alcohol

Foods with a high glycemic load trigger the brain’s reward system and release dopamine. The same effect is seen during substance abuse.

What many consumers don’t know is that highly processed foods (like the ones that ranked high in the study) are specifically altered in ways so that they can be extremely rewarding. How?

According to the researchers, food addiction is characterized by symptoms such as loss of control over consumption, continued use despite negative consequences, and an inability to cut down despite the desire to do so. Addictive-like eating has been associated with increased impulsivity and emotional reactivity, which are similarly implicated in substance-use disorders. Thus, “food addiction” may share common behavioral attributes with other addictive disorders.

Advertisements
mentioned earlier, these foods (with the exception of non-diet soda) contain high levels of fats and refined carbs. They also have a high glycemic load (which rapidly raises a person’s blood glucose level after it is eaten) and get digested very quickly.4 This process ultimately signals changes to the neurological dopamine reward system, which is incidentally, the same thing that happens to your body during drug or alcohol abuse.

If you think about it, the body develops an addiction to alcohol because it contains a concentrated addictive substance called ethanol. This is why hard liquors that contain higher concentrations of ethanol are more likely to make someone an alcoholic. Similarly, because the concentration of sugar in processed foods is so high, one tends to get more addicted to them.

Advertisements
researchers also point out that foods and substances in their natural state are rarely addictive. This explains why grapes only become addictive once they are processed into wine, and why poppies take on addictive properties once they are refined into opium.
This is why processing is such a large positive predictor for determining whether a food is associated with highly problematic, addictive eating behaviors.

Besides making you crave sugary, unhealthy food, consuming pizza (and other processed food) can lead to obesity and lethargy.

Just as in the case of any strong addiction, pizza wreaks havoc on not just your body, but also on your brain.

A chewy white flour-dough base slathered with a sauce that’s loaded with sugar and smothered in casein-laced fatty cheese; this is about as “processed” a food can get. By making your blood sugar spike suddenly, the sugars (resulting from the breakdown of the refined carbs from the flour, the sauce, and the fats) make it rebound just as rapidly, to a point where it goes way below where your blood sugar levels were, originally. As a result, you feel hungry all over again and start developing more cravings, where your body nags you to replace all that sugar you’ve lost.

The casein in the cheese (and all other milk products, for that matter) releases compounds called casomorphins upon digestion. These stimulate opioid receptors that are part of the opioid system which controls and regulates pain, reward, and addictive behaviors.5 6 7

Advertisements
of this results in a superstimulus that creates a feeling of high that seems better than anything you can feel. But on the flip side, the rebound creates a low that is actually much worse, making you feel more down than you can possibly feel. With constant consumption, your body loses the ability to handle this cycle, as is the case with substance abuse.

Eat Pizzas In Moderation And Along With A Salad

Asking someone to stop eating pizza would be sacrilege. After all, we humans need our army of comfort foods to rush to our aids once in a while. However, putting the body and the brain through such drastic swings on a regular basis will eventually lead to a complete system shut down. Therefore, consider keeping in mind the age-old adage – “too much of anything is bad” and limit yourself to moderate consumption.

In addition to this, try eating a healthy, veggie-filled salad along with your pizza. Salads have a low glycemic index and can help you feel full, preventing you from chomping down a bag of chips later that evening.