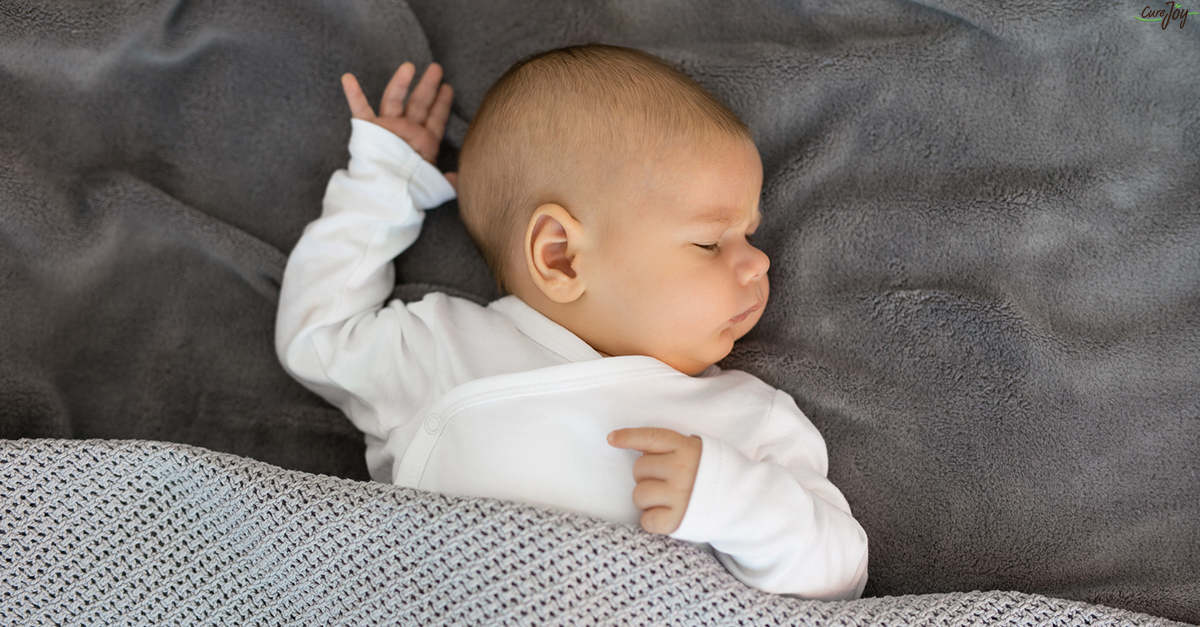 While there are good and bad sleeping positions for mothers during pregnancy, even infants younger than a year old must be made to sleep in a particular way.

It is not good for your baby to sleep on their side for a long time—since your baby’s sleep is prolonged, lying on one side results in some negative effects.

There are various health conditions associated with babies that arise when babies are made to sleep on one side. These conditions make sleeping on the side unsafe for the baby.

The risk of Sudden infant death syndrome (SIDS) for infants sleeping on one side is double as compared to those babies who sleep on their back. This is because while sleeping on the side, the infant can easily roll on their stomach. The risks are higher between ages 1-4 months, but it reduces once your baby learns to roll over on their own by the age of 6 months.

Also called unilateral erythema of the face, harlequin color change is harmless. Before you seek google search—the condition involves reddening of the skin on the sleeping side of the baby. One side of your baby turns red or pink while the skin color remains same on the other side.

Advertisements
your baby will distinctively appear half red or pinkish. However, there is nothing to worry about as the red fades away in a few minutes if the baby is turned to sleep on their back. It has been explained as the accumulation of red blood cells on one side due to gravity while the infant sleeps in one position for hours.

3. Torticollis Or Tilting Of Neck

The abnormal tilting of the baby’s head is caused due to shortening of muscles in the neck on the lateral side of the head. One of the possible reasons for this is a bad sleeping position for babies.

The sternocleidomastoid muscle in the anterior of the neck can shorten by repeatedly sleeping on one side or due to movement of the head from side to side when sleeping on the back. Since an infant’s neck muscles are weak and still developing, it could affect them more.

It needs physical therapy to relieve the muscle stiffness—a recovery harness with a soft pad at the neck can gradually reduce the tilt and bring the neck back to the normal position.

4.
Advertisements
Flat Spots On The Head

Your baby’s head has soft spots or fontanelles where the bones are not yet formed and are connected by tissues. When they sleep in the same position, especially on the sides, the movable skull bones cause an area of their head to become flat. Though this doesn’t affect the brain development, it could cause a change in the appearance of the head, leading to flat spots.

Flat spots usually disappear and the skull shape becomes normal as baby starts to sleep on their back.

Ways To Prevent Your Baby From Side-Sleeping

1. One way is to reposition your baby while they are sleeping. Place them on their back if you find them sleeping on their side.

2. Avoid placing any support like a pillow to prevent them from rolling on their side—pillows could increase the risk of SIDS.

3. Sleep positioners or wedges are not a safer option. They are known to increase the risk of suffocation in infants while sleeping.1

4. Keeping shifting the position of your baby’s head while they are sleeping. If they have a tendency to sleep with their head tilted towards the left, shift it to the right—this can prevent the occurrence of flatheads.

By 6 months of age, your baby will have a better control over their muscles and will be able to roll over on their tummy. However, if they have a tendency to sleep on their side, slowly turn them over.

If they roll back in their sleep, don’t force change their position, repeatedly—instead watch them closely and keep them in your sight.