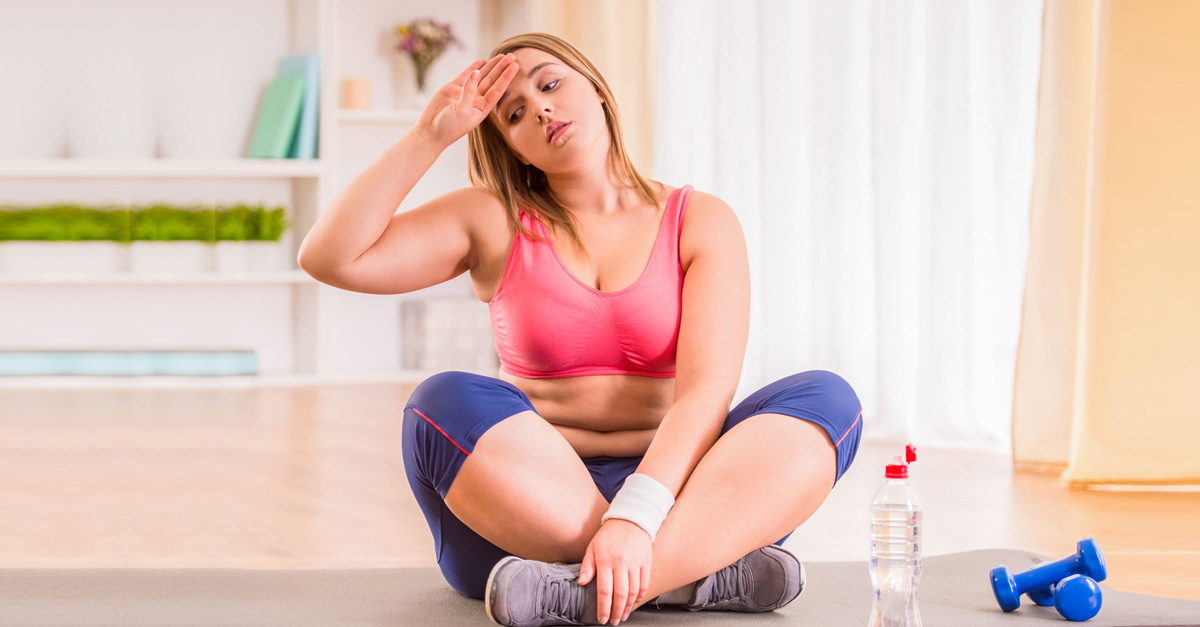 Every time I get a new weight loss client I’m 100% committed to helping them battle their bulge. However, I often find that calorie-controlled diets don’t work for them. This has led me back to all my biochemistry textbooks, stashed in the loft, with the question in mind: what leads the human body to decide whether to either burn fat or store fat?

Obviously if you are consistently eating too much and exercising too little there will be some weight gain. However, my extensive reading has shown me that other factors also play a major part too.

The link between stress and obesity is being increasingly confirmed in scientific research and it’s one of the prime reasons people can’t lose weight.

When you are under stress you are constantly churning out the stress hormone adrenalin which prepares our body to fight or flee from an attack; think back to yesteryears when you would have been running to save your life to escape that woolly mammoth!

Your body goes into preservation mode and your blood supply is diverted away from processes such as digestion to the muscles. This causes the body to use glucose, and not body fat as its fuel. And because you aren’t using the fat, you are storing it for later.

Advertisements
stress is prolonged, the body starts to make another stress hormone called cortisol which breaks muscles down and having less muscle subsequently slows down metabolism. Numerous other studies have found that people with high cortisol levels tend to put on weight around their middles.

Tip: When you find yourself with a couple of minutes to spare, stop and breathe properly. Diaphragmatic breathing is best to lower stress levels, where you breathe in slowly ensuring your belly – not your chest – expands on the in breath. Try doing 20 of these once a day. Or join up to a restorative yoga class to learn to breathe properly.

For women, in the week leading up to their period, weight gain can be no illusion. This can be down to retaining fluid caused by rising oestrogen levels. Plus, levels of progesterone drop at this time, which makes matters worse, because this hormone is an anti-anxiety agent and diuretic that allows us to get rid of excess fluid.

Advertisements
state of low progesterone can lead to sugar cravings in an effort to calm down, and it can also impact on motivation to exercise.

Tip: If you tend to get fluid retention symptoms such as bloating around the tummy, swollen breasts or weight gain, try cutting out caffeine based products such as tea and coffee, and replacing them with herbal tea for four weeks to see if your symptoms subside. It’s believed that substances called methylxanthines in caffeine-based products (even after they have been decaffeinated) can contribute to symptoms.

Insulin is the hormone made in our pancreas that helps the body move sugars from food into the cells of our bodies. It transports glucose first to the liver and then to the muscles where it’s stored as glycogen to use as energy. If there’s any left-over (which there usually is) it’ll take it to the body fat cells and store it there.

Eating refined carbohydrate foods and sugars can lead to excess insulin as they cause sharp spikes in blood sugar and signal the body to make more to process it. But that’s not the whole picture.

Advertisements
spikes blood sugar too. So, if you haven’t eaten for a while and you are sitting at your desk and receive 16 emails about an unexpected crisis at work or home, your adrenalin production increases because your body now thinks that there’s danger and that spikes your blood sugar.

Sitting down, you’re not going to use the extra glucose available to you because you haven’t got a physical threat to fight or flee from. So once again, more insulin has to be made to get the excess glucose out of the blood, leading to more fat storage.

If you have spent months committing to exercise and eating well with no results, have your blood glucose levels and your blood insulin levels tested with your GP or Nutritionist.

Tip: Get carbohydrates from whole foods, especially vegetables and fruits, and make sure your meals contain proteins such as lean meat, fish, eggs or pulses. Add  some fat from foods like avocado, nuts, seeds, olive oils and olives, as this combination can slow the release of glucose into the blood, requiring less insulin. It’s why having a little butter on your bread can help slow down the rate at which glucose from the bread is released into your blood.

Our brains are wired for survival in primitive times which can disrupt how our bodies burn fat. The autonomic nervous system is the part of your brain that ‘runs’ your body behind the scenes and it’s not under our conscious control.

It regulates heart rate, respiration rate, temperature control, and immune and hormonal systems while we get on with our lives.

It has two parts:

Both these systems should work in balance, but for most of us they don’t. Most people exist in a state of SNS dominance which means we’re constantly in the fight or flight response, which causes adrenalin overload leading the body to only use glucose as fuel and not body fat’.

The PNS on the other hand helps restore calm, balance functions such as digestion and skin that suffer during stressful periods, and is stimulated by rest and relaxation.

Advertisements
Try a weekly restorative practice of some kind. One of the best ways to activate your PNS is by lengthening your exhalation using Tai Chi, Yoga or Pilates. Failing that, upon waking and before bed, try taking 10-20 breaths in for a count of four and out for a count of 6-8. Trust me… it’s instantly calming.

I love asking my clients why they choose to polish off an entire packet of biscuits or eat 3 slices of cake when they have the knowledge to know that their actions aren’t going to benefit them in anyway. It is not their lack of education that pushes them to do these things, but rather a subconscious state of mind.

Its not uncommon for someone to have had a particularly bad day at work or an argument with somebody they care about, and if food is their thing (as it is for many people), they will then end up with the contents of their kitchen cupboards in their stomach, whether they were hungry or not.

Advertisements
If tempted to eat to numb negative emotions, try mindfulness practices to help you be aware of your feelings and acknowledge that the feelings themselves can’t hurt you and will eventually go away. Binging can only be thwarting your weight loss efforts.