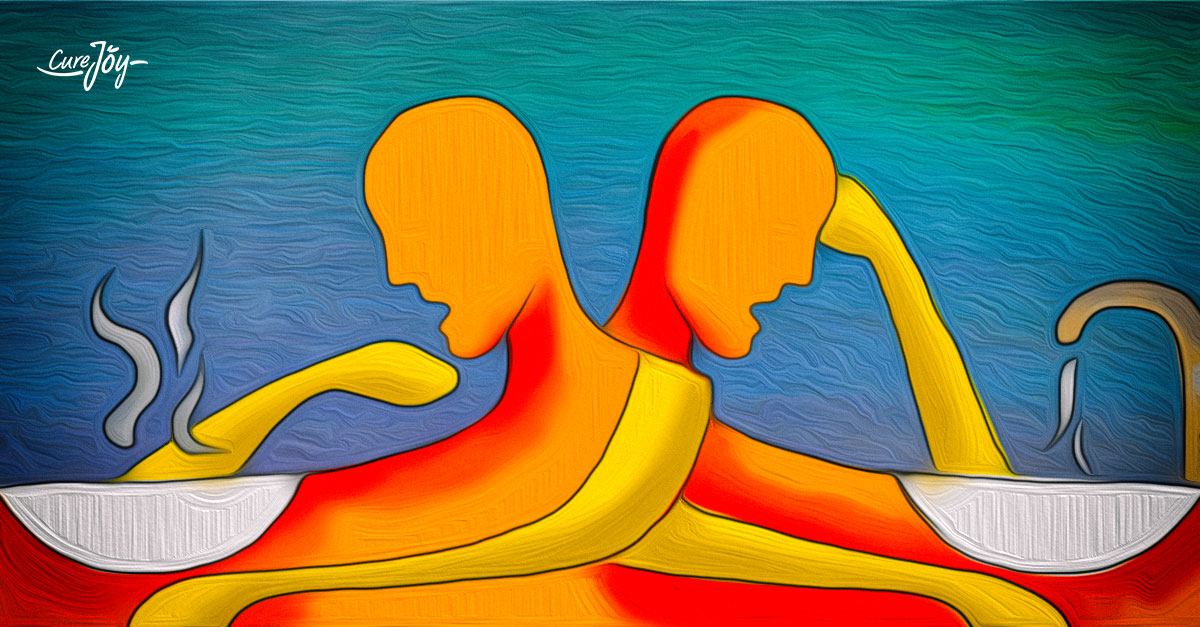 Do you dread mealtimes because they’re inevitably followed by that queasy, pukish feeling or even actual vomiting? While nausea is often caused by triggers like motion sickness or morning sickness, many other conditions that affect the digestive system can also lead to nausea after you eat.

If you feel sick after a meal, check to see if you have any of these conditions:

Food poisoning: Nausea, vomiting, diarrhea, stomach cramps, weakness, fever, muscle aches, and chills after you’ve had a somewhat iffy meal can be due to food poisoning. This usually happens when you have contaminated food, infected by bacteria like Escherichia coli or Salmonella or a virus like norovirus. The symptoms of food poisoning generally make themselves felt within the space of a day or two after consuming contaminated food, though they might start anytime from a few hours to weeks later.1

Stomach ulcer: The most frequent symptom of an ulcer in your stomach is a gnawing or burning pain that starts in your abdomen. This pain can travel right up to your neck or even go to your back. Other symptoms include nausea, weight loss, indigestion, and heartburn. The Helicobacter

Advertisements
pylori bacteria may contribute to ulcers by irritating the stomach lining and leaving it more susceptible to damage by stomach acid.2 3

Gastritis: Characterized by an inflamed stomach lining. In addition to nausea and vomiting, it can cause a gnawing or burning pain in the abdomen, indigestion, and a feeling of abnormal fullness.4

Indigestion: We’ve all experienced indigestion at some point or the other. This common condition can cause gas, heartburn, and an uncomfortable, bloated feeling in addition to nausea. You typically feel the effects of indigestion soon after a meal though there can be a slight delay between your meal and indigestion in some cases. Infection by Helicobacter pylori, the same bacteria implicated in stomach ulcers, has been observed in some people who get bouts of indigestion.5

Gastroesophageal reflux disease (GERD): Another common condition which is caused by stomach acid leaking up into your food pipe. This typically happens when the muscle at the bottom of your food pipe, which is responsible for closing off the food pipe from the stomach when you’re not eating, weakens. In addition to nausea, it can cause acid reflux, heartburn, bloating, trouble swallowing, and a bad taste in the mouth.6

Depending on the condition and the severity of the problem, conventional medicine uses a range of treatments from medication to surgery to treat these conditions. It’s a good idea to get medical attention if you find that your condition isn’t improving or that your symptoms are quite intense or unbearable. Meanwhile, many natural remedies can also help you tackle nausea:

1. Have Manuka Honey For Stomach Ulcers, Gastritis, And Indigestion

Here’s a traditional remedy for stomach ulcers, indigestion, and gastritis that’s probably sitting on your kitchen shelf! Honey is widely known for its wound healing properties since it stimulates tissue growth and also has antibacterial properties.7 And since an ulcer is essentially a wound, honey works on stomach ulcers too. Research has also found that it can reduce the incidence of gastritis. It has also been customarily used over the ages to treat indigestion.

Advertisements
mechanism through which regular honey tackles indigestion is not entirely clear. But Manuka honey has been found counter Helicobacter pylori and this therapeutic effect may help it fight indigestion. Manuka honey, produced from bees that feed on the Manuka bush, has stronger antibacterial properties than normal honey.8 Having 30 ml or a couple of tablespoons of honey before meals may help you deal with tummy problems if you’re prone to them often.9

anti-inflammatory properties and its ability to stimulate gastric mucus that protects the stomach lining could be responsible for this effect. Now on the face of it, it would seem that something which improves bile production would harm people with stomach ulcers. So how does turmeric do both? The answer may lie in an animal study which found that turmeric increases the secretion of mucus much more than it increases the volume of bile.12

So add the flavorsome turmeric to your cooking or try a cup of turmeric tea to ease your tummy. Go traditionally Thai and add a dash of beneficial honey to your turmeric tea to sweeten the deal.

3. Use Bananas As A Natural Antacid

Bananas can stimulate the production of mucus in your stomach. This mucus acts as a barrier, protecting the lining of your stomach from stomach acid which can irritate it.13 Bananas also contain the flavonoid leucocyanidin which works as a natural antacid.14 One study observed that 75% of people with indigestion experienced relief either partially or completely when they took banana powder for 8 weeks.15 So have bananas to deal with issues caused by indigestion.

4. Stick To Small, Bland, Light Meals If You Have Food Poisoning

Foods poisoning tends to improve in a few days with simple measures like rest and proper diet. Try having light, bland, non-fatty meals. Rice, bananas, crackers, and toast may work well for you. It’s also important to avoid fizzy drinks, alcohol, caffeine, and fatty and spicy foods since they can worsen your symptoms.

If food poisoning is severe, you may need medication to tackle the infection and fluids may need to be given intravenously to treat dehydration. Do seek medical attention if you don’t improve in a few days.16

A long spell of vomiting can lead to loss of fluids and dehydration. It’s important to replace fluids and minerals to tackle dehydration. Oral rehydration products which do this are available and your doctor can suggest one that’s suitable for you.

You can also try a homemade solution. Dissolve ½ a level teaspoon of salt and 6 six level teaspoons of sugar into a liter of clean drinking water to make it. Try taking small sips if having a larger drink makes you nauseous.17 18

6. Have Ginger For Nausea Due To Indigestion And Gastrointestinal Infections

Ginger has been used as a digestive for centuries. It improves the movement of food in your intestines and, therefore, helps with digestion. It also has anti-inflammatory benefits. And that’s not all. Research indicates that ginger can help relieve nausea due to pregnancy, minor gastrointestinal infections, vertigo, chemotherapy, and nausea experienced after surgery. Have a cup of soothing ginger tea after meals or grate some fresh ginger into food to get its benefits.19 20

Licorice is another herb that improves the mucous coating of your stomach and food pipe. It increases the production of mucin, a component of mucus which helps protect your stomach lining from irritation by stomach acids. Flavonoids present in licorice can also inhibit the Helicobacter pylori bacteria. However, make sure you take deglycyrrhizinated licorice (DGL) to avoid harmful side effects like an increase in blood pressure caused by glycyrrhizin in normal licorice.21

You can take licorice as a capsule or make a tea by boiling about 14 gm of the root in half a liter of water for around 15 minutes. Have licorice around 15 minutes before your meals and 1–2 hours before you go to bed. 22 Do keep in mind that licorice should not be taken for more than a week without your doctor’s go-ahead. It’s also not suitable for children or pregnant women.23

8. Have Chamomile Tea For Gastritis And Indigestion

A cup of chamomile tea is a well-known remedy for tummy troubles. A flavonoid called apigenin present in chamomile can soothe inflamed or injured mucous membranes in your stomach. This helps immensely if you have gastritis. Active components of chamomile have also been found to act against Helicobacter pylori. Chamomile is a carminative as well and thus eases symptoms of indigestion.

Steep dried chamomile flowers in boiling water for a few minutes to make a healing cup of tea. Stain and drink up after meals to deal with indigestion or gastritis.24 25 If you have a ragweed allergy, don’t use chamomile, though.

9. Have Peppermint Tea For Indigestion

Peppermint relaxes stomach muscles and improves bile flow, thus helping digest food. So drinking a cup of peppermint tea after meals can help ease indigestion and its symptoms. Simply steep about a teaspoon of peppermint leaves in boiling water for around 10 minutes and drink the tea.26

10. Chew Gum To Deal With GERD

Yes, chewing is a simple remedy that can help if you have GERD. The act of chewing can stimulate the production of saliva. Saliva, in turn, can neutralize and mitigate the effects of stomach acid.28 Chew gum for half an hour after a meal to ease acid reflux and to ward off nausea. Make sure it’s sugar-free gum, though – you don’t want to encourage cavities!29