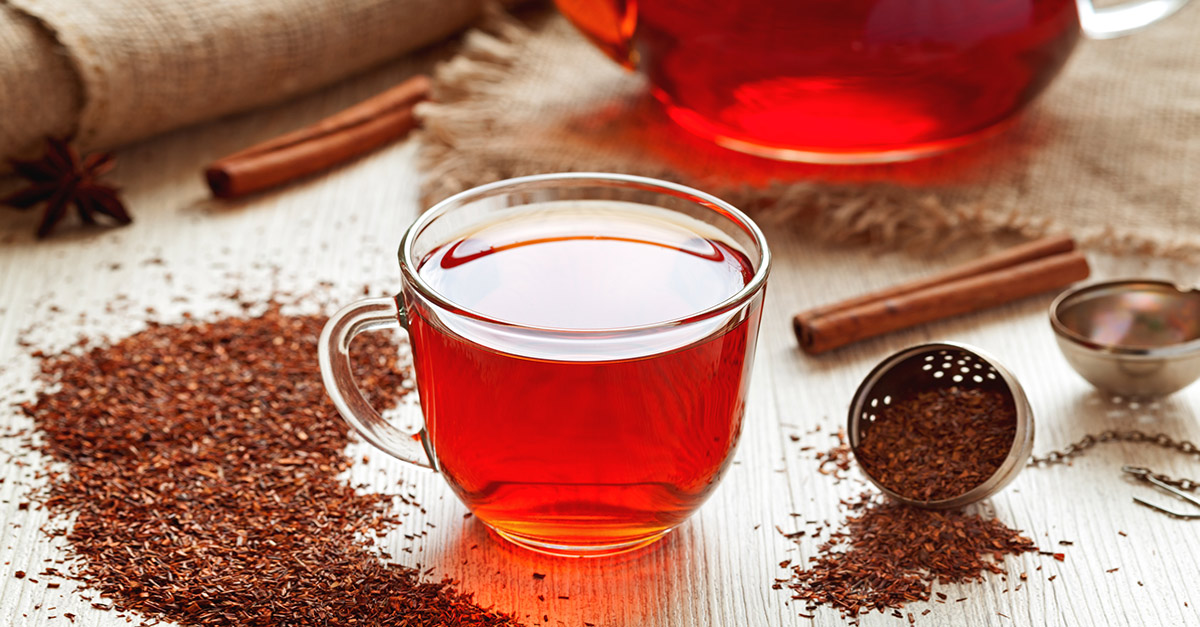 Rooibos (pronounced as roy-boss) tea goes around by some other names too, such as red bush tea, bush tea and red tea. With its origins in South Africa, it has long been used as a traditional medicine in South Africa and its neighbouring regions.

The tea, that tastes quite similar to hibiscus tea, is also a powerhouse of flavonoids and is regarded to be helpful in cases of nervous tension, allergies (dermatitis), and various indigestive problems.

Yes, you read that right. Rooibos is a rich source of polyphenols and is used to make a mild-tasting tea containing no caffeine. It is also low in tannins (that interfere with the body’s iron absorption) compared to green or black teas, and has antioxidant and anti-tumoral properties.

Like a lot of other herbal teas, rooibos is also blended with some other ingredients for enhancing the flavor and adding to the health benefits. Mandarin rooibos is one such flavored version of this tea – it is usually laced with dried mandarin orange peels or mandarin orange extract, adding a citrus punch to it. Mandarin oranges are smaller versions of the orange and are not to be confused with tangerines and clementines. It can be enjoyed as a hot beverage as well as a refreshing cold iced tea. The advantage of consuming mandarin rooibos tea is that it offers the double benefits of red bush tea as well as those of mandarin orange. Talk about the best of both worlds!

another study, it was revealed that red bush tea also helps in the inhibition of ACE (angiotensin-converting enzyme) activity, thereby lowering the risk of heart disease.2 ACE is an enzyme that indirectly increases blood pressure by constricting our blood vessels.

2. Cares For Your Liver

Mandarin rooibos can also help your liver stay in the pink of health. In a lab study on rats, liver injury was induced by carbon tetrachloride. Consumption of red bush tea reduced the extent of cirrhosis in the liver. Simultaneously, rooibos tea significantly suppressed the increase in plasma activities of aminotransferases (ALT, AST), alkaline phosphatase and billirubin concentrations—all markers of liver functional state. The study concluded that rooibos tea has a protective effect on the liver.3

Mandarin red bush tea contains a diversity of polyphenols, including flavonoids, considered to be largely responsible for its health promoting effects, including combating obesity. It does so by doing a fine job of managing leptin, the hunger hormone. If you feel hungry all the time, leptin is the one that’s largely responsible. Research has shown that regular consumption of hot rooibos tea leads to a decrease in leptin secretion, promoting satiety and making you feel less hungry. It also affects fat cell metabolism.9