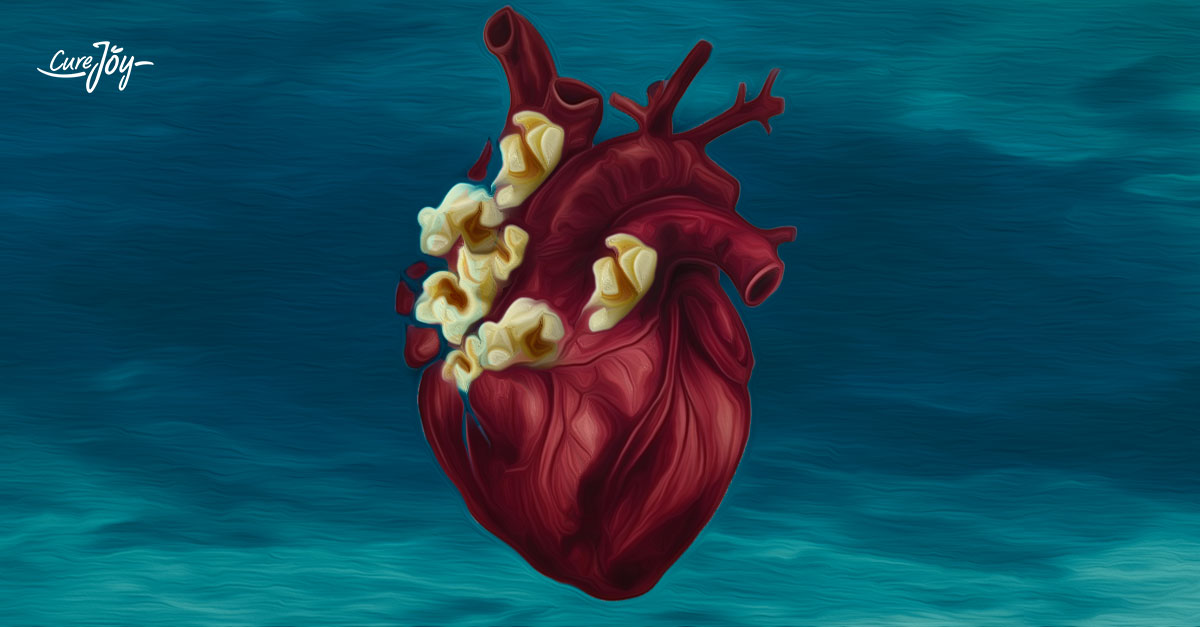 Popcorn is a delicious and relatively low-calorie, fiber-rich snack that’s quick to make. But the convenience of microwave popcorn may be overshadowed by the potential health risks it presents. The typical bag of microwave popcorn isn’t just corn and oil as you’d expect. It also has artificial flavoring agents to create the buttery taste, plus lots of salt, and sometimes even trans fats. Here’s how that plays out for your health.

Microwave popcorn, like so many other processed and packaged snacks, often contains trans fats. In fact, it is among the foods most likely to contain trans fats, along with ready-made frosting, stick margarine, frozen pizza, and coffee creamer. There’s a move to significantly cut down or eliminate trans fats from such snack foods because of all the possible health risks, including heart attacks, from excessive consumption of trans fats.1

The United States Food and Drug Administration has tightened its norms on the use of partially hydrogenated oils (PHOs), the likes of which are found in microwave popcorn too. They caution that PHOs can cause the levels of low density lipoprotein cholesterol to rise in the body, raising your risk of heart disease. Manufacturers have been given a period of three years beginning 2015 to modify their products to completely eliminate these artificial trans fats (natural trans fats from meats and dairy can’t be removed and occur naturally in these foods). Until then, they advise you as consumers to minimize your intake of trans fats and to read labels to avoid such foods.2

According to some reports, a suspected carcinogen perfluorooctanoic acid (PFOA) found in bags of microwave popcorn may be responsible for as much as 20 percent or more of the PFOA levels found in the average American resident’s blood. While nonstick pans and teflon have come under scrutiny for possible carcinogen content, an FDA research team found that grease repellant coating of packaged food wrappers, like the kind used in microwave popcorn bags, have fluorotelomer coatings. Microwave popcorn bags were also found to have the highest amount of coating – about 25 mg per square decimeter. Some fluorotelomers can degrade to form PFOA when the bag is heated.

Advertisements
also found that an alarmingly high amount of the substance migrated to the popcorn oil from the bags. Even more than from nonstick cookware when it is first heated to over 175 °C. Toxicologists estimated that you’d end up having 110 μg of fluorotelomers or as much as 0.017 ppb of PFOA in just one bag. And according to scientists, that is not an insignificant amount, especially if you look at regular consumption over time.3

Salt contains a lot of sodium which in large quantities could cause high blood pressure, stroke, and heart attacks. It could also damage your kidneys, aorta, heart, and even bones. But salt also gives food its “more-ish” taste. And that’s true for microwave popcorn too! The rich saltiness combines with the buttery flavor to make you reach for handful after handful of the snack. And that’s how you could easily end up having too much sodium with a bag of popcorn. A higher intake of sodium and salty foods has also been connected to a raised risk of stomach cancer.4

Propyl Gallate May Cause Stomach/Skin Problems And Raise Cancer Risk

Propyl gallate, a chemical used in the packaged food industry, acts as a preservative, preventing spoilage of fats in microwave popcorn.5 The white powder may, however, cause skin rashes and stomach problems. There are also fears that it could raise the risk of cancer.6

Advertisements
butter flavoring in microwave popcorn contains diacetyl which if inhaled continuously over time could cause lung function abnormalities. Researchers found that people working in a microwave popcorn facility had higher than normal rates of abnormalities and chronic obstructive pulmonary disease (COPD)-linked mortality than the population average. This was especially so among workers who had been employed in the period before the company cut down diacetyl exposure in their production process.7 Whether this level of cumulative exposure is possible in a home environment even among heavy consumers of the product is debatable. However, prolonged exposure does cause these issues.

Higher Risk Of “Popcorn Lung” From Diacetyl In Flavoring

Microwave popcorn line workers at factories have also been seen to be at risk of bronchiolitis obliterans or popcorn lung as a result of cumulative diacetyl exposure.8 This lung condition is irreversible and can leave a patient with inflammation in the bronchioles, the tiniest airways in your lungs. This causes excessive scarring that can block your airways. You might notice shortness of breath, a dry cough, wheezing, and fatigue.9 Many workers are on lung transplant waiting lists.

As these harmful effects of exposure were discovered, rules changed, making it mandatory for workers who were in microwave popcorn packaging plants to be given respiratory protection.10 The National Institute for Occupational Safety and Health puts the recommended exposure limit in their draft at 5 parts per billion (ppb) during a 40-hour work week.11