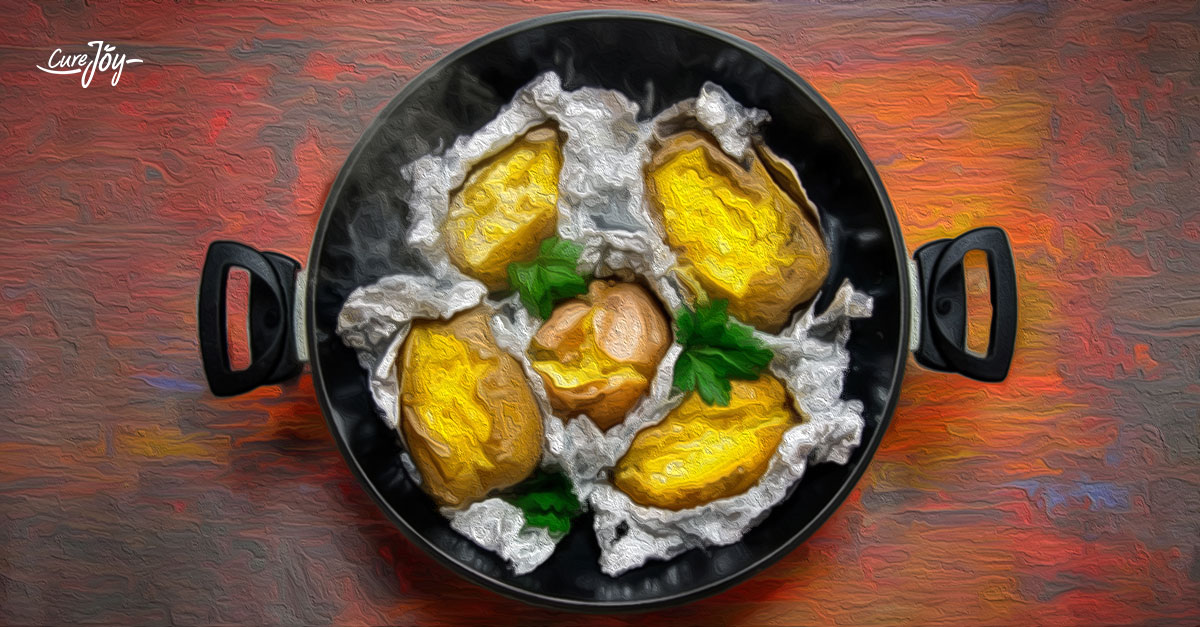 Whether it is to grill or bake your food, wrap up leftovers in, or pack food for easy reheating in the oven, aluminum foil makes cooking convenient and mess-free in so many ways. But could this convenient kitchen tool be harming your health? While the Aluminum Association stands by their metal, saying that the scientific evidence reveals no harmful effects from normal exposure, there are other voices that caution against its use in cookware or even aluminum foil. Here’s a closer look to see how things stack up.

Aluminum Leaches Into Food From Foil: Temperature And Acidity Make A Difference

The main concern around aluminum foil is that the metal leaches into your food, raising its content in your body. As it turns out, the metal does, in fact, seep into the food when you cook in it. And factors like the acidity of the food and the temperature at which you’re cooking modulate how much of it enters your food.

One piece of research studied the change in levels of aluminum in food before and after it was cooked in aluminum foil. Researchers found that cooking food at high temperatures even for a short duration could cause more leaching. In their study, samples of meat and poultry baked at 250°C for just 20 minutes saw the concentration of the metal rise by between 153 and 378 percent. On the other hand, those baked at 150°C for 60 minutes went up by a lower amount – 76 to 115 percent.1

Advertisements
acidity of the food you’re cooking also makes a difference. So if your food is highly acidic, it is likely to cause more of the metal to leach into the food.2 The study above showed that the pH value of the salt, spices, and food all impact the amount of aluminum that is leached into the food.3

Health authorities like the WHO say that aluminum content of food, water, and medication does not normally pose a risk to most people.4 And this includes the aluminum you may find in your food or drinking water, medicines, cosmetics, or even cookware.5

This is because when you consume aluminum through food or water, only a very small fraction of it is actually absorbed by your body while the rest is expelled in the form of urine and stool. As per estimates, you absorb anywhere from as little as 0.2 percent to 1.5 percent of all ingested aluminum.6 Which means foil on its own isn’t a problem.

Your body can also release small amounts of aluminum quite efficiently, so you won’t end up accumulating too much in your body from foil alone. According to the Joint FAO/WHO Expert Committee On Food Additives, it is safe to have about 2 mg/kg of your body weight every week.7 But no more than this.

Foil Use Isn’t Harmful, But Watch Out For Dangerous Cumulative Effect

Stay well within the safety limits of aluminum, whether it is from foil or food, and you should be okay. The trouble is when the cumulative effect of the metal from water, food, and conveniences like foil begin to push the levels of intake higher. The average daily dietary aluminum intake seems to be 6 to 14 mg per day among both teenagers and adults, coming from grains, dairy, beverages, desserts, and foods that have higher aluminum levels. Certain foods like cayenne pepper, tea, baking powder, processed cheese do contain more aluminum while other foods that have aluminum-containing additives. Having these in very high amounts may also cause you to inadvertently have too much of the metal.8

Aluminum is a known neurotoxin that can result in dementia as well as cognitive deficiency when the metal accumulates in the brain. It may also interfere with the normal function of your central nervous system.9 Aluminum exposure has also been listed by some researchers as a possible risk factor for dementia.10

Exposure to the metal has been linked to neurodegenerative diseases like Parkinson’s dementia and Alzheimer’s disease.11 Some reports show a correlation between areas with high aluminum content in water and a high incidence of Alzheimer’s.12 Researchers have gone so far as to strongly recommended immediate steps for reducing human exposure to aluminum – a metal they term “the single most aggravating and avoidable factor” contributing to risk of Alzheimer’s disease.13