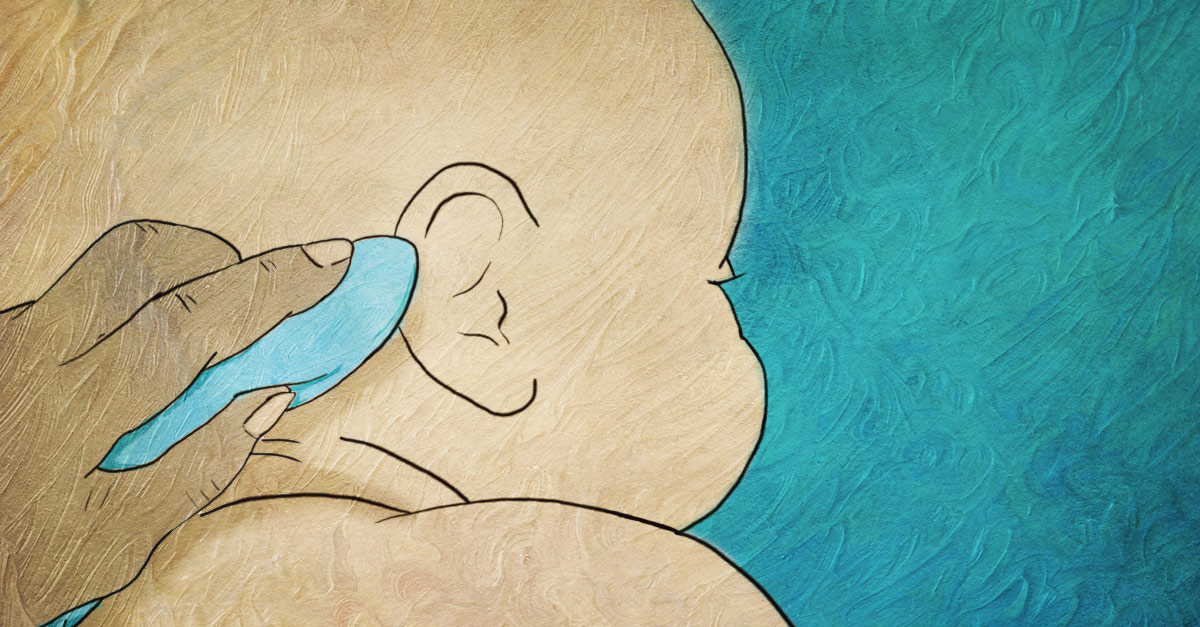 Even though you’ve spent months getting ready for your baby, now that he or she is here you may be faced with a range of bewildering questions. Here’s a question that even the most diligent of us tend to miss while preparing for a baby – how do you clean earwax from your baby’s ears? If you’ve been mulling over the dark, waxy substance in your baby’s ear and whether you should remove it, read on.

Earwax or cerumen is a colorless soft wax that’s produced by glands in your ears. It turns a yellowish brown color and becomes harder when it comes into contact with air. And what you would think of as muck or dirt actually has some very important functions. Earwax waterproofs the lining of the ear canal and has antifungal and antibacterial properties. It also acts as a filter for your baby’s ears and protects their ear canal from infection, foreign objects, and trauma. Plus it’s a natural cleanser since it gathers hair, dead skin cells, and dirt and carries all this gunk along with it when it moves out of your ears. In fact, without sufficient earwax, human ears might feel uncomfortable and itchy. So don’t assume your baby’s ears are dirty just because you spot earwax.1 2

Your Baby’s Ears Clean Themselves

Now, even better news. Ears, whether yours or your baby’s, clean themselves, so you don’t really need to chip in. So how does this auto-clean function work? The cells in your ear canal have a unique property – they migrate. In fact, if you dot the inside of your ear canal with a drop of ink (we’re not suggesting that you actually do this, though!) you would find that, over the course of a few weeks, it would be carried outward by cells in the ear canal and eventually out of the ear. This movement of cells also naturally shifts earwax out of your ears. Normal jaw movements such as those made when we talk or eat help this process. So, your baby’s earwax will typically move to the ear opening, dry up, and fall out without your doing a thing.3

Most of us are guilty of using cotton buds or swabs to clean inside our ears. But this practice can do more harm than good – more so with your baby. Inserting a cotton bud into your baby’s ear canal can push earwax deeper inside, where it may get stuck and cause an infection. It even raises the danger of rupturing their eardrum. And it goes without saying that it’s never a good idea to insert pointed objects like pencils or bobby pins inside the ear.4

You Can Gently Wipe Outside Of The Ears To Clean Them

But your baby’s ears do need cleaning – on the outside. Use a cotton bud or clean washcloth to wipe the outside of each ear with warm water and make sure you clean behind their ears too. You can clean your baby’s ears when you bathe them. Under no circumstances, should you poke inside the ear with your fingers or the washcloth.5

While earwax usually tends to move out of the ear naturally, it can sometimes block your baby’s ear. This may happen when you insert something in the ear such as a cotton bud or a hearing aid, which can push wax further inside the ear, clog it, and even cause an infection. Some children may also have excessive earwax and the buildup of earwax can lead to an earache, ringing in the ear, or trouble hearing. But unless you see signs that the earwax is causing a problem, there’s no reason to disturb it.

Advertisements
with discomfort in their ears tend to tug at them or rub them. You may even be able to see the buildup of hardened earwax when you peer into your baby’s ear. But remember, only a medical professional will be able to determine if the earwax is indeed problematic and if it should be removed. Do not attempt to remove it on your own without the doctor’s go-ahead.6

After checking your baby’s ear, your doctor may advise you to use ear drops, mineral oil, or olive/almond oil to soften the wax. The softened wax may then fall out on its own or may need to be removed by irrigation. During irrigation, a bulb syringe is filled with warm water and gently streamed into the ear. After a few minutes, the water and wax flow out when the head is tilted. Your doctor may also remove the wax manually using a device known as a curette which has a scoop at the tip to help remove the wax.

Advertisements
do keep in mind that your baby’s ears are really delicate. Do not try any of these remedies at home unless your doctor advises it or shows you how to do so.7 This bit is really best left to the professionals!