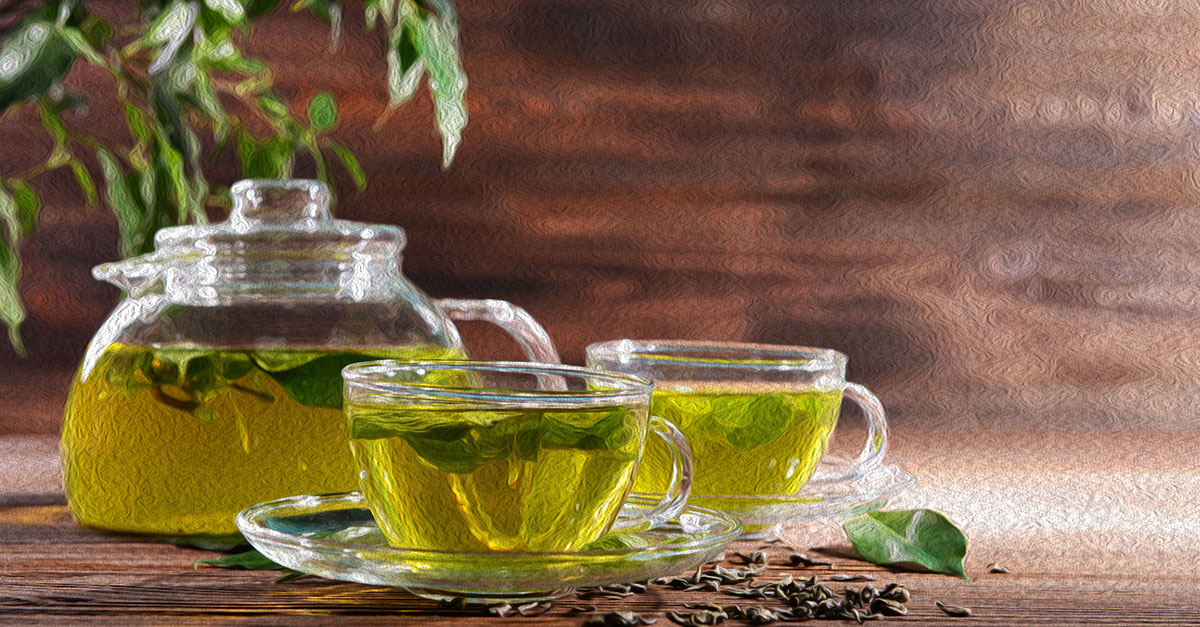 If you are a tea drinker or someone who’s got health and fitness on their mind, chances are green tea has been on your radar for some time now. And while it has plenty of antioxidants like catechins which can help with everything from reducing cardiovascular risk factors and boosting immunity to possibly protecting against cancer, green tea also contains caffeine. And too much of that could be problematic (as you’ll see in a bit). So how much caffeine does a cup of green tea contain? How does it compare to a cup of coffee? Is there an upper limit you should set for yourself on daily green tea intake? Here are some answers.

The average 8-ounce (about 240 ml) cup of green tea will have somewhere in the zone of 20–45 mg of caffeine.1 The Institute for Scientific Information on Coffee pegs the number at 31–71 mg per 8 oz serving.2 Of course, this number may vary depending on various factors. As one report revealed, there is a huge variation in the caffeine content of your cup of green tea depending on what brand you’re buying and how you brew it, going as low as 15 mg and as high as 75 mg. One decaf brand had 7.6 mg of caffeine.3

How You Brew Your Green Tea Affects Caffeine In Your Cup

Green tea is usually supposed to be brewed (sub-boiled) at a temperature of around 75–90°C. This lower recommended brewing temperature means a green tea infusion should have lower caffeine content than a cup which has been steeped in boiling hot water. If you deviate from this and use boiling water for your green tea, the caffeine in your cup could be higher than indicated on the packaging.4

Advertisements
caffeine intake is generally taken to mean something to the tune of 150 mg–300 mg a day.8 You’ll need to look at your daily caffeine intake from not just green tea, but these other drinks as well to determine how much caffeine you’re consuming per day. Don’t forget to factor in the chocolate as well if you eat some regularly – there’s 60 mg of caffeine in 30 gm of dark chocolate and 6 mg in 30 gm of milk chocolate.

Why You Need To Watch Your Caffeine Intake

If you’re pregnant, don’t consume more than 200 mg of caffeine a day. To be extra safe, keep it to under 100 mg. Check your brand of green tea for its caffeine levels and do the math on how much is safe.9

While green tea has so much going for it, its caffeine content merits a closer look. Having too much caffeine every day is not a good idea. Here’s why.

Advertisements
a stimulant, caffeine raises your heart rate as well as blood pressure.10 It can also hamper the absorption of folate and iron, two essential nutrients.11

For women who have a baby on board, this impact on folate and iron absorption is especially critical due to the role they play in maintaining a healthy pregnancy. While the former is essential for generating blood in the baby on board, the latter is crucial to protect against birth defects. Having too much caffeine can raise the risk of growth retardation of the baby while in your uterus and may also raise the risk of having a miscarriage.12

Advertisements
you’re having sleeping trouble or insomnia, drinking green tea may not do your body any favors. The caffeine in it will keep your mind buzzing into the wee hours, depriving you of a good night’s rest. Having 400 mg of caffeine can be just as disruptive to your sleep whether you have it at bedtime, 3 hours earlier, or even as much as 6 hours before you sleeping. But the earlier you have it, the better, giving more time for the caffeine to leave your system.13 If you are really cutting back on your caffeine intake, a caffeine-free option like a floral or herbal brew made with ingredients like ginger, lemon, honey, and hot water.

Green tea certainly has plenty of goodness so it is a drink you can enjoy regularly, especially if you have a taste for it. Just remember not to go overboard and drink too much and to keep an eye on your overall daily caffeine intake. However, if you need to cut back on caffeine significantly, you may need to bid this favorite cuppa of your goodbye for a while.