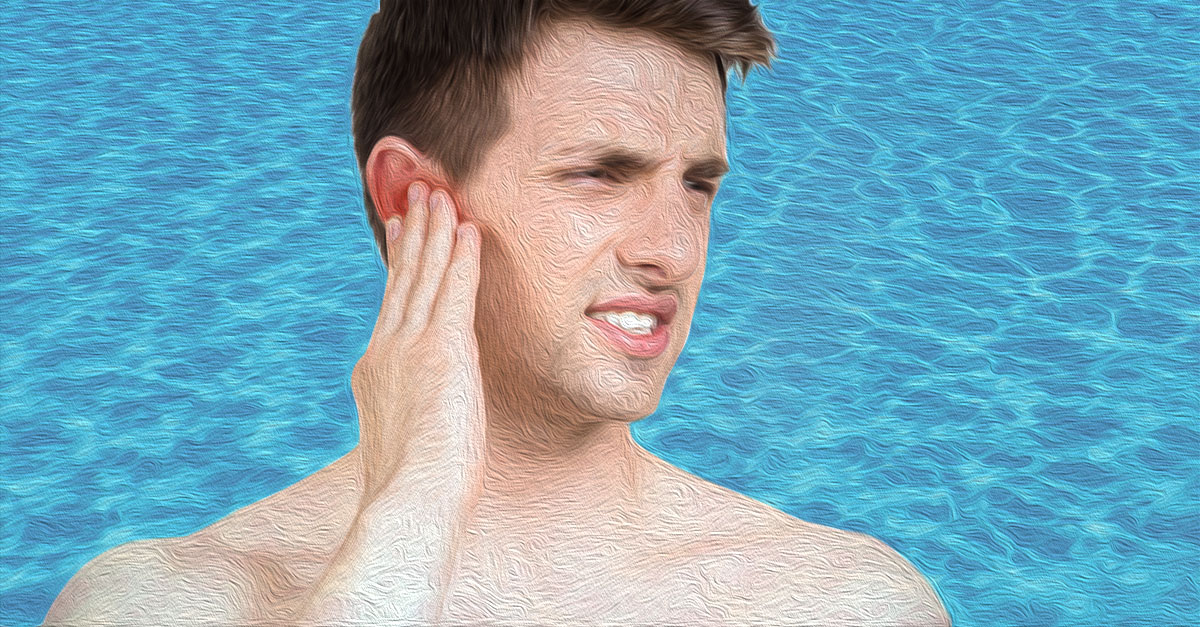 A fairly common condition that affects 1 out of 10 people at some point, swimmer’s ear or otitis externa causes inflammation in your ear canal or outer ear. It’s called “swimmer’s ear” because excessive exposure to water can increase the vulnerability of the ear canal to inflammation. Symptoms like pain, itchiness, discharge from your ear, and temporary hearing loss can be indicative of this condition. While swimmer’s ear is mostly caused by a bacterial infection, fungal infections, allergies, or irritation may also be responsible.

Although it doesn’t usually cause complications, otitis externa can, in some cases, spread to bone which surrounds your ear, lead to an abscess, or result in a torn or perforated eardrum. Your doctor may prescribe antibiotic eardrops and pain medication to deal with this swimmer’s ear. Many natural remedies can also help you deal with this condition.1 Here’s what you could try:

1. Keep Your Ear Dry And Clean

If you have swimmer’s ear, water and dampness can aggravate the condition. So make sure your ear doesn’t get wet. Use a shower cap while you bathe to avoid getting water in your ear. And don’t go swimming till it heals completely. It’s also important to remove any debris or discharge from your ear by swabbing the outer ear. This can help ease symptoms and prevent complications. But be gentle and take care not to insert the swab or a cotton bud into your ear.2

3. Use A Vinegar And Alcohol Eardrop

If your eardrum is torn or perforated, refrain from using eardrops or herbal remedies in your ear.4 Also, do remember to do a patch test before using any herbal remedy to make sure that you are not sensitive to it. You will also need to see a doctor if home remedies don’t offer sufficient relief.

Vinegar and alcohol is a tried and tested remedy for swimmer’s ear. Mix vinegar and rubbing alcohol in equal quantities and put a couple of drops in your ear. So how does it work? The alcohol helps remove water from your ear as it mixes with water and then evaporates. Meanwhile, the acidity of vinegar inhibits the growth of infection-causing bacteria.5

Mullein flower oil, essentially the extract of Verbascum tharpus, is a famed traditional remedy for earache and infection. It is thought to have anti-inflammatory and analgesic effects.6 Research also shows that it can tackle bacteria which cause ear infections.7

Advertisements
a bottle of mullein oil in a pan of water on low heat till it is comfortably warm. Use an eye dropper to instill a drop of this medicinal oil into the affected ear. Remember to test the temperature of the oil on your arm before you use it to make sure that it’s not too hot.8 9 Again, remember not to try this remedy if your eardrum is perforated.

Garlic has traditionally been used to tackle infections and can come in handy with ear infections too. Studies show that garlic extract can inhibit the growth of bacteria such as Staphylococcus aureus which can cause swimmer’s ear. Moreover, it has anti-inflammatory properties.10

Advertisements
prepare garlic infused oil, crush a clove of garlic and heat it in a little olive oil. After the oil cools down, strain out the crushed garlic and instill a couple of drops of this medicinal oil in the affected ear.11 You can also buy and use a garlic extract-based ear salve.

6. Use A Tea Tree Oil Salve

Tea tree oil can help tackle ear infections too. One study tested the impact of tea tree oil on microorganisms which cause swimmer’s ear. Swabs from the ears of people with this condition were taken and exposed to tea tree oil. It was found that a vast majority (71%) of infection-causing bacteria and yeast were susceptible to the antimicrobial powers of tea tree oil.12

Tea tree oil can be very strong so it would be safest to buy a calibrated ear drop or salve with tea tree oil. In fact, some experts warn against using it in the ear directly as it may damage the inner ear.13 14

Dabbing a bit of chamomile oil around and behind the ear can also help soothe the pain and discomfort.15

Another herbal remedy with powerful antimicrobial properties, chamomile oil can also be used to treat swimmer’s ear. Studies have found this medicinal oil to be effective against ear infection-causing bacteria.16 Chamomile oil also has a pain-relieving effect.17 18 Chamomile also has anti-inflammatory properties. Mix a few drops of the oil in a drop or two of warm olive oil and apply this to your ear.19