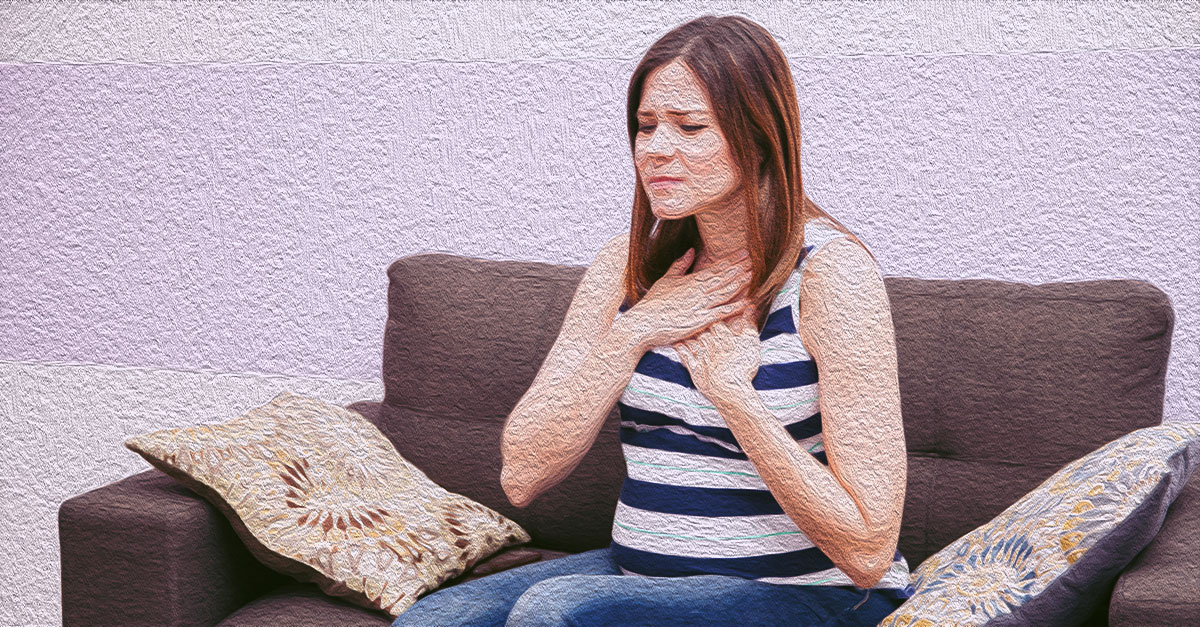 On the one hand, you are so hungry that you could eat a horse every two hours. On the other, you feel like there is a little fireplace burning constantly in your chest, flaring up with everything you eat. Your tummy is bloated and nausea and stomach cramps strike from time to time. If indigestion and heartburn have reduced you to a bundle of nerves even as you eagerly await your bundle of joy, you are certainly not alone. Up to 80% of pregnant women suffer from indigestion at some point. And what’s more, it seems to get worse as your pregnancy progresses and is a common complaint from the 27th week onward.

A constant pain in the upper abdomen, similar to the one caused by indigestion but which cannot be tackled by lifestyle changes or antacids may be a symptom of pre-eclampsia, a pregnancy complication with high blood pressure. It’s vital that you see a doctor and get this checked.[ref]Headaches and indigestion during pregnancy. Healthdirect, Australia.[/ref]

Indigestion during pregnancy is mostly a result of hormonal changes and the pressure exerted on your stomach by your growing baby. These changes often cause acid reflux, the most common cause of indigestion, which occurs when stomach acid flows back up from the stomach into the esophagus (food pipe) and irritates the lining (mucosa). Your doctor may recommend antacids but some simple natural remedies and lifestyle changes can help also help immensely.[ref]Headaches and indigestion during pregnancy.

You are more likely to get indigestion if your stomach is very full. Rather than having three large meals a day go for smaller meals and increase the number of times you eat. And remember to have a varied, healthy, balanced diet so that your baby and you get all the nutrients you need.

Sitting up straight while you have your meal can ease pressure off your tummy. Also, prop up your shoulders and head when you settle down for the night. This keeps stomach acid from going up into your food pipe while you are sleeping. It’s also a good idea to have your food at least 3 hours before bedtime. Going to bed on a full stomach makes it more likely that stomach content will go into your food pipe and cause heartburn at night.

4. Munch On A Banana

Yummy bananas can also help ease indigestion. According to a study, 75% of people troubled by indigestion were completely or partially relieved of the condition when they took banana powder.[ref] Arora, Anil, and M. P. Sharma. “Use of banana in non-ulcer dyspepsia.” The Lancet 335, no. 8689 (1990): 612-613.[/ref] Bananas may protect your stomach by enhancing the mucous layer lining it. They also contain a flavonoid called leucocyanidin which make bananas a natural antacid.[ref]10 benefits of eating a banana.

Advertisements
Council For Health, Research And Development.[/ref] So peel and enjoy a ripe banana to get rid of indigestion.

Turmeric is known to have a wide range of healing properties and easing symptoms of indigestion is one of them. One study observed that having turmeric 4 times daily – once after each meal and then once before bedtime – improved indigestion in 87% of the participants.[ref] Thamlikitkul, V. I. S. A. N. U., N. Bunyapraphatsara, T. Dechatiwongse, S. Theerapong, C. Chantrakul, T. Thanaveerasuwan, S. Nimitnon et al. “Randomized double blind study of Curcuma domestica Val. for dyspepsia.” J Med Assoc Thai 72, no. 11 (1989): 613-620.[/ref] As with ginger, you can use turmeric in your cooking or make yourself a cup of turmeric tea. Turmeric is widely used as a culinary spice in Southeast Asian communities and forms a part of the regular diet of pregnant women there. Just make sure you stick to normal dietary amounts as excessive amounts may lead to uterine contractions.[ref]Turmeric.

Honey has traditionally been used to tackle indigestion and is a remedy backed by science too. Studies have shown that manuka honey is effective against Helicobacter pylori, a bacteria that is often implicated in cases of indigestion.[ref]Al Somal, N., K. E. Coley, P. C. Molan, and B. M. Hancock. “Susceptibility of Helicobacter pylori to the antibacterial activity of manuka honey.” Journal of the Royal Society of Medicine 87, no. 1 (1994): 9-12.[/ref] Have a spoonful of sweet honey on its own or mix a little ginger juice and honey to combat indigestion.[ref]Davidson, John. The Miracle of Honey. JD-Biz Corp Publishing, 2013.[/ref]

Advertisements
your digestive system all the help that you can as it deals with your pregnancy. Here are a few foods that can lend you a hand:

Some simple rules like cutting down on caffeinated drinks and spicy or fatty foods can help ward off indigestion. But your digestive system might have its own quirks too. For instance, you might find oranges to be too acidic for your tummy, though they can actually stimulate digestion. Someone else might find that having fruits in the evening doesn’t agree with them or that they are not bothered by spicy foods. That’s why it’s a good idea to keep a food diary and figure out eating patterns and foods that don’t agree with you and plan your meals accordingly.[ref]How to Fix 6 Common Digestive Problems. AARP.[/Ref][ref]Indigestion (Dyspepsia). National Institutes of Health.[/ref] Soon enough, you’ll be able to deflect the triggers and feel better.