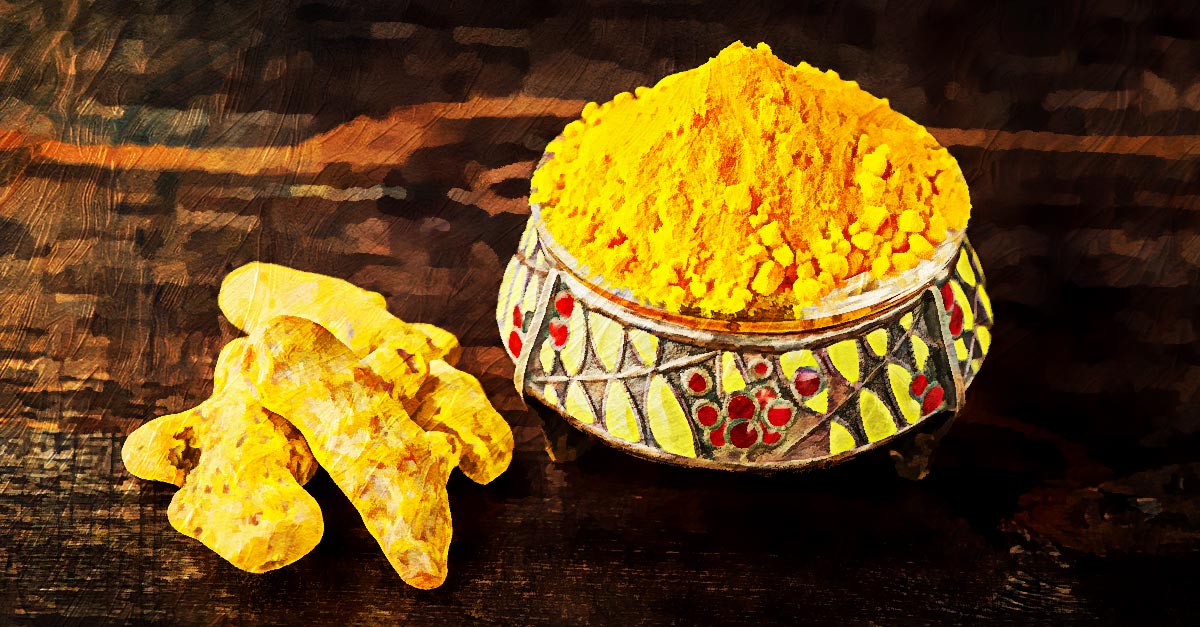 This year’s hottest new global beauty and health trend isn’t from your favorite mall or beauty salon but from your spice drawer. Turns out, that vibrant yellow powder you’ve been plonking into curries for years and years has had quite a bit of a revival in the recent years!

With modern medicine churning out publication after publication, declaring the health benefits of turmeric and Google’s US Food Reports terming it as a “rising star”, the future looks golden for this humble, knobbly root.1 Since then, the spice has made an appearance in Insta-worthy Starbucks lattes, gelatine capsules, and even on the faces of famous celebrities in the form of do-it-yourself beauty masks.

While the world continues to fuss over the powers of turmeric, we Indians can’t help but feel a little amused. For a race who uses turmeric in everything – from gravies and religious offerings to fertility-boosting potions and anti-tan pastes, we and our ancestors, both, have been witness to the miracles of this fabulous root. Let’s take a quick look into the story of turmeric, that’s so much more than plain ol’ curry powder! 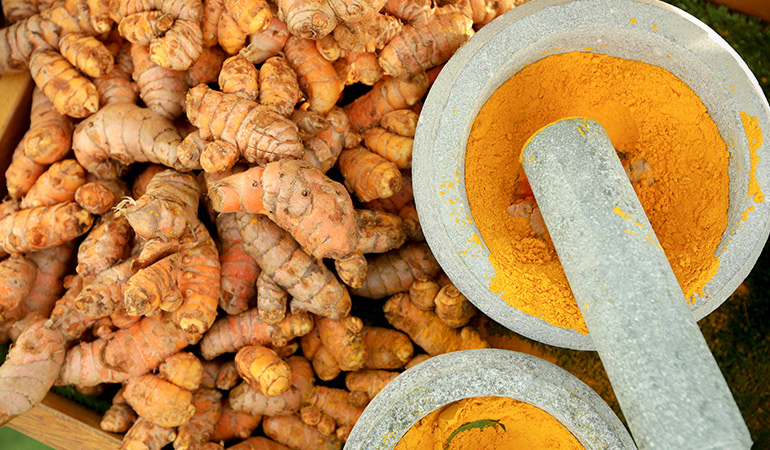 Turmeric has a surprisingly long history of medicinal and beauty usage that dates back to nearly 4000 years. According to some sources, turmeric emerged as an important component of Ayurvedic medicine around 500 BCE. Ayurveda, the ancient Indian art of natural healing, found numerous uses for turmeric: from alleviating congestion by inhaling fumes from burning turmeric to healing skin conditions like smallpox and wounds with turmeric paste. This earned the root a number of titles in Sanskrit, namely jayanti (one that wins over diseases), vishagni (killer of poison), and jawarantika (which cures fevers). 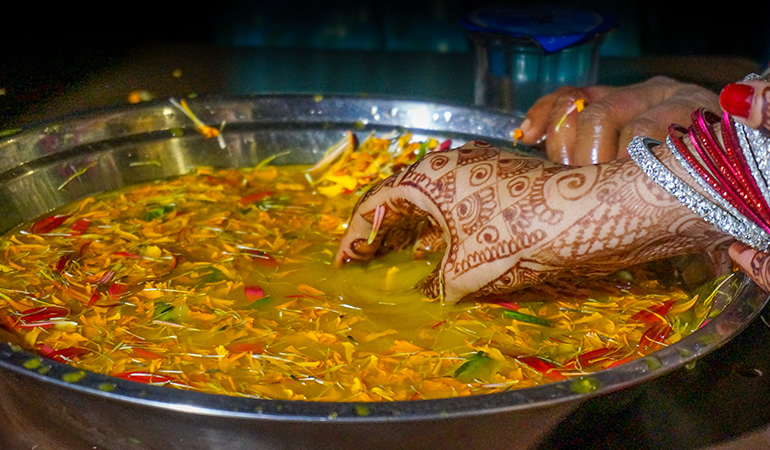 Because of its ability to combat so many ailments, turmeric was not only synonymous with purity, but was also given the names bhadra, mangalya, and soubhagaya which mean auspicious or lucky. This is why it became such a large part of Indian wedding customs. Brides are bathed with turmeric even today, which is believed to bring out the woman’s inner glow, wash away her internal and external impurities, and make her appear more beautiful. Strings are dyed yellow with turmeric paste strung with beads and then tied around the bride’s neck by her groom, an indication of the holy union between the man and the woman. Indian newlywed brides are also made to drink milk and turmeric, a concoction that is believed to prepare their bodies for childbearing. 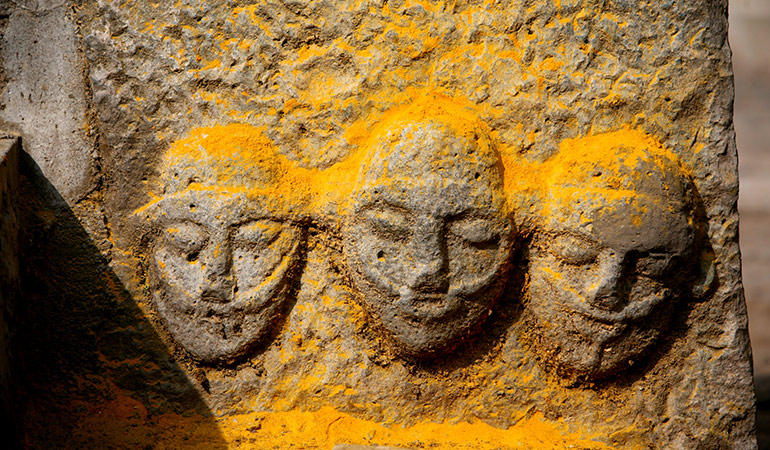 Hinduism is linked strongly to the color yellow. Yellow is said to represent the space between chastity and sensuality as well as the sacral chakra – one of the important centers of spiritual power associated with energy, compassion, grounded intuition, emotional stability, and a zest for life. Worshippers therefore very often use turmeric paste to anoint statues and images of Hindu deities in religious ceremonies, while many Indians wear dried turmeric root as an amulet around their arms even today, in an attempt to ward off evil energies.

Advertisements
with anything else that comes linked with superstitions, turmeric piqued the interest of many scientists and researchers. Today, over 3000 publications later, turmeric has been acknowledged as the “miracle root” that exudes potent antimicrobial, anti-inflammatory, and antioxidant properties.2

This explains why hipster cafes all over the world are now whipping up turmeric lattes and skincare brands are going all out to push their turmeric-infused reparative creams and anti-aging supplements. Luckily for us Indians, we have ample access to these gorgeous golden roots and cheap, yet effective DIY turmeric beauty solutions that have been fondly passed down throughout generations of grandmothers and mothers. 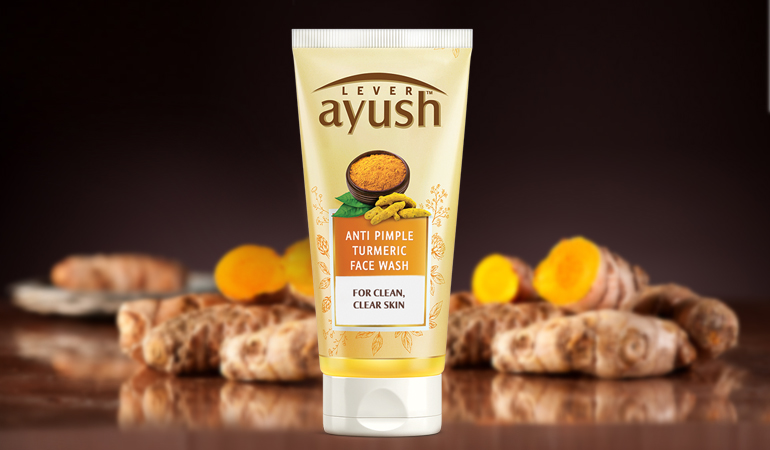 Of course, some of us Indian millennials working 9-hour shifts don’t have enough time to rustle up potions and facemasks. This is when wellbeing-focused brands like Lever Ayush comes in. Backed by 5000 years of Ayurvedic wisdom, Lever Ayush has worked hard over the years to bring to you a range of high-quality, organic products that give you the true benefits of turmeric sans the unnecessary chemicals. Carefully curated with authentic recipes and processes prescribed in the ancient Granthas, Lever Ayush leaves you spoilt for choice – be it a turmeric face cream targeted to fight pigmentation or a body cleansing turmeric soap.

Advertisements
beauty-boosting merits of this bright yellow spice backed by years of Ayurvedic practice make it far from being the latest superfad. Research even says that a dose of turmeric has proven to be an effective elixir for troubling skin conditions such as acne, psoriasis and to prevent premature aging. So this summer, maybe ditch that heavy foundation and pore-clogging moisturizer for some turmeric-infused skin treats? Trust us, it will be the wisest beauty swap you’ve ever made!