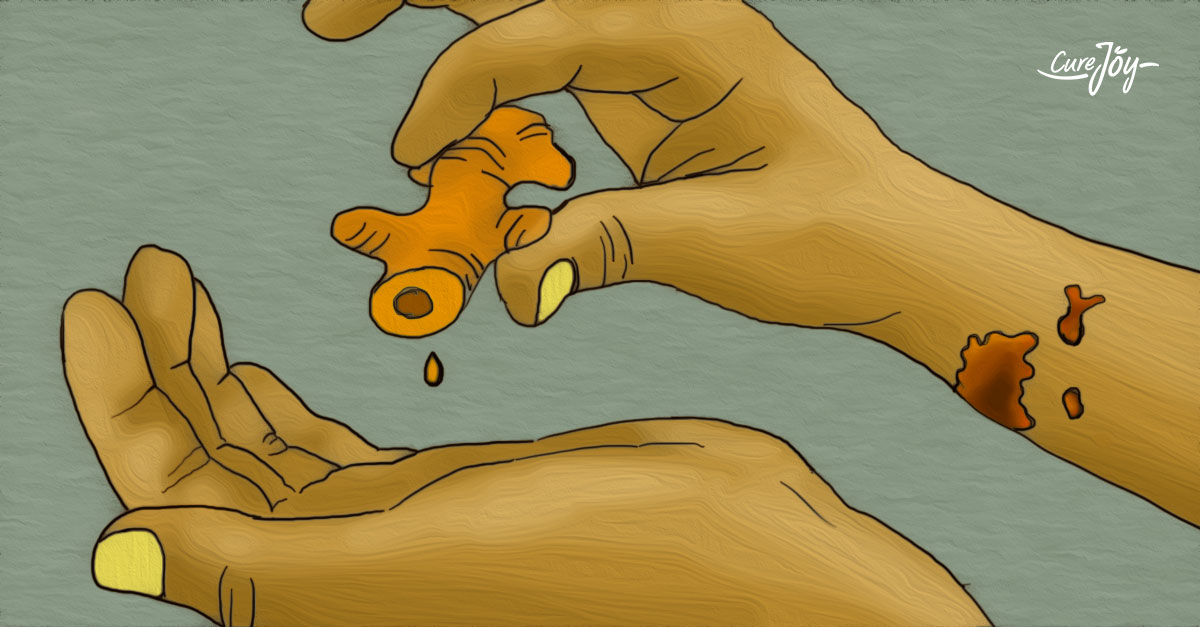 Turmeric has long been used as a spice that adds flavor, color, and aroma to dishes in Southern Asia. Thanks to its medicinal properties, it also occupies pride of place in ayurveda and traditional Chinese medicine. In fact, you may already be using turmeric powder or tea as a natural home remedy for indigestion or pain. Take it up a notch by leveraging the benefits of another essential component of turmeric – its essential oil!

Turmeric essential oil is obtained through steam distillation of the rhizome and has compounds like ar-turmerone, α-turmerone, and β-turmerone which boost your health in many ways. It is readily available in aromatherapy or herbal remedy stores. So get a bottle of the good stuff and use it for the following benefits. Do note that while turmeric essential oil may have more benefits, we’ve only listed the ones backed by studies.

Fungal skin infections like ringworm, athlete’s foot, or jock itch have plagued most of us at some point or the other. And turmeric oil might provide an easy cure for them. According to research, this oil can act against dermatophytes like Trichophyton

Advertisements
rubrum which cause skin infection. One animal study found that when diluted turmeric oil was applied to areas with the fungal skin infection, lesions caused by the infection disappeared within a week.1 Simply dilute in a carrier oil and dab on affected areas for relief.

Steam inhalations are generally useful for loosening mucus and clearing blocked airways. Want to amp up the power of your stem inhalation? Add a few drops of turmeric oil to it. Studies have found that inhaling the vapor of turmeric oil can remove sputum, reduce coughing, and ease asthma symptoms.2

3. Can Protect The Liver

Thanks to ar-turmerone, curlone, and ar-curcumene, turmeric oil has shown antioxidant activity in in

Advertisements
vitro studies. It can scavenge free radicals and reduce cell damage. In an animal study, mice were given turmeric essential oil for one month. They showed increased levels of antioxidant and antioxidant enzymes in the blood and the liver, which could enhance detoxification of cancer-causing compounds.3 In another study, rats pre-treated with turmeric extract had less liver damage due to methotrexate, a drug used in chemotherapy and to treat autoimmune conditions.4

4. Can Fight Gum And Teeth Diseases

Turmeric oil can help prevent tooth decay as well. A study found that 100% concentrated turmeric oil can exert an antimicrobial effect on Porphyromonas

Advertisements
gingivalis, the pathogenic bacteria that causes periodontitis, an inflammatory condition affecting the periodontal tissues that support the teeth, and eventually loss of teeth. Eucalyptus oil, however, is even more beneficial.5

Add a few drops of turmeric oil to your toothpaste or mouthwash to keep your teeth and gums disease-free.

Advertisements
studies have also found that both ar-turmerone found in turmeric oil and curcumin, one of the main components in turmeric, may be effective at preventing colon cancer associated with inflammation.7

Turmeric essential oil has also been seen to act against mutagenic chemicals, which mutate DNA and may cause cancer, and carcinogens. It inhibits enzymes involved in the activation of carcinogens.8

Neurological diseases such as Parkinson’s disease and Alzheimer’s disease can take quite a toll. Animal studies indicate that turmeric oil may support neural cell regeneration and help people suffering from these progressive conditions. How does turmeric oil work? Studies have found that ar-turmerone in turmeric essential oil inhibits microglia activation. Microglia, cells present in the central nervous system, function as immune cells. There is now a wealth of evidence that activated microglia are a source of multiple neurotoxic factors implicated in the pathology of neurodegenerative diseases.9

oil has been found to raise the level of antioxidant enzymes in the serum and blood of mice. Antioxidants help counter the damaging effects of free radicals which are produced naturally during the process of oxidation in our bodies as well through exposure to external oxidant substances. Free radicals have been implicated not just in aging but also in many diseases such as arthritis, heart disease, Parkinson’s disease, cancer, and cataract. But it may be possible to improve your body’s natural antioxidant defense by taking turmeric essential oil.12 While there aren’t exact quantities earmarked for use, a trained herbal doctor should be able to guide you.

Early Studies Indicate Ingestion Of Turmeric Oil Is Safe, But Be Cautious

Centuries of use of turmeric powder as a spice vouch for its safety. But though turmeric oil is extracted from turmeric rhizomes, it’s not used as widely and, therefore, doesn’t have an established history of safe use. But one study that administered 0.6 ml of turmeric oil thrice a day for 1 month and then 1 ml of turmeric oil in 3 divided doses for 2 months found that there were no signs of clinical, renal, hematological, or hepatic toxicity in subjects.15

But since this is a concentrated form of the oil and one tested minimally in human studies, tread with caution while ingesting turmeric essential oil. Have it diluted with water or milk and let an expert ayurvedic or herbal practitioner guide you on dosage. Also, as a safety measure, do check with your doctor if you plan to consume turmeric essential oil regularly or for long periods of time.