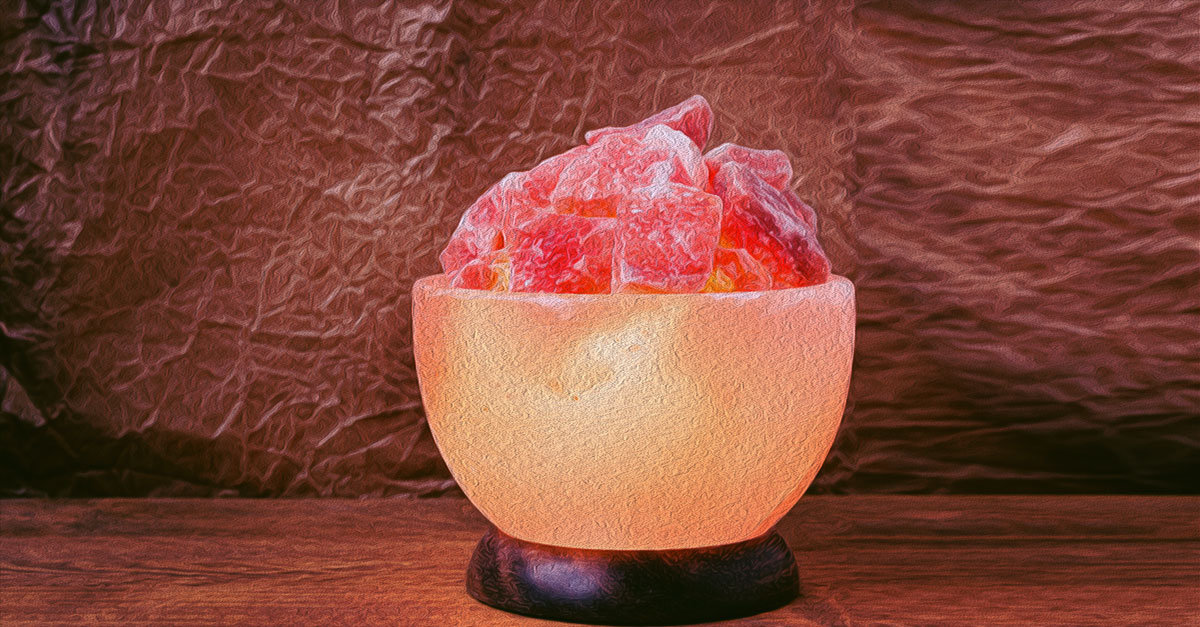 Salt itself is known to be an antibacterial and anti-inflammatory agent, have the ability to remove airborne allergens like pollen, and even help loosen mucus and pacify an oversensitive immune system.2 So shouldn’t lamps made from the mineral-rich Himalayan salt have the same benefits? Or is it a myth? Here’s a closer look.

Advertisements
lamps attract moisture and humidity since the salt is naturally hygroscopic or “water attracting.” Manufacturers claim that the lamps are able to also draw in pollutants or allergens in the air suspended in water vapor – indicating that it may help with allergic conditions like asthma.

At the same time, they also give out healthy negative ions like you’d find in oceans or waterfalls, helping those with anxiety or depression.

Some people who believe in the power of such lamps even say they could help counteract radiation from gadgets like television or computer screens that release positive ions into the environment which can be harmful to you. If that seems like a stretch, it could well be. Not many of these claims are backed by research, though there may be some benefits to the use of salt as a therapeutic agent.

Assuming the lamps were able to generate the level of negative ionization they claim – something that itself is under the scanner – what impact would that have on you? Researchers looked at the effect of the negative air ionization on test subjects and found it caused a mild reduction in depressive symptoms for higher degree of negative ionization and a marginal easing of seasonal affective disorder (SAD) even with lower negative ion levels.

Advertisements
they cautioned that no link could be established between the duration and frequency of ionization treatment and the severity of depression. Negative ionization also made no impact on anxiety or mood. 3 The bigger question is, can your salt lamp afford a high enough degree of ionization?

No Direct Benefit On Sleep

The Himalayan salt lamp has not been seen to help improve sleep. Studies on negative ionizers have shown no effect on sleep either.4

That said, if you were to trade out the brighter lights in your bedroom for a salt lamp, the soft diffused light it emits could be more conducive to falling asleep or getting a good night’s rest. As the National Sleep Foundation points out, exposing your body to artificial light after dark can trigger wake-up messages in your brain and suppress the production of melatonin – the hormone that helps you fall asleep and stay asleep.5 A dim soft light like the salt lamp may be just what you need to nod off.

No Significant Benefit For Asthma Or Respiratory Problems

One of the ways a salt lamp is supposed to help you is to fight off respiratory problems. But while anecdotal evidence suggests benefits of salt cave therapy or the use of a dry salt inhaler for treating mild to moderate asthma, research on halotherapy, where you inhale very finely ground (micronized) dry salt in a salt cave-style environment, hasn’t been as compelling.6 Moreover, one review of research in this area found that there isn’t enough evidence to suggest that halotherapy should be recommended as a means to overcome chronic obstructive pulmonary disease.7 Even if we consider that halotherapy does work, the amount your salt lamp provides will be a fraction of this exposure. Your bedroom will also in all likelihood be larger and more open and not a controlled environment like a salt cave, making your salt exposure minimal.

Advertisements
on ionizers for asthma have also not supported the idea. Such studies have largely shown no significant improvement or change in lung function after exposing a person to ionized air compared to when they were breathing regular or control air.8

No Significant Benefit With Eczema, Psoriasis, And Other Skin Conditions

There is no proven research linking the use of HImalayan salt lamps to improvement in symptoms of skin conditions like eczema or psoriasis. But can salt help in some other way? Adding salt to bath water can help those with eczema cope with the stinging associated with a bad flare-up. The National Eczema Association suggests adding a cup of salt to bath water to soothe the skin.9 The National Psoriasis Foundation has evidence of the benefits of mineral-rich Dead Sea salts in treating psoriasis. The salt traps in moisture, which in turn softens the skin and helps break down the thickening or plaque characteristic of psoriasis.10 Could a Himalayan salt lamp have similar benefits for you? Perhaps, but most likely, no. Salt helps eczema or psoriasis patients when used topically. The amount of salt that evaporates into the air and comes in contact with you might be too small to make an effect. Moreover, evidence is lacking and there has been no significant research into the impact, if any, of such lamps on psoriasis.