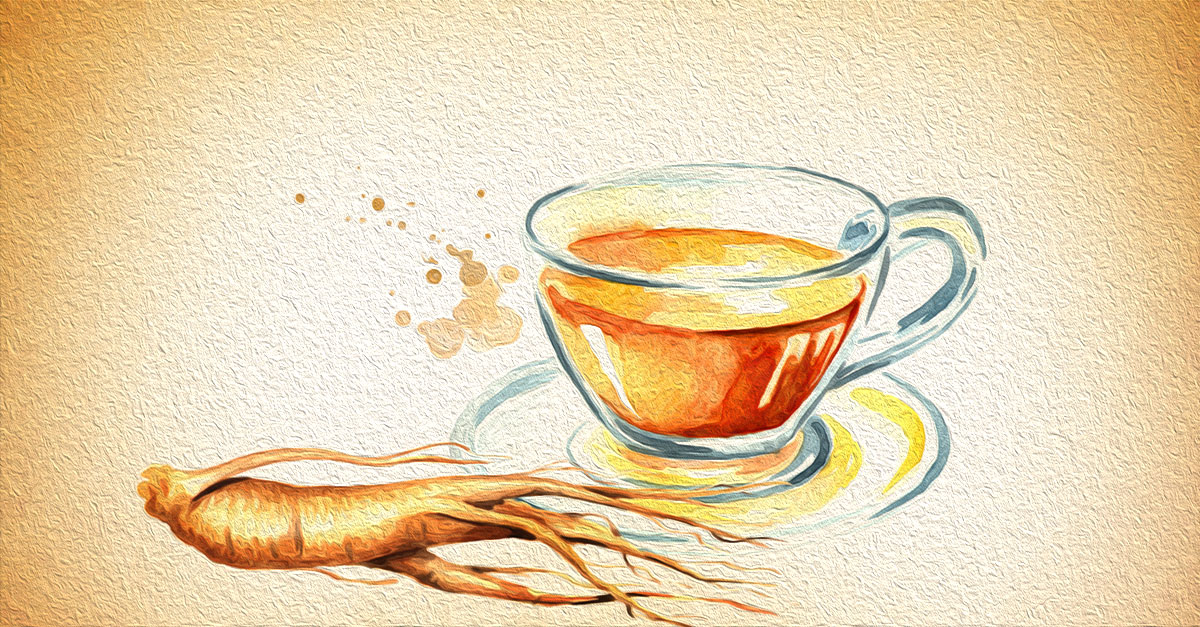 Ginseng tea may not be your go-to beverage, but with the health benefits it offers, it could well be! Ginseng, a centuries-old remedy, is called “all healing” ginseng with good reason. With its antioxidant and anti-inflammatory properties, not to mention its benefits in preventing or treating a range of health issues, this is one herb that you might want to make a regular feature in your day.1

Ginseng can be consumed in a variety of ways, as fresh or dried root or in tinctures or powdered form. A ginseng tea is yet another easy and rejuvenating way to tap the goodness of this root. What follows is a primer on the different types of ginseng and the potential health benefits ginseng has lined up for you.

Decoding The Types Of Ginseng

Siberian ginseng or Eleutherococcus senticosus is not true ginseng but may have its own benefits.2 It is an adaptogen which may help better cope with stress and has the potential to fight heart disease, kidney problems, Alzheimer’s disease, tuberculosis, and even colds and flu.3

If you’ve been faced with options of red ginseng, white ginseng, Korean ginseng, American ginseng, wild ginseng, and more, it may leave you confused about which ones really help. Here are the main types of ginseng you are likely to come across:

In the benefits you’ll now read about, you will see that most research relates to Asian or Panax ginseng (Korean/Chinese). Wherever benefits apply to American wild ginseng, it has been mentioned. So when it comes to brewing your ginseng tea, be sure you’re getting the right kind.5

If you’re feeling low on energy and fatigued in general, ginseng tea could put a spring in your step. The reviving drink taps the energy-boosting effects of ginseng. For those with chronic fatigue issues, this could be heaven-sent as one study using 1 to 2 gm daily doses of Panax ginseng (Asian, Chinese or Korean ginseng) found.6

Researchers have also found that American ginseng could help those undergoing cancer treatment who are often faced with constant tiredness and lethargy. Dosages of between 1 and 2 gm a day were suggested in the study.7

on ginseng’s use to treat neurological disorders like Alzheimer’s and Parkinson’s disease that afflict older adults have also been promising. Ginseng and its active constituents (ginsenosides) seem to impact the central nervous system on multiple fronts – from having a neuroprotective effect to aiding neural transmission and more, making it a remedy well worth exploring.17 A study that treated Alzheimer’s disease patients with Panax ginseng for 12 weeks found that it improved their cognitive performance. Researchers suggested that ginseng may not only have a positive effect but also a protective one, helping preserve and boost memory function in people with Alzheimer’s.18

Do note that reports on just how effective ginseng can be vary depending on the chemical content of extracts, the methods used to process the ginseng, how it is handled, and even when it is harvested.19 You should consult a reputed alternative medicine practitioner about which brands and what kind of ginseng is best suited to your needs.

If you’re trying to fight the damage caused by chronic inflammation, whether it’s from your diet, environmental factors, stress, or other health conditions like diabetes or obesity, a cup of ginseng tea could help your body slug it out. Studies on the ginsenosides in ginseng have also shown that they have anti-inflammatory effects which could be responsible for some of the health benefits of the root.20

The anti-obesity effects of ginseng are also being investigated. Korean red ginseng extracts helped bring a reduction in body weight, food intake, and fat content in test animals on a high-fat diet, indicating potential on this front.21

Animal studies confirm Korean red ginseng’s has anti-inflammatory properties. In this instance, it was even able to reverse some of the inflammation-linked brain damage that had occurred previously.22 American ginseng also has similar effects, with animal studies showing that it can suppress inflammation and thwart damage to DNA.23

Ginseng tea could even help you lose weight, as one animal study into its anti-diabetic effects found. Test animals saw a reduction in weight after taking Panax ginseng berry extract at a dosage of 150 mg/kg.24

Ginseng is certainly no substitute for mainstream diabetes medication. However, it could play a role as a complementary therapy as per several studies. Researchers have found that American and Panax ginseng may help combat hyperglycemia or high blood sugar, a problem those with uncontrolled diabetes constantly grapple with. It could also help prevent the death of pancreatic beta cells and boost insulin production and reduce insulin resistance, both of which are involved in issues with blood sugar control.25 26

Its benefits extend to both healthy individuals as well as those with type 2 diabetes, as one study on American ginseng found. The test saw the post-prandial (after meal) glucose levels of both kinds of test subjects stabilize when ginseng was administered.27

If you’re constantly fighting the flu or bad coughs and respiratory problems, having a cup of ginseng tea may help. American ginseng could possibly help reduce the incidence of such problems and make symptoms milder when you do develop a cold or flu.28 Korean red ginseng extract has also been seen to have antiviral effects against respiratory syncytial virus (RSV), one of the leading causes of serious respiratory infections in immunosuppressed people, the elderly, and children. Even healthy individuals could take ginseng to prevent unexpected RSV infections. It could reduce the severity of an attack if it happened as well.29

Korean ginseng might also help if you have allergic rhinitis. This upper respiratory inflammatory disease results in sneezing, congestion, and nasal itching. Animal studies confirm its ability to reduce the allergic reaction and ease symptoms, possibly due to its anti-inflammatory action.30

Animal studies show that Korean red ginseng may be able to counter the formation of ulcers, because of its ability to counter oxidative damage and improve gastric mucosal blood flow.32

Panax ginseng, specifically reg ginseng, is a remedy for hair loss problems. The saponins in it can improve hair growth, as one animal study confirmed.33 While Panax ginseng is used in shampoos and other hair formulations for topical use, even ingesting it, as you would with ginseng tea, could help. It could especially help those impacted by stress-linked hair fall because of its adaptogenic properties and ability to counter stress.

If skin care is a concern, Panax ginseng could help there too! Red Panax ginseng could be beneficial for your skin, helping with skin regeneration and hydration, and boosting circulation so your skin is well plied with nutrients. The antioxidants in it could help keep your skin looking better and less damaged by toxins. As one group of researchers found, red ginseng root extracts applied topically can help protect against photoaging of skin and increase production of collagen which keeps your skin looking supple and youthful.34 Apart from having a tea to boost skin health from within, you could also add it to your face packs.

While studies on this are not yet definitive, ginseng tea may have the potential to help with your cardiovascular health. Some research suggests that Panax ginseng may bring a very modest reduction in blood pressure and could even have help lower lipid levels, though this needs more study.36 The ginsenosides in Korean red ginseng are also being investigated for their ability to affect other areas of cardiovascular function like improving blood circulation and inhibiting the production of reactive oxygen species which play a role in heart disease.37

12. May Have Anti-Cancer Benefits

Panax ginseng has antioxidant properties that can help your body fight off aging and a host of other problems.38 American ginseng has similar benefits.39 These antioxidant benefits also translate to a promising anti-carcinogenic effect. One study of people aged over 40 found that the incidence of cancer was lower among those who took ginseng. While sipping on ginseng tea is certainly no guarantee that you’ll ward off the dreaded C, it could help.40 Researchers have also found that some ginsenosides can inhibit the growth of several cancer cell lines, including ovarian cancer, which might pave the way for more cancer research on this potential therapy.41

Have Your Ginseng Tea Safely

Making ginseng tea is actually quite easy. Simply get your hands on the fresh root or dried powder. Bring water to the boil before allowing it to cool for a couple of minutes. Then pour it over the powder or root and steep for about 5 minutes. That’s all it takes to make a healing cup of ginseng tea!

You will need to consult your doctor on accurate dosage for your needs when you are brewing it as a tea. In general, however, using up to 2 gm of powdered ginseng a day to make your herbal tea should be fine. Ginseng usage, in amounts prescribed by alternative medicine practitioners, in the short term does not usually cause a problem. It may, however, be prudent to wait for more clinical studies on the safety of long-term usage before you have therapeutic dosages for long durations.

Prolonged usage of ginseng could also affect its effectiveness. So if you decide to take ginseng tea on a daily basis, you may want to have it for 2–3 weeks and then stop for 1–2 weeks before restarting it again for 2–3 weeks. This will allow your body breaks and help keep up the benefits of taking ginseng in the long run.

Some people may experience digestive problems or have issues with their sleep as a result of taking ginseng. Headaches are another possible side effect. Do also check with your doctor for any possible interactions with any medication you may be on. This is especially vital if you have a blood pressure problem or you are diabetic, as ginseng, especially Panax, can affect both blood pressure and blood sugar levels.42

Pregnant women and nursing mothers, children and infants should avoid having ginseng tea in general as not enough is known about possible adverse effects and it could be risky.43