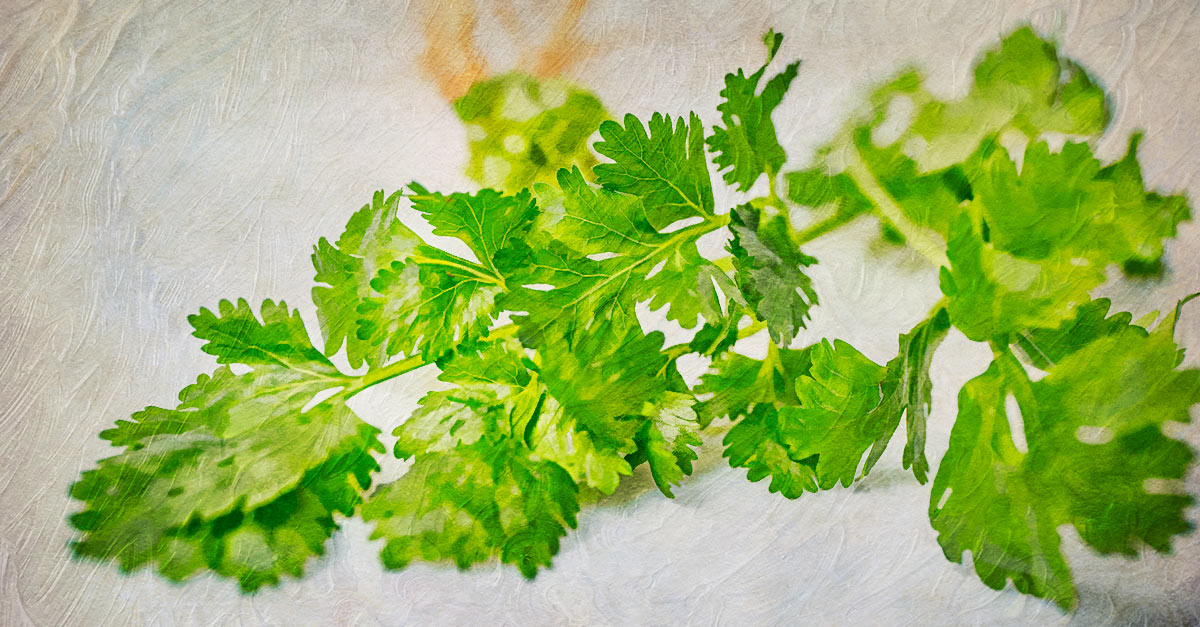 The flavorful leaves of cilantro are a welcome addition to many savory dishes across Asia and Latin America. Sprinkle it over salads, add to a salsa or a guacamole, blend into a chimichurri sauce, or use it to garnish Indian curries, you have a flavor bomb on your plate. Cilantro is the Spanish name for coriander (Coriandrum sativum L). In the USA, it refers to the leaves and stems of the coriander plant, while coriander itself refers to the dry seeds that are used whole or ground as a spice in Asian cuisine.

The use of cilantro or coriander isn’t restricted to cooking, however. Traditionally, coriander has been used to treat numerous ailments, including measles, chicken pox, urinary tract infections, and stomach disorders, and even today, coriander is a common home remedy for indigestion and flatulence. Ayurveda considers it a tridoshik herb, that is one that balances the three doshas, vata, pitta, and kapha, with special benefits for the pitta type.

Advertisements
cilantro and coriander seeds come from the same plant, they have some nutritional differences in terms of the variety and quantity of bioactive compounds – for instance, cilantro has more vitamins and polyphenolic antioxidants, while the seeds have a higher mineral and sterol content. This translates into different health benefits and degree of efficacy. Here are the health benefits of cilantro or coriander leaves.

In the course of daily metabolic processes as well as upon exposure to external toxins, our body produces reactive molecules called free radicals. These damage cells and trigger chronic inflammation. When the body’s antioxidants, which are part of the immune system, cannot cope with the damage, it leads to oxidative stress. In the long term, oxidative stress leads to premature aging as well as chronic diseases like diabetes, heart disease, and even cancer. This is where an antioxidant-rich diet plays a part in helping you recover.

Cilantro has potent antioxidants like quercetin, kaempferol, beta-carotene, beta-cryptoxanthin, and vitamin C that give it a moderately high ORAC (oxygen radical absorbance capacity) value of 5141 μ mol TE/100g.2 The ORAC value measures the antioxidative capacity of a whole food by testing how many oxygen radicals (a type of free radicals) it can mop up. While berries are known to be potent antioxidants, cilantro turns out to be even better than red raspberries in terms of the ORAC value.

Advertisements
in vitro study on human skin cells under oxidative stress found that a standardized extract of cilantro leaves could lower rates of oxidation. The leaf extract increased the levels of glutathione, a natural antioxidant in the body, and enhanced the activity of enzymes like superoxide dismutase and catalase which break down toxic byproducts into harmless chemicals. It also increased the activity of an antioxidant protein.3

Coriander seeds have been found to reduce swelling and inflammation in patients of rheumatoid arthritis, albeit at a high dose, but can cilantro?4 Possibly yes. Though cilantro has a much lower quantity of the sterols beta-sitosterol and beta-sitosterolin that give the seeds their anti-inflammatory property, it does have polyphenols like quercetin and kaempferol which are known to have anti-inflammatory benefits.5 6 This is probably why it has been used as part of an anti-inflammatory diet for patients of IBD (inflammatory bowel disorder) as well, besides the fact that it aids digestion.7

an extra sprig of cilantro to your salad or salsa and combining it with other liver-cleansing foods can certainly go a long way in keeping your body toxin-free. You may even want to try a cilantro juice or smoothie.

5. Can Protect The Heart

Several animal studies have established the beneficial effects of coriander fruit and seed extract on the heart. In one study, the seed extract prevented heart attack by scavenging free radicals, while in another the fruit extract could lower blood pressure by increasing urine output as well as by dilating blood vessels.13 14