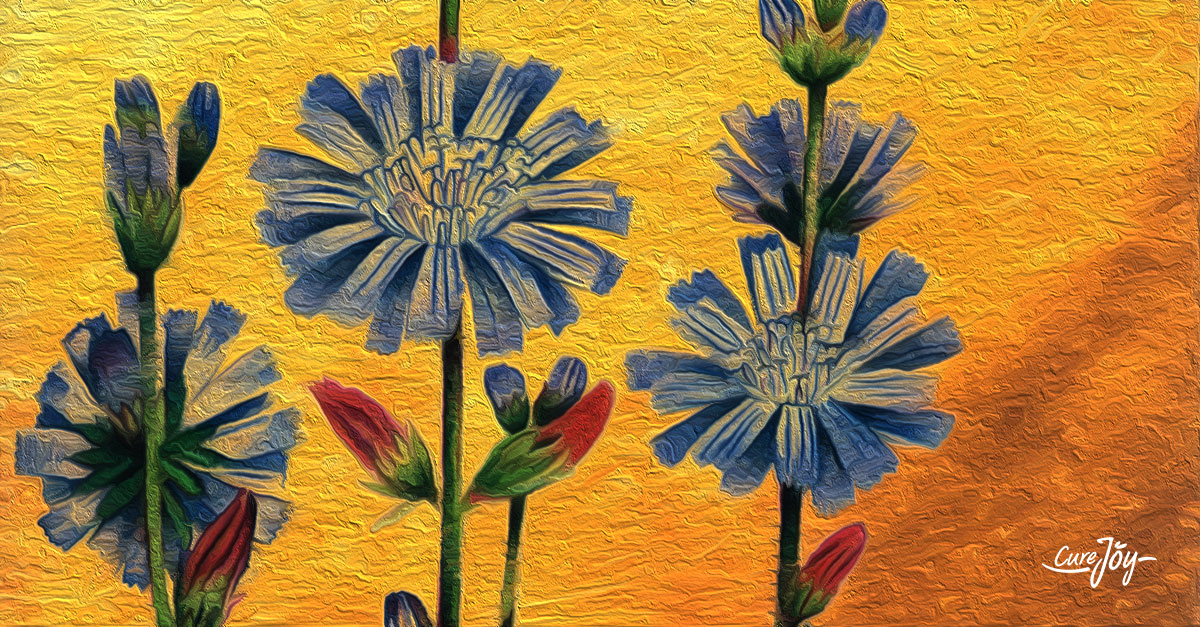 Chicory is familiar to us as a coffee additive. But there’s more to chicory than just that. It is widely believed that chicory is added to coffee for its health benefits–some believe it can nullify the toxic effects of excessive coffee drinking; some others believe that chicory has all the properties of coffee without caffeine, making it a better alternative to coffee. While these claims couldn’t be verified, we could verify that chicory, in fact, has plenty of health properties to brag about.

Let’s start at the very beginning. Chicory is a perennial herbaceous plant of the dandelion family. It is also called blue daisy or blue dandelion, thanks to the pretty bright blue flowers it has.

While almost all parts of the chicory plant are used, either as food or as medicine, it is the root that is the most popular. The roots are baked, roasted, then ground for use. The Indian filter coffee, South Africa, Southeast Asia, and the southern United States use ground chicory along with their coffee. The Great Depression of the 1930s, the World War II, the East German Coffee Crisis, all saw the rise of chicory as a coffee additive or, many a time, even a coffee substitute.

Advertisements
studies revealed that this wild plant, especially its roots, had some excellent nutritive value. Studies have also shown that plant polyphenols consumption have protective effects on cardiovascular morbidity and mortality. Caffeine-free chicory coffee is a rich source of plant phenolics.1 Chicory root is a rich source of inulin. Inulin is similar to starch and is a polysaccharide, that is gaining popularity as a functional food.2

Let’s take a more detailed look at the health benefits of chicory and decide whether we need to add it to our coffee and our regular diets.

1. It Can Kill Worms

Chicory is believed to possess properties that are toxic to internal parasites. The chicory plant, especially the root, contain certain oils that have parasite and worm-killing properties. Studies on deer also show that the condensed tannins and crude sesquiterpene lactones available in chicory effectively inactivate parasites or worms and gastrointestinal larvae.3 It is understood that tannin-rich plants, while acting as a direct antiparasitic, could also indirectly increase host resistance.4

we have seen, chicory is a rich source of polyphenols. Polyphenols have immense capability to help the body fight inflammation.10 Studies have shown that significant response to inflammation took place in people who consumed a caffeine-free chicory coffee for one week.11 This is a noteworthy development in that inflammation, as you know, is the root cause of most diseases. Lowering inflammation in the body can help keep many health problems at bay.

Various research and clinical trials have proved that chicory, due to its anti-inflammatory property, can effectively help with arthritic symptoms, especially osteoarthritis.12 Research on rats revealed that chicory can increase calcium absorption as well as increase whole-body bone mineral density.13

Advertisements
also show that chicory root extract can effectively suppress the production of certain cytokines and enzymes that are involved in inflammation. Studies in the collagen-induced murine arthritis model revealed that chicory worked by reducing joint swelling, probably as much as other medications did. Considering how debilitating this disease can be and how NSAIDs and other medications tend to have severe side effects after prolonged use, chicory, with its long history of regular consumption and good safety profile is an ideal choice to shift to.14