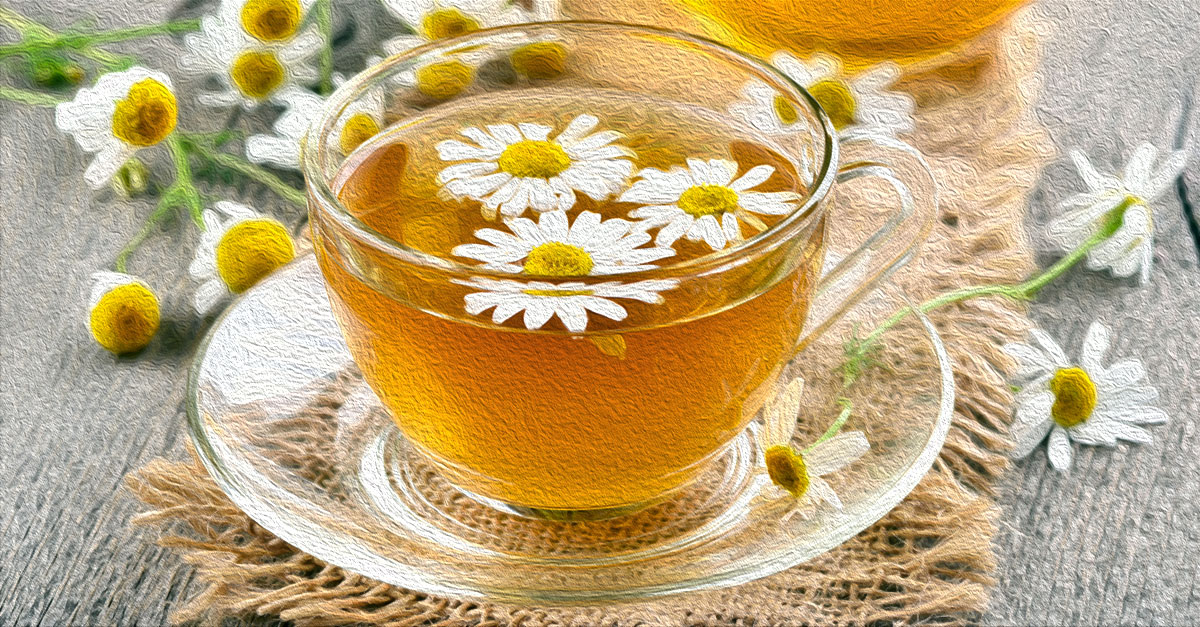 A soothing cup of chamomile tea may be your favorite way to unwind, but did you know that you are also chalking up many health benefits in the bargain? Chamomile has always been valued for its medicinal properties, with the ancient Romans, Greeks, and Egyptians using it to treat a number of diseases. And there’s every reason you should join their ranks!

Terpenoids like bisabolol, farnesene, and chamazulene and flavonoids like apigenin, quercetin, and farnesene found in the daisy-like flowers of chamomile are responsible for many of the therapeutic effects of the tea.

There are mainly two varieties of this herb – German chamomile (Matricaria recutita) and Roman chamomile (Chamaemelum nobile). While there are some variations in bioactive components, their uses are similar. German chamomile, however, is thought to be more potent and has been subjected to greater scientific scrutiny than Roman chamomile.1 It is also a sweeter variety than the stronger Roman chamomile and makes for that perfect cup of herbal tea. Here are the benefits a cuppa has got lined up for you.

potential as a sleep aid may be due to the presence of a flavonoid known as apigenin which binds to benzodiazepine receptors in the brain and exerts a sedative effect.5 So treating yourself to a cup of chamomile tea an hour or so before bedtime can help you drift off easily.

Chamomile is well known for its soothing and calming properties. Research seconds this and has found it to be beneficial for people who suffer from generalized anxiety disorder (GAD). People with this condition experience anxiety almost constantly even though there’s no obvious cause for worry. This can not only make it difficult for them to focus on everyday tasks but also result in physical symptoms such as headaches, tiredness, and muscle aches.6 According to one study, consuming an extract of German chamomile for a period of 8 weeks resulted in a significant reduction of anxiety. Flavonoids present in chamomile, especially apigenin, are considered to be responsible for this beneficial effect.7

Chamomile may help ease depression too. Depression is a condition that often occurs along with anxiety and one study observed the effect of German chamomile in people who suffered from both. People who had chamomile experienced a greater reduction in a scale that measured depression over time when compared to those who took a placebo. Although the mechanism through which chamomile works has not been definitively established, experts suggest that flavonoids present in chamomile may have an antidepressant effect by modulating dopamine, serotonin, central noradrenalin, and GABA neurotransmission.8

pylori, the bacteria usually responsible for peptic ulcers and gastritis. So try drinking this classic remedy 2 to 3 times a day between meals the next time you have a touch of indigestion or stomach pain.11 12

Chamomile tea can also help soothe pain and discomfort when your baby is teething.13 Simply massage the gums with some weak tea twice a day. Be sure to do an allergy patch test beforehand, though.

Colic is the stuff of parents’ nightmare. If your baby’s inconsolable crying and discomfort are getting to you, you might want to try chamomile tea. One study looked at the effect of giving a herbal combination of chamomile, fennel, and lemon balm extracts to colicky babies twice a day for a week. This remedy was found to reduce crying time in 85.4% of the babies. In another trial, colicky babies were given a herbal tea made primarily with chamomile for a week. The tea helped eliminate colic in 57% of cases.14 Since intestinal discomfort may, at least in part, be responsible for colic, chamomile’s tummy-soothing properties may be responsible for its benefits here.15 16

Make a weak tea with chamomile and give this to your baby when they are colicky. In the study on colicky babies, about half a cup of tea was given every time the babies experienced a bout of colic – but no more than three times a day.

Chamomile can also fight the inflammation associated with Crohn’s disease and ulcerative colitis and ease symptoms.17

Irritable bowel syndrome can mean abdominal cramping, bloating, and a change in bowel habits for many. Some people with the disorder have constipation. Some have diarrhea. Others go back and forth between the two. If IBS is making your life miserable, chamomile tea may be able to help. One study found that having chamomile extract with warm water twice a day, 15 minutes after having a meal, significantly reduced symptoms such as abdominal pain, bloating, abnormal stool consistency, and defecation difficulty after 2 weeks.18

Be sure not to go overboard with chamomile tea especially if you are on diabetic medication. To be safe, discuss options with your doctor so you can make the most of this remedy.

If you are diabetic and are concerned about keeping your blood sugar under control, chamomile may be able to help. In one study, diabetics who had chamomile tea immediately after meals thrice a day for 8 weeks saw an improvement in glycemic control. It also improved their antioxidant status, thus helping fight the oxidative stress associated with many diabetes-related complications.19 Animal studies also confirm that chamomile can help reduce blood sugar levels by inhibiting glucose absorption by the intestine.20

High blood pressure can take a toll on your health and lead to complications such as heart attack, chronic kidney disease, heart failure, and stroke. Chamomile tea may be just the ally you need to help manage your blood pressure, with animal studies showing that it can significantly lower systolic blood pressure. Chamomile has also been found to have a diuretic effect and this could possibly be why it has a positive impact on high blood pressure.21 22

The many benefits offered by chamomile may actually translate into a longer life. One study found that drinking chamomile tea was associated with a 28% lower risk of death in subjects aged 65 and over. Interestingly, the effect was more distinct among women than men! 23

Yes, chamomile can even help you fight cancer. Research has found that chamomile extracts can significantly reduce the viability of cancer cells. Apigenin in chamomile has also been found to inhibit cancer cell growth. Thanks to its the anti-inflammatory effects, chamomile can also counter chronic inflammation which plays an important role in the development of cancer.24 25 Incorporating a cup or two of chamomile tea into your daily routine might just have a protective effect.

Chamomile tea can also be used topically for skin conditions like eczema or skin infections. Compounds such as azulene, bisabolol, and farnesene in it are responsible for its anti-inflammatory properties, helping treat inflammation-related problems like eczema.26 Chamomile oil has also been found to act against candida, a fungus that can infect the skin and is known to cause yeast infections and even a diaper rash. 27 28

If your baby has a persistent diaper rash in spite of the area being dry and clean, it may be due to a yeast infection. Swabbing the affected area with a cool chamomile tea compress can help fight the candida fungus.29

Research also shows that this powerful anti-inflammatory herb can help your wounds dry and heal faster.30 Dab the area with chamomile tea to help the healing process. Using a chamomile ointment or poultice or adding chamomile to your bath water are other ways of using this herb topically.

12. Sorts Out Gingivitis And Mouth Sores

Gum disease or gingivitis can lead to swollen, red, bleeding gums. But chamomile to the rescue once again. Use your cup of chamomile tea as a mouthwash to tackle gum disease-causing plaque. According to research, a German chamomile mouthwash reduced both plaque and gingival scores significantly when used twice a day for 2 minutes. Salicylic acid from chamomile may be responsible for this beneficial effect. The soothing and healing properties of chamomile can also help with canker sores. The analgesic effect also takes care of the pain, so a gargle with chamomile tea might just be what you need to tackle those throbbing mouth sores.31 32

To prepare chamomile tea, simply steep 2 or 3 teaspoons of dried chamomile for around 10 to 15 minutes in a cup of boiling water.33 You can use the same quantity of fresh flowers if you have them handy.

Chamomile tea can be had safely 3 to 4 times a day between meals, but no more. However, do keep in mind it can cause an allergic reaction in some, particularly those who are sensitive to daisies, marigold, and ragweed. Avoid the tea if you belong in this category. It may also interact with some medicines such as certain blood thinners. So do speak to your doctor before using chamomile if you are on any medication. Not enough data is available on chamomile’s effects on a pregnancy though many herbalists recommend it for insomnia, restlessness, and heartburn during pregnancy. Discuss your options with your doctor and play it safe by limiting intake if you do choose to have the tea during your pregnancy.34 35