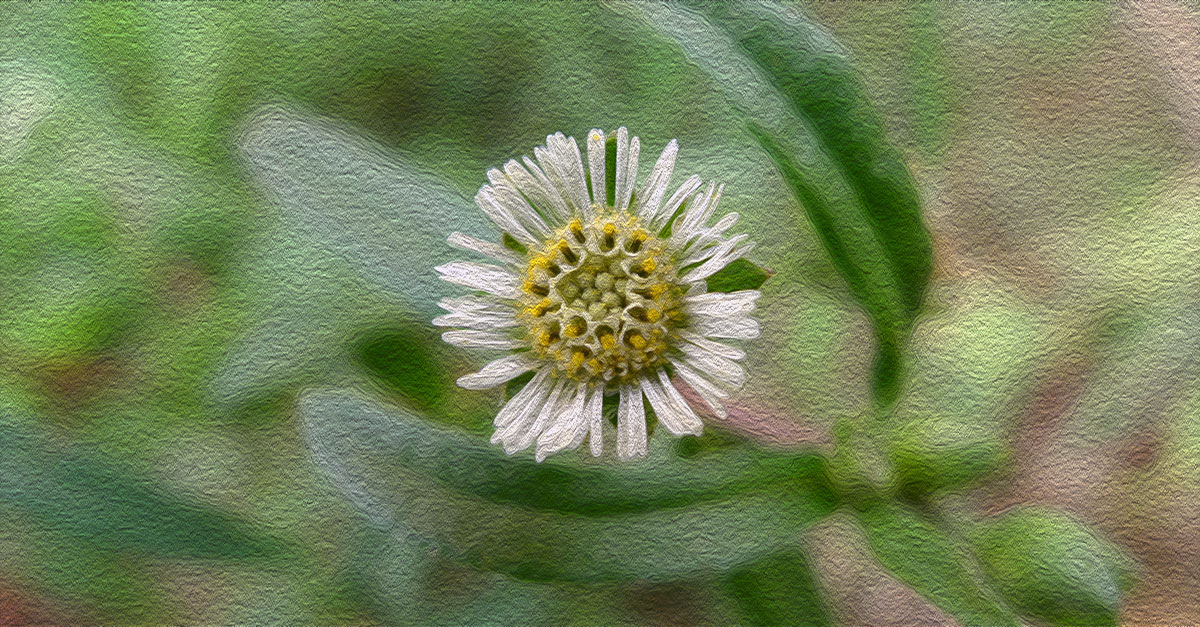 Bhringraj comes in about 4 species with different colored flowers. The white and yellow variety find extensive use in ayurveda. Bioactive components such as oroboside, wedelolactone, demethyl-wedelolactone, eclalbasaponins, β-sitosterol, α-amyrin, oleanolic acid, ursolic acid, apigenin, and luteolin present in bhringraj are thought to account for many of its beneficial effects.1

Scan any ayurvedic hair oil or tonic and bhringraj will feature prominently in it. But this medicinal plant’s benefits go beyond that for your tresses, earning it a valued place in traditional medicinal systems such as ayurveda, siddha, and unani. From respiratory disorders to skin problems, there’s a whole lot that bhringraj, Eclipta prostrata, or Eclipta alba, can address. Here’s a closer look at the health benefits of bhringaraj:

Traditionally, bhringraj leaves are ground into a paste and applied to the scalp and hair to promote hair growth and reduce graying. A bhringraj hair oil can also be massaged into the hair before you wash your hair or left in overnight. A leaf extract may be taken orally to aid hair growth from within.

Advertisements
most popular one first! Bhringraj, literally meaning “king of hair,” is widely known to be a hair-vitalizing herb and has traditionally been used to tackle hair loss and premature graying. Its hair power comes with scientific backing too. One animal study found that an extract of bhringraj helped regenerate new hair in half the time taken by a medicine used for hair growth. It was also observed that hair grew faster and that more hair follicles were in the anagen or hair growing phase of the hair cycle, as opposed to the telogen or hair shedding phase, when this herb was used. β-sitosterol, a chemical compound present in bhringraj, is thought to be responsible for its ability to improve hair growth.2

From a migraine to a toothache to stomach or muscular pain, bhringraj can come in handy for a variety of everyday aches and pains.

Advertisements
fresh leaf extract of bhringraj is a go-to remedy to ease pain in many Indian communities. Ayurvedic medicine also uses bhringraj for fighting pain, inflammation, and swelling.3 This is seconded by animal studies – in one study, subjects exposed to heat and chemicals experienced relief from pain when bhringraj was used.4 So if you’re looking for a non-narcotic analgesic, bhringraj fits the bill.5

A paste of bhringraj powder can be applied to the skin to improve and brighten your complexion.

Advertisements
has also traditionally been used to treat skin diseases. Studies show that it works against fungi which cause skin infections such as athlete’s foot and ringworm.6 7 A paste of the leaf of this herb is typically applied to treat these conditions. Traditional medicinal practices also use the leaf paste to tackle boils and the plant paste to deal with eczema.

The leaf extract of bhringraj is usually used to tackle asthma while bronchitis is treated with a decoction of the whole plant along with honey.

Bhringraj is commonly used for treating respiratory tract disorders such as asthma and bronchitis. The common factor underlying these conditions is the inflammation of airways which carry air to or from your lungs, resulting in symptoms like shortness of breath and wheezing.8 9 But bhringraj may be able to ease these problems as it has anti-inflammatory properties. In fact, one animal study found that injecting or nasally administering an extract of bhringraj brought relief. This was thanks to components such as oroboside, wedelolactone, and demethyl-wedelolactone which helped tackle asthma caused by exposure to allergens.10

This rejuvenating herb is bitter in taste but cooling in action and can help balance pitta dosha. It can be used as an infusion or decoction or as part of a medicated oil or medicated ghee.11

Advertisements
vomiting, stomach cramps, and fever – dysentery can leave you feeling really miserable. Bhringraj to the rescue again! How does it work? Research shows that this herb fights the Shigella dysenteriae bacteria that can cause bacillary dysentery.12 13 A decoction of the whole plant may be given orally to treat this condition. Alternatively, some healers also advise you to take the juice of bhringraj leaves along with honey to treat dysentery.

High blood pressure and high cholesterol levels are two important cardiovascular risk factors. But bhringraj can step in here and help. One study looked at the effect of dried bhringraj leaves on men with mild hypertension. Participants had 1000 mg of bhringraj leaf powder thrice a day for 60 days. It was found that this resulted in a 15% reduction in blood pressure and 17% reduction in cholesterol levels. The level of triglycerides, also a risk factor for heart disease, reduced by 14%.14 Bhringraj leaves are often used along with honey to treat conditions such as heart palpitations.

Traditionally, bhringraj is used to treat conditions such as jaundice and liver enlargement. The leaf juice or plant extract may be administered either alone or along with other components such as honey, pepper, or punarnava for liver disorders.

Your liver works hard to remove toxins from your body. And bhringraj has the ability to protect this important organ from damage by harmful chemicals. One animal study found that treating subjects with bhringraj before administering the toxic chemical carbon tetrachloride meant that the mortality rate due to liver damage was reduced to 22.2% from the 77.7% observed in untreated animals.17 Components such as demethyl-wedelolactone and wedelolactone are thought to account for these beneficial effects as they show not only antihepatotoxic activity but are also able to help regenerate liver cells.18

A stomach ulcer can leave you with a gnawing, burning pain, heartburn, and nausea. But bhringraj may be able to help out here as well. Stomach ulcers are often a problem for people who take non-steroidal anti-inflammatory drugs (NSAIDs) like aspirin for long periods or in high doses. But an animal study found that administering a bhringraj extract prior to inducing ulcers with aspirin significantly reduced gastric inflammation as well as the development of gastric ulcers. This effect was also observed when stomach ulcers were induced using alcohol.19 20

Diabetes can lead to various complications such as kidney disease, heart disease, eye problems, and nerve damage. And alarmingly, around 30.3 million Americans suffer from this condition.21 Bhringraj has a good reputation for lowering blood sugar. And this is borne out by animal studies which show that administering the leaves can reduce blood glucose significantly. Bhringraj is thought to work by stimulating the secretion of insulin.22 In traditional medicine, leaves of the herb are boiled in an earthen vessel along with leaves of other beneficial plants such as licorice weed and Bermuda grass. This solution is then strained and used to balance sugar levels.

A quarter of a teaspoon of bhringraj powder mixed with a tablespoon of aloe vera gel and a pinch of black pepper can be taken every day to improve memory and brain power. Bhringraj can also be combined with brahmi, jatamansi, and shankha pushpi (1 teaspoon each) and steeped in a cup of hot water for 10 minutes for a memory-boosting tea that can also help ease stress.23

Forgetting where you left your wallet or keys can be inconvenient and sometimes even frightening. But if you feel that your memory’s getting a little dodgy, bhringraj can help. In one study, mice were placed in the center of an open rectangular chamber. The mice stood up on their hind legs to explore their new environment. When they were returned to the same environment again and again, the time spent rearing decreased as they remembered details of the environment from their previous visit and the need for exploration was reduced. It was observed that mice given an extract of bhringraj spent less time rearing up on subsequent visits because their memory was better. The free radical-scavenging activity of bhringraj may account for this effect by protecting brain tissues from degeneration.24

Our bodies are exposed to harmful germs from the environment continuously. Fortunately, the immune system fends off these invaders before they can cause an infection. And bhringraj may be able to give your immune system a hand and help fortify it. Studies have found that extracts of this plant can increase white blood cell count and antibody production – both of which help your body fight off germs.25

Bhringraj has also been used to treat snake bites and scorpion stings in many traditional cultures. And research indicates that it can actually inhibit venom, specifically that of the South American rattlesnake (Crotalus durissus terrificus). Folk healers usually administer juice or decoction of the whole plant for treating a snake or scorpion bite. But if you are bitten by a poisonous snake, seek immediate medical attention first.26 You can still use bhringraj to soothe the inflammation or discomfort from other, less dangerous insect bites.