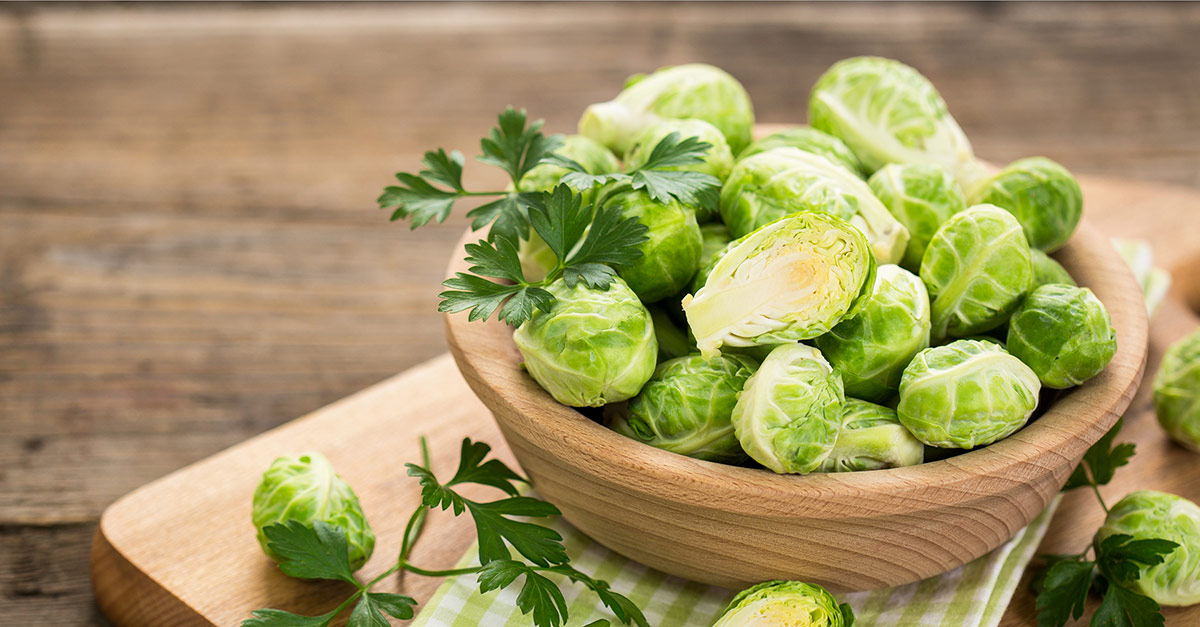 Whether you’re someone who tends to stare at your plate of Brussels sprouts wishing for a steak instead or someone who loves their vegetables, there’s no denying that Brussels sprouts are loaded with nutrition. And if you’ve got any doubts about stocking up on them for your next meal, we’ve got a list of health benefits that will convince you to.

Chomping down half a cup of Brussels sprouts will give you 2 grams of fiber and make up for 8% of your daily fiber needs.1 And keeping up with your fiber needs can feed the beneficial bacteria in your gut and keep your digestive health in good shape. It also relieves you of constipation by increasing stool frequency and softening its consistency to ease passage. Besides, this increased fiber intake has been associated with other health benefits too, such as a reduced risk of heart disease and improved blood sugar levels.2 3 4

Brussels sprouts are also a good source of vitamin K with half a cup of this veggie providing you with 137% of daily requirements.5 This vitamin plays an important role in bone growth and, as such, protects against osteoporosis which is a condition characterized by progressive bone loss. In fact, a review of seven studies found that vitamin K could increase bone strength and decrease the risk of bone fracture in postmenopausal women.

As we’d mentioned earlier, fiber intake is linked to better blood sugar control. Studies have linked an increased intake of cruciferous vegetables, including Brussels sprouts, to a decreased risk of diabetes. This could be attributed to its fiber content which slows down the absorption of sugar into the blood and prevents blood sugar spikes. In addition to this, Brussels sprouts also contain alpha-lipoic acid, which is an antioxidant that’s been linked across studies to better blood sugar levels and increased insulin, a hormone that’s responsible for transporting sugar from the blood to the cells,  sensitivity. In one study, for instance, 12 patients with diabetes who were given alpha-lipoic acid supplements experienced increased insulin sensitivity possibly because the alpha-lipoic acid allowed insulin to work more efficiently at lowering blood sugar.6 7 8 9

A half-cup serving of Brussels sprouts provides you with 81% of your daily vitamin C needs.10 This vitamin acts as an antioxidant and is linked to better immune function. One study found that consuming enough vitamin C reduced the severity of a cold and decreased its duration by an average of 8% in adults. So if you tend to fall sick often, load up on some Brussels sprouts.11

Vitamin C and skin health is a relationship that’s spoken of quite often in the world of health and wellness. Consuming enough vitamin C may prevent skin dryness and damage caused by the sun’s UVA and UVB rays. In addition to this, vitamin C is responsible for collagen function, so maintaining healthy levels of the nutrient in the body can prevent wrinkles, dark spots, and dull complexion.12

6. May Aid In The Treatment Of Iron-Deficiency Anemia

If you suffer from iron-deficiency anemia, consuming Brussels sprouts may help fight it and lower its symptoms. This is because the vitamin C in Brussels sprouts increases the absorption of non-heme iron, a type of iron that is found in plant foods. Since this type of iron is often difficult to absorb as opposed to animal sources, Brussels sprouts are an important addition to any vegan or vegetarian who suffers from iron-deficiency anemia. One study found that consuming vitamin C with a meal increased the absorption of iron by as much as 67%.13

7.
Advertisements
May Reduce The Risk Of Inflammation-Related Disorders

Inflammation is an immune response that is normal but, when chronic, can contribute to diseases like cancer, diabetes, and heart disease. Studies have found that compounds found in cruciferous vegetables, like Brussels sprouts, contain anti-inflammatory properties.14 15 In addition to this, Brussels sprouts are high in antioxidants, especially kaempferol, which neutralize free radical damage that often leads to inflammation. Consuming this vegetable regularly may stave off disorders related to inflammation.16 17 18

Brussel sprouts pack in omega-3 fatty acids, with 135 mg of ALA (which later converts to EPA and DHA) per half-cup serving, which meets 12% of your daily needs.19 Omega 3 fatty acids have been shown to slow cognitive decline. Other studies have found that EPA and DHA prevent the occurrence of psychosis in children and improve their learning ability along with their attention span.20

The antioxidants in Brussels sprouts that we’d mentioned earlier, could help protect against certain types of cancer. One study that looked into this found that consuming Brussels sprouts could protect against carcinogens (cancer-causing agents) which prevent oxidative damage to cells, while another found that eating these cruciferous vegetables increased the levels of some detoxification enzymes in the body by 15–30%, which could lead to a decreased risk of colorectal cancer. However, further research is required to fully understand and back this up.21 22 23