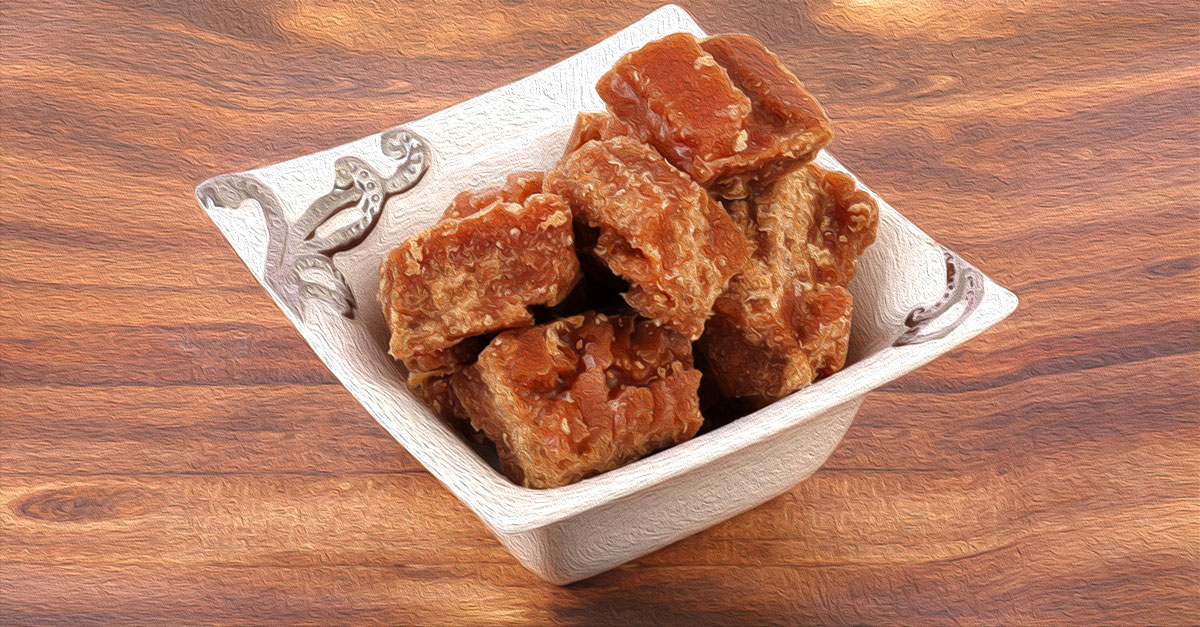 Jaggery may be the poster child of sweeteners thanks to its possible health benefits and nutrient content. After all, it is a great source of energy and could rev up your metabolism and increase iron intake.[ref]Sahu, Anand P., and Ashok K. Saxena. “Enhanced translocation of particles from lungs by jaggery.” Environmental health perspectives 102, no. Suppl 5 (1994): 211.[/ref] [ref]Shrivastav, Priyanka, Abhay Kumar Verma, Ramanpreet Walia, Rehana Parveen, and Arun Kumar Singh. “EUROPEAN JOURNAL OF PHARMACEUTICAL AND MEDICAL RESEARCH.”[/ref] Ayurveda also uses jaggery, guda, or gur to help treat a range of conditions, from migraines to anxiety and fatigue.[ref][ref]KUMBHAR, YOGESH SHANKAR. “STUDY ON GUR (JAGGERY) INDUSTRY IN KOLHAPUR.” (2016).[/ref] But as with any remedy, jaggery is not without its shortcomings. Depending on your medical history and health, as well as the purity of the jaggery itself, consuming this sugary ingredient may present some possible problems. Here’s a closer look at what to watch out for!

1. May Cause Weight Gain

Ringing in 38.3 calories with every 10 gm, jaggery is no diet food![ref]Jaggery (Indian raw sugar).

Advertisements
Self Nutrition Data.[/ref] If you binge on jaggery and use it liberally in your beverages, meals, or desserts and snacks, you will rack up the calories and sugar, both of which can see you piling on the extra pounds. This is, after all, a food that’s largely just carbohydrates and that too mostly sugar. And while it has some nutrients, there are healthier and lower calorie ways to get those nutrients from your diet, be it through fresh vegetables, fruits, or whole grains.

2. Has To Be Avoided If You Are Prone To Inflammation Or Swelling

According to ayurveda, gur or jaggery is best avoided for conditions of shotha – that is edema or swelling. Being a sugary food, it could worsen the swelling and any fluid retention you face. Which is why when it comes to amavata or the swelling of joints, jaggery winds up on a list of things to be avoided.[ref]Amavata. National Health Portal of India.[/ref]

Sugary foods in general and refined sugar in particular are known to be linked to inflammation in the body. And while jaggery isn’t refined, it is still largely made up of sucrose, so if you have inflammatory conditions, including problems like rheumatoid arthritis, you might need to watch your intake.[ref]Giugliano, Dario, Antonio Ceriello, and Katherine Esposito. “The effects of diet on inflammation.” Journal of the American College of Cardiology 48, no. 4 (2006): 677-685.[/ref] Animal studies have also found that sucrose could interfere with the work of anti-inflammatory omega-3 fatty acids, compounding your inflammation.[ref]Ma, Tao, Bjørn Liaset, Qin Hao, Rasmus Koefoed Petersen, Even Fjære, Ha Thi Ngo, Haldis Haukås Lillefosse et al. “Sucrose counteracts the anti-inflammatory effect of fish oil in adipose tissue and increases obesity development in mice.” PloS one 6, no. 6 (2011): e21647.[/ref]

If the jaggery itself is impure or not prepared properly, you also run the risk of contracting intestinal worms or parasites from eating it.[ref]Living Easy with Ayurveda.

Advertisements
Partridge Publishing.[/ref] As one study found, the relatively unhygienic conditions under which a lot of jaggery is prepared traditionally can mean that it is laden with microbes, many of which may even be resistant to different antibiotics and may adversely affect your health.[ref]Singh, Shubhra, Ashutosh Dubey, Lakshmi Tiwari, and A. K. Verma. “Microbial profile of stored jaggery: A traditional Indian sweetener.” Sugar Tech 11, no. 2 (2009): 213-216.[/ref] Ironically, jaggery is actually a part of anti-intestinal ayurvedic medication “manibhadra guda” where its role is to attract the worms to the intestines so the herbs in the medication can act against them.

5. Is Not Recommended For Those With Ulcerative Colitis

While jaggery is often seen as a better alternative to any other sweetener, it actually makes it to the list of foods you should avoid if you have ulcerative colitis. Sugars in general seem to worsen the problem, allowing undesirable intestinal microbes to flourish.[ref]Gotschall, E. “Digestion-gut-autism connection: the specific carbohydrate diet.” Medical Veritas 1, no. 2 (2004): 261-71.[/ref]

Advertisements
piece of research on the connection between this digestive health problem and autism found that the Specific Carbohydrate Diet, designed to help correct digestive imbalance, may also help with issues of the brain, including seizures. According to this diet, you should avoid jaggery. Other foods to be avoided completely on this diet include processed foods, grains, starchy vegetables, canned vegetables, milk products (except for specially made fermented yogurt), flour, and sugar.[ref]Gotschall, E. “Digestion-gut-autism connection: the specific carbohydrate diet.” Medical Veritas 1, no. 2 (2004): 261-71.[/ref]

6. May Cause Indigestion Or Constipation When Freshly Made

Freshly made jaggery is believed to be a kapha-inducing food according to ayurveda. As a result, it can cause indigestion. Some people report experiencing constipation from jaggery intake as well.[ref]Sekar, S., and S. Mariappan. “Traditionally fermented biomedicines, arishtas and asavas from Ayurveda.” (2008).[/ref] Old jaggery is at least a year old. Jaggery older than 3 years, referred to as prapuranaguda, is generally used in ayurvedic remedies.[ref]Deshmukh, Ashwini, Meenakshi Amrutkar, and Shardul Chavan. “MODERN AND AYURVEDIC ASPECTS OF GUDA WITH SPECIAL REFERENCE TO JAGGERY.”[/ref]

7. Can Cause Illness If Older Than 4 Years

Advertisements
here’s where it can get confusing. While absolutely freshly made jaggery isn’t good if are prone to digestion issues, use any that’s too old and it could be just as bad – or worse. Guda that’s been stored for 4 or more years loses not just its flavor but also puts you at risk of contracting parasites like worms (krimi), respiratory issues (svasa), or cough(kasa).[ref]Deshmukh, Ashwini, Meenakshi Amrutkar, and Shardul Chavan. “MODERN AND AYURVEDIC ASPECTS OF GUDA WITH SPECIAL REFERENCE TO JAGGERY.”[/ref] So be sure to read the labels carefully and ensure you are buying jaggery made well within this mark.

8. Poses Risk Of Allergy For Some

There is also the chance that jaggery could be a food you are allergic to. If this is the case, it is off the cards for you and may be better substituted by another natural sweetener like cane sugar.[ref]A Guide to Allergies By Dr.Ramdas, Anuradha S.K. Lotus Press.[/ref] If you do have an allergy to jaggery, these are some of the side effects you might experience:[ref]Allergy Symptoms.

Interestingly, if you aren’t allergic to it, jaggery is actually a great anti-allergy remedy. An ayurvedic remedy uses jaggery along with 4 to 5 teaspoons of turmeric cooked in a spoon of butter to counter asthmatic attacks.[ref]Svasa Roga (Asthma). Ayurveda Institute UK.[/ref]

Even if you don’t have an allergy to it or any medical history that might prevent you from having jaggery regularly, you should be mindful of one issue that could impact anyone. One of the major disadvantages users of jaggery or gur will face is one of consistency and purity. Unlike any food which is produced by automated plants to fixed standards, because of how jaggery is often made, the quality, color, and nutrient content can vary a fair bit. When automated, the taste and color are more uniform. Unfortunately, this is only done for sugarcane jaggery but not the other kind of jaggery – palm or palmyra jaggery.[ref]Deshmukh, Ashwini, Meenakshi Amrutkar, and Shardul Chavan. “MODERN AND AYURVEDIC ASPECTS OF GUDA WITH SPECIAL REFERENCE TO JAGGERY.”[/ref]

The adulteration of jaggery may involve the addition of chemicals that have adverse effects on your health. Here are some common adulterants for the different types of jaggery available in the market:[ref]Deshmukh, Ashwini, Meenakshi Amrutkar, and Shardul Chavan. “MODERN AND AYURVEDIC ASPECTS OF GUDA WITH SPECIAL REFERENCE TO JAGGERY.”[/ref]

But, luckily, with a little care like picking a product from a reputed manufacturer, you can sidestep this issue.

So the verdict? If you don’t have any health conditions that call for avoiding sugary foods or jaggery, this natural sweetener can be part of a wholesome balanced diet and may even help overcome other health problems when used in ayurvedic or herbal remedies. Pick up the product from a reliable manufacturer and be sure not to consume it in excess and you are free to enjoy your gur!