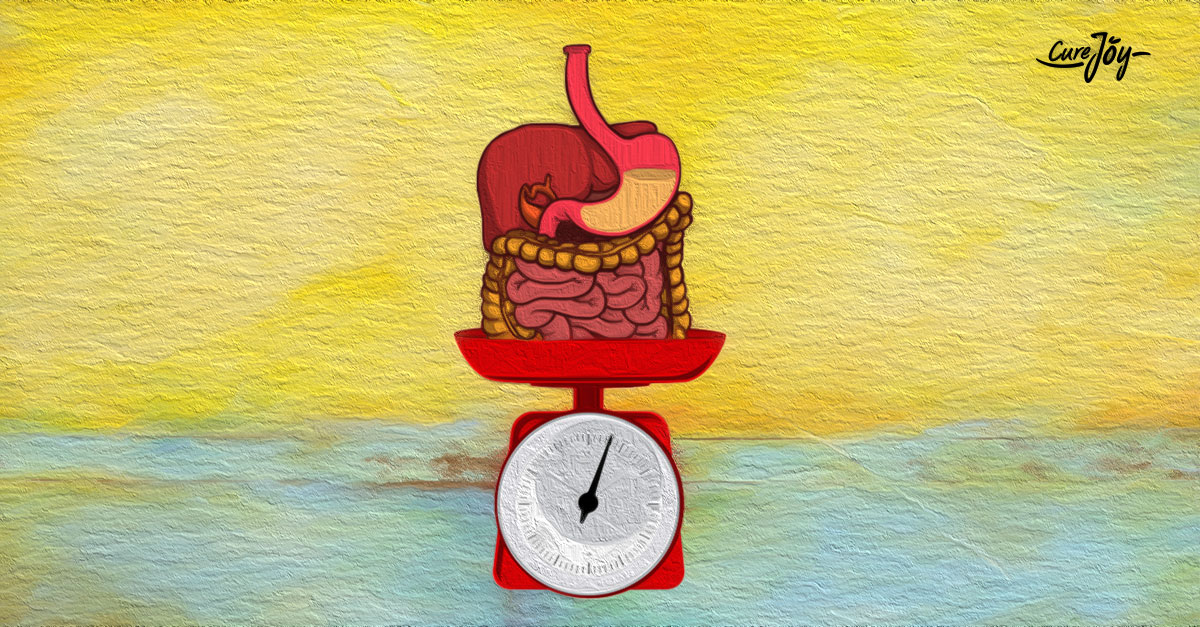 There is a good chance that during the holiday season you put on a few pounds thanks to the extravagant dinners, one too many drinks, and abundant sweets. But what if you find that you are putting on weight even when your diet is normal? Sounds like a nightmare right? In some cases, a problem in your digestion could result in weight gain.

Any of these common digestive issues could be the reason behind your mysterious weight gain. 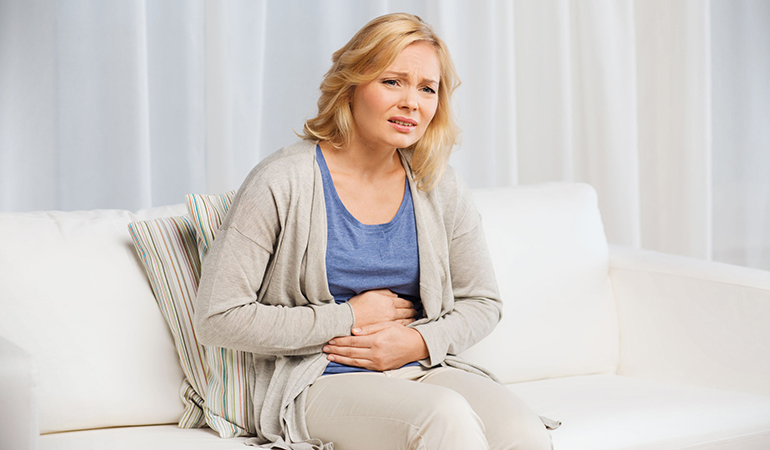 Stomach ulcers or gastric ulcers are open sores that appear on the lining of the stomach. If the ulcer is found just beyond the stomach, on the intestines, it is known as duodenal ulcers. Stomach ulcers may often result in a burning sensation in the center of the abdomen.

Too much acid production is the reason for developing stomach ulcers. When the layer that protects the stomach lining from stomach acid breaks down, the stomach lining gets damaged. An infection with Helicobacter pylori (H. pylori) bacteria or taking certain medications for a long period, at high doses may be the reason behind an ulcer.1 In order to ease the discomfort, you may resort to eating more which can cause you to gain weight.

The treatment depends on what caused the ulcer. Doctors may recommend a medicine to reduce the amount of acid the stomach produces (anti-acid) or an antibiotic to kill the bacteria. Most stomach ulcers disappear with treatment in a month or two. If the underlying cause is addressed properly, the ulcer usually doesn’t come back. 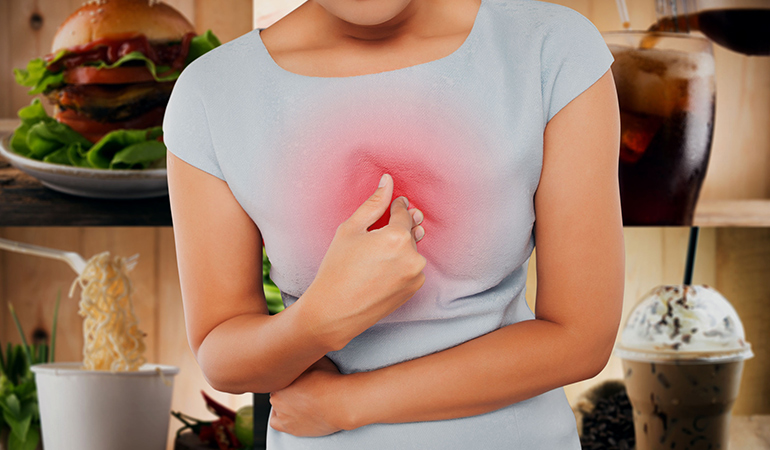 Acid Reflux Disease or gastroesophageal reflux disease (GERD) is a common condition that may cause a burning sensation in the lower chest due to the stomach acid rising into the esophagus.2 Those suffering from this condition often feel better when there is food in their stomach to soak up excess acid, which is why they may end up gaining weight.

Those who suffer from GERD often manage the pain temporarily by eating food because the saliva and the food cancel the acid. However, once the food is digested, the symptoms will return, often more aggressive than before.

Here are few things you can try at home to fix GERD:

If that doesn’t do the trick, your doctor would prescribe suitable medication. In extreme cases, where the symptoms are not reducing even after medication, your doctor may suggest a surgery to stop stomach acid leaking into your esophagus. 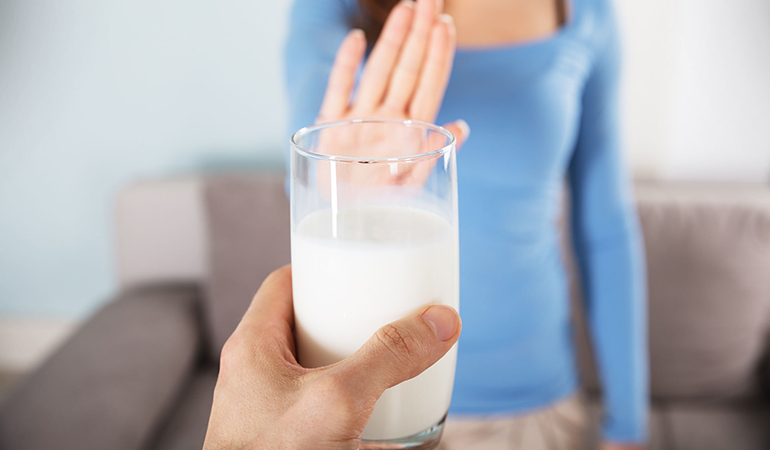 Advertisements
tolerance is different from a food allergy because food allergy is a response from the immune system while a food tolerance is caused by the digestive system. If your body is easily irritated by certain foods, such as dairy, food intolerance may be the reason. Eating food that does not suit you creates inflammation in the body, which creates an environment that is just right for weight gain and chronic disease. 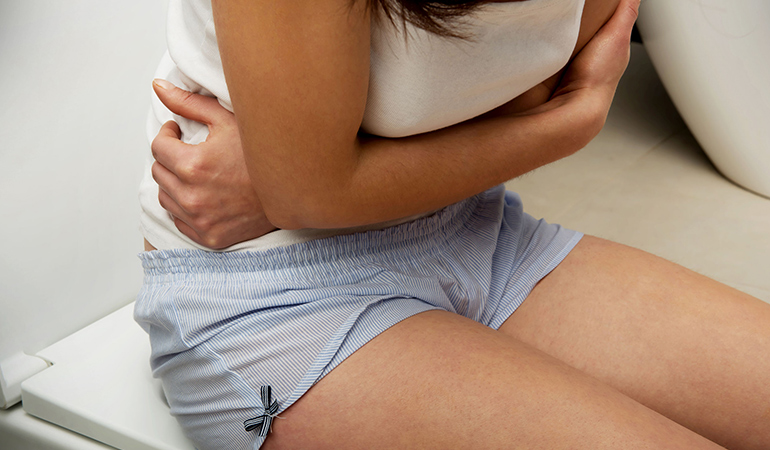 Another common, uncomfortable condition is constipation. This can give you a feeling of being weighed-down, similar to the feeling of gaining weight. However, just because you are backed up, it doesn’t mean that you are actually gaining weight. The extra pounds could just be the extra fecal matter in your system. As soon as you get rid of the constipation, you should feel lighter.3

It’s difficult to pinpoint why you are constipated. These factors, however, could contribute to your constipated state: 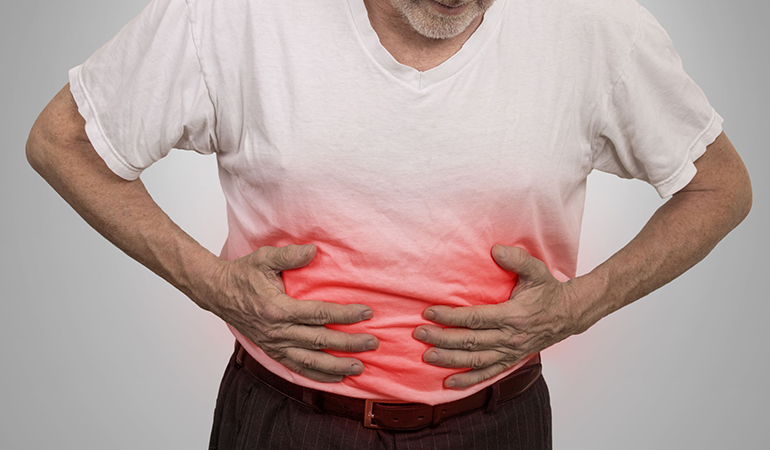 Irritable bowel syndrome (IBS) is a long-term condition that can cause bloating, stomach cramps, diarrhea and/or constipation. The severity of the symptoms may vary, and the symptoms may last anywhere from a few days to a few months at a time. It tends to occur more frequently if you are stressed or if you eat certain foods.4

IBS affects much more women than men. Up to one in five people experience IBS and it usually first occurs when a person is between the ages of 20 and 39. Usually, the condition lasts a lifetime, although it may improve over the years. The weight that those who have IBS tend to put on is usually water weight. If you avoid certain food that triggers a bout of IBS, you could avoid the bloat, and thus the water weight associated with IBS. 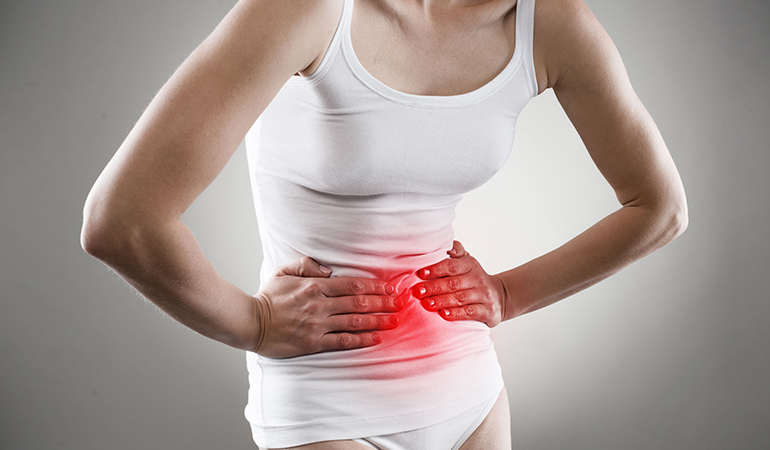 Did you know there are two kinds of bacteria in your bowel? There is the good kind and the bad kind in there. The good bacteria play a crucial role in your overall health by keeping your weight in check and by reducing inflammation. When there is an imbalance in the good and bad bacteria, small intestinal bacterial overgrowth (SIBO) can occur which can cause weight gain.

As a result of SIBO, the bacteria could produce methane gas, which would slow down the small intestine’s functioning and make it absorb more calories per bite. SIBO can also slow down metabolism, affecting leptin and insulin resistance, which helps regulates hunger and satiety. That means that even after having a regular meal, you won’t feel full and you will crave carbs.

Antibiotics kill off bacteria, so unless it is absolutely necessary, avoid it. If, however, you already have a case of bacteria overgrowth, your doctor may prescribe a digestive herbal supplement so that your bacteria balance is returned.

Having an unhealthy diet and lifestyle can not only cause weight gain but also digestive issues like IBS and constipation. These digestive issues are not only painful and uncomfortable but if left untreated could lead to serious complications.