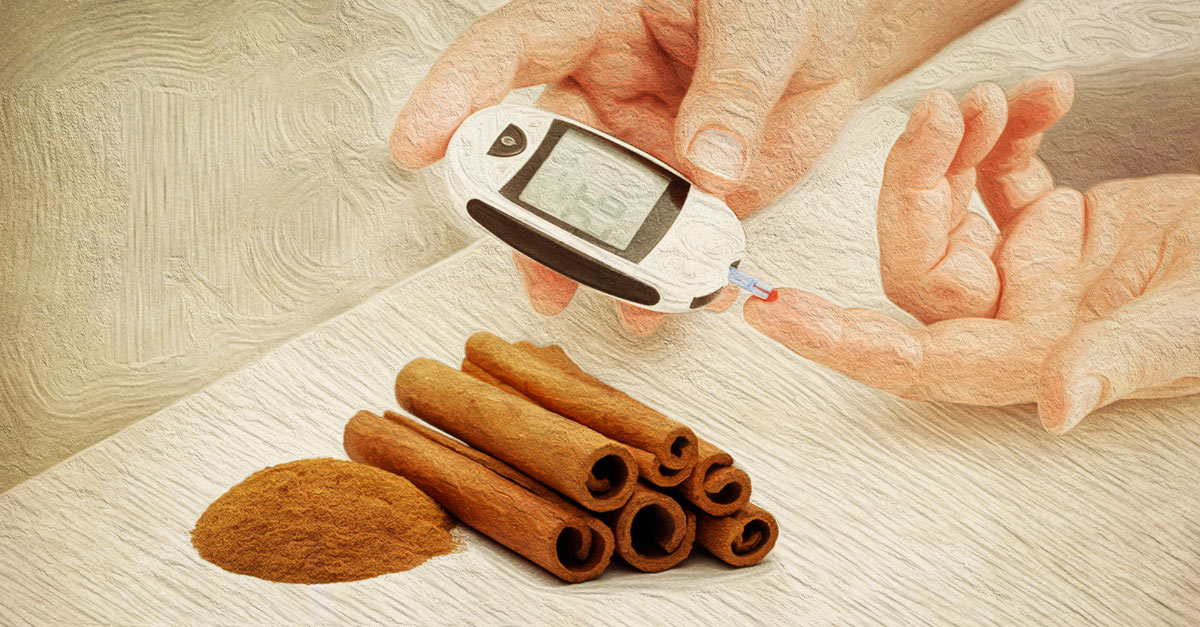 Known for its cozy fragrance that’s a mix of sweet and spicy-hot all at once, cinnamon is a spice-rack staple. But warm and spicy cinnamon can hold the promise of much more than holiday baking – especially if you are diabetic. Known for its strong anti-inflammatory, antimicrobial, and antioxidant properties, cinnamon (both Ceylon and cassia varieties) is increasingly being explored as an alternative remedy for diabetes. Here’s how the research stacks up in cinnamon’s favor.

Although research on the effects of cinnamon on blood sugar is not yet definitive, what has emerged is promising. As a meta-analysis that looked at 8 previous studies showed, cinnamon showed potential in lowering blood sugar in diabetics. When subjects were given either whole cinnamon or a cinnamon extract, it resulted in a significant reduction in fasting blood sugar levels, prompting the researchers to say that cinnamon could be a useful alternative therapy for people with type 2 diabetes or prediabetes.1 The type of cinnamon was not specified in this case.

Advertisements
what also needs to be noted is that only 4 of the 11 studies achieved reductions in line with the American Diabetes Association’s diabetes treatment goals. There have also been other studies where the results have not been so clear-cut.

When you have type 2 diabetes, the body’s response to the insulin hormone is compromised. This results in abnormal metabolism of carbohydrates and elevated levels of glucose in the blood. Animal and lab studies have shown that cinnamon can effectively mimic insulin and even make the insulin in the body more efficient. This, in turn, improves insulin sensitivity in the body, helps body cells respond better to insulin, and facilitates smoother glucose transport. Thus cinnamon has potential as an alternative remedy not only for diabetics but also for people with pre-diabetes or who show initial signs of insulin resistance.4 5 Human studies confirm this – as one small study found, during two 14-day interventions, when subjects were given 3 gm of cinnamon per day, they saw an improvement in insulin sensitivity and glycemic control.6

Advertisements
Advertisements
like chromium and polyphenols in cinnamon are thought to be responsible for this effect.7 A chemical compound called methylhydroxychalcone polymer (MHCP) in cinnamon is especially thought to be responsible for its insulin-mimicking activity. Studies show that MHCP has the same biological activity as insulin itself. It increases the uptake of blood sugar by cells and stimulates the synthesis of glycogen.8

You may not realize it when you’re enjoying a big meal, but your blood sugar levels tend to spike significantly after you’ve eaten, especially if it is a carbohydrate-heavy meal. These fluctuations in blood sugar levels increase the risk of chronic diseases like diabetes as well as aggravate the condition if you already have it. This is because they increase your body’s levels of inflammation and oxidative stress.

Advertisements
studies indicate that taking cinnamon alongside a carb-heavy meal may slow down the rate at which food empties out of the stomach and helps control spikes in blood sugar levels after a meal.9 10 Other studies have suggested that cinnamon may play a role in blocking the digestive enzymes that break down carbohydrates in the small intestine, thereby lowering blood sugar levels after a meal.11 12 More extensive human trials are needed to confirm this effect, though.
Facebook
Twitter
Pinterest
WhatsApp
Previous article10 Home Remedies To Tackle Colic And Soothe Your Baby
Next article7 Health Benefits Of Lemons: Reasons To Zest Up Your Diet
CureJoy Editorial