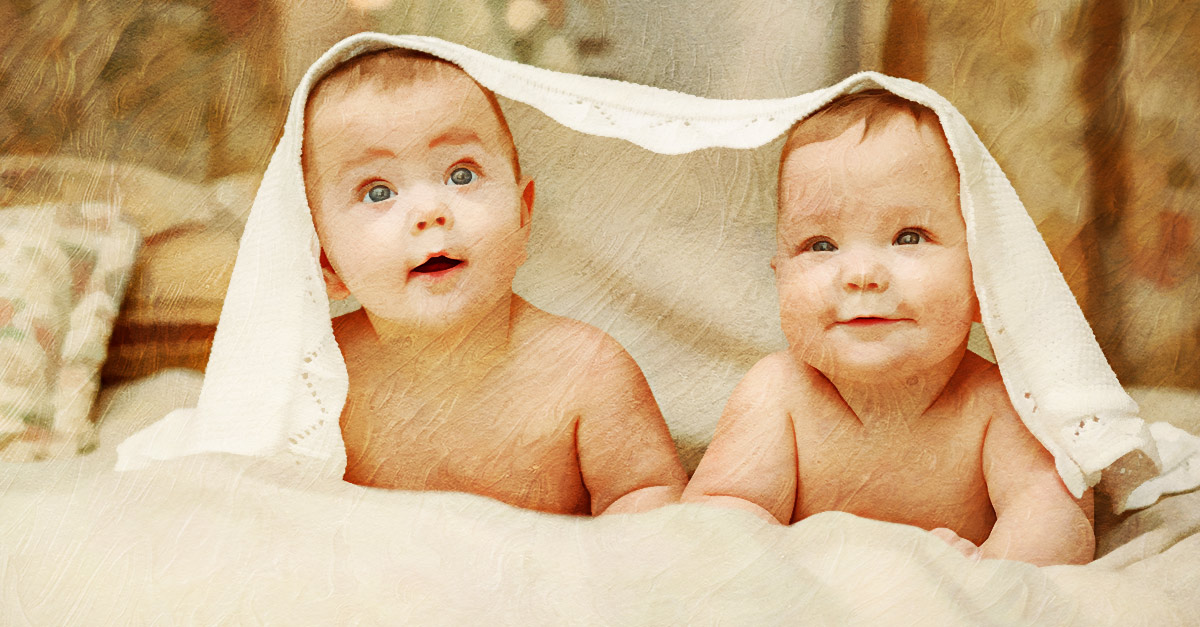 The twin birth rate in the United States has never been higher, with nearly 33.4 of every 1000 live births resulting in twins as of 2016.1 The world of twins is fascinating, so it’s understandable if you feel desperate to have twins. But can you actually increase your odds of having twins?

You can definitely control certain factors that have been seen to influence the conception of twins, but it’s impossible to guarantee that this would result in success.

While certain factors can increase your odds of conceiving fraternal twins, nothing guarantees the conception of identical twins.

Even if you do have twins, keep in mind that it’s more likely you’ll have fraternal (non-identical) twins. Identical twins occur in just 3 to 4 of every 1000 live births, quite by chance.2 Identical twins are more likely to be conceived by chance when a fertilized egg happens to divide into two. This results in two babies that look nearly alike since their genes are almost identical. Fraternal twins, on the other hand, are the result of two eggs being fertilized by two different sperm, resulting in gestation that happens simultaneously. In reality, they are not unlike two siblings who just happen to be born together.3 Here’s a look at some of the factors that may influence your chances of conceiving twins.

According to the Office on Women’s Health, the tendency to have fraternal twins may run in families.4 Dizygotic or fraternal twins are twice as likely in women whose sisters or mothers have had fraternal twins. This is due to genetic factors like hyperovulation, where, during ovulation, the woman releases more than one egg. In fact, scientists have identified variations in two genes, having which increases the chances of conceiving identical twins by 29 percent. One of these genes influences the production of follicle stimulating hormone (FSH) which contributes to ovulation and the other possibly influences the way ovaries react to FSH.5 Studies also suggest that fraternal twin pregnancies may be linked to the father’s superior semen quality.6 7

Advertisements
identical twins happen by chance, this isn’t normally linked to genetics and doesn’t usually run in families. However, as the National Institutes of Health explains, monozygotic or identical twins have been found in higher numbers in a smattering of families, indicating that there could be a genetic link as well. While the causes for identical twinning are still not clear, there is a theory that the genes involved in cell adhesion (in sticking cells together) could be at play here.8

Certain ethnic groups are more likely to have twins than others. According to the Twin Project at the University of Texas at Austin, in the United States, African Americans have the most number of twins. The birth rate of twins is nearly 37 per 1000 compared to just 32 in the average population. On the other hand, if you are Latino American/Hispanic, you are less likely to have twins. The average twin birth rate in this ethnic group is just shy of 22 per 1000.9 Another study on 76 developing countries found that Central Africa has the highest twin birth rate, with Benin topping the national average at 27.9 twins per 1000 live births.10

CDC data shows that just 2 percent of women aged under 25 have twin births, compared to 5 percent of those aged between 35 and 39 years. As you grow older but remain fertile, your odds of twin births increase even more. Which is why as many as 7 percent of all women aged 40 or more giving birth have had twins.11 This could be attributed to the increased production of follicle stimulating hormone by women aged 35 and up, resulting in multiple eggs being released during their menstrual cycle.12

If you are taller than the average American woman, you may have a better chance of having twins. A study on 129 twin moms by Gary Steinman, an obstetrician who specializes in multiple births, reveals that all the moms had an average height of 5 feet 5 inches – over an inch more than the average woman in the USA. This has been linked to a hormone called insulin-like growth factor (IGF), which is stimulated by the human growth hormone. IGF in turn increases ovulation.13 Taller individuals have a higher amount of circulating IGF.

Do note that obese mothers also tend to have a complicated pregnancy, and carrying twins may complicate matters further.

A surprising cause for twin births is maternal body mass index (BMI). As one study found, women who are obese and have a BMI of over 30 are more likely to have fraternal twins.14

Another reason being attributed to higher chances of having twins is if you have recently given up hormonal birth control methods – that is, birth control pills.15 It is suggested that as the body adjusts its hormonal levels after you get off the pill, there’s a higher chance of releasing multiple eggs during ovulation. However, more studies are needed to back this up.

It gets more interesting! According to the American Pregnancy Association, if you’ve already had many babies, you are more likely to have twins.16 The causes for this are not fully understood, though. Anecdotal evidence also suggests that having a miscarriage increases the chances of conceiving a twin. While there’s no scientific evidence to back this, it’s possible that the hormonal readjustment following the miscarriage makes the woman release more eggs during ovulation.

Another interesting find from Steinman’s study is that if you breastfed your babies from previous pregnancies, you have a higher chance of conceiving twins in later pregnancies. And the longer you exclusively breastfeed, the higher the chance of twinning.17 This again is linked to the high IGF levels in women who breastfeed.

What has made a bigger difference to overall twinning numbers is the increased use of infertility treatments like in-vitro fertilization (IVF). In fact, the Centers for Disease Control attribute two-thirds of the increase in twin birth rates in the three decades between 1980 and 2009 to use of therapies like IVF and ovulation stimulation medication.18

Please note that high doses of folic acid pre- or post-conception are potentially harmful and may result in miscarriage.

Taking high doses of folic acid supplements, both before and after conception, is believed to positively influence your chances of having twins. Now, researchers suggest multivitamins could help, too. As one study concluded, the prevalence of twin births was higher in women who took folic acid and multivitamin supplements pre- and post-conception than in those who did not.19 However, there has also been evidence that taking high doses of multivitamins and folic acid at the preconception or early stages of pregnancy might increase not just the chances of multiple births but also of miscarriages.20 In any case, high doses have several adverse effects in the long term and you should stick to the recommended 400 mcg folic acid supplementation.

Some research also suggests that dairy consumption can increase chances of a woman having twins by as much as five times. Researchers suggest this might be due to the insulin-like growth factor (IGF) present in animal milk that makes ovaries more sensitive to FSH, causing an increase in ovulation.21 Animals produce IGF in response to growth hormone injections. The IGF then gets transferred to the milk. So in countries where cattle are given growth hormone injections, rate of twinning may be higher – in fact, this is considered one of the reasons for the increase in the rate of twin births in the USA over that of the UK.22

However, you cannot guarantee having twins by binging on pineapple cores, maca root, or even the Nigerian yam. The link between yam and multiple births began to be noticed in connection with the high twinning rates among the Yoruba in Nigeria who typically have a diet rich in yams. However, no conclusive link has been established as of now. It is possible that the Yoruba women have a unique genetic makeup that makes them more likely to conceive twins.23 These are myths surrounding twin birth. Also note that no particular sexual position can increase your chances of conceiving twins.

In truth, while there are certain factors that predispose you toward conceiving twins, there’s no way to guarantee you will have twins. It’s purely up to timing and a combination of biological events, given the right setting or environment within the body. There’s no five-step magic formula encompassing all the right moves. Some things are still up to nature!