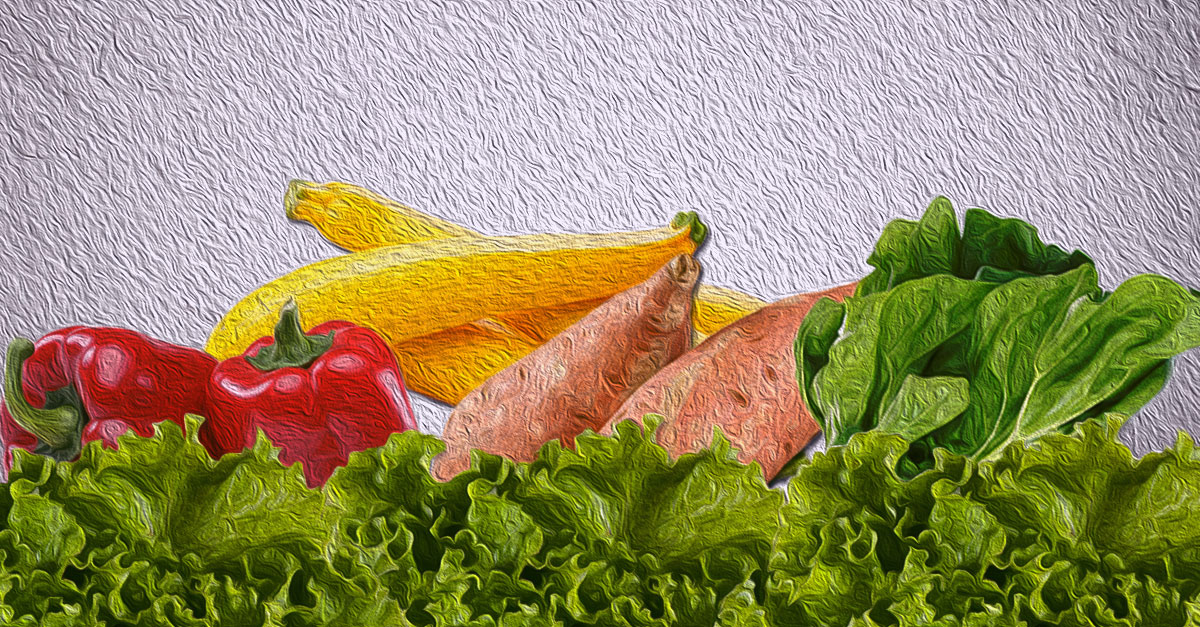 If you’re on the lookout for the best sources of beta-carotene, nature’s coded in some clues just for you! Many gorgeous orange, red, and yellow fruits and vegetables can get you the beta-carotene your body needs. Plus, there are some surprises, with a bunch of greens that could do the job just as well.

Beta-carotene is part of the group of orange, yellow, and red colored pigments known as carotenoids and is a source of vitamin A. Vitamin A is available in two forms in food – there’s preformed vitamin A, which is the kind you get from animal sources like liver, meat, fish, and dairy. And then there are provitamin A carotenoids found in plants sources, one of which is beta-carotene, which your body can convert to vitamin A.1 It has antioxidant properties and can help your body counter free radical damage. Its benefits as a supplement are under study, but research indicates that it may even help bring about apoptosis or cell death of certain tumor cells, with potential in protecting from cancer.2 Like other carotenoids, beta-carotene also has anti-inflammatory benefits for the body.3

The United States Food and Drug Administration daily values for vitamin A are pegged at 900 mcg RAE for all adults and 1300 mcg RAE for pregnant/lactating women.4 Unfortunately, there are no specifics on the recommended daily intake or allowances (RDAs) for beta-carotene, which is just one form of vitamin A. In general, keep in mind that 12 mcg of beta-carotene will give you 1 mcg of physiologically available retinol, that is, vitamin A in a form usable by the body directly.5 The list that follows lists foods that are rich in beta-carotene. You could also get retinol from animal sources and supplements or as other forms of vitamin A like alpha-carotene or beta-cryptoxanthin.

Advertisements
if there are no set limits for beta-carotene, could you have problems from having too much? Not really. Beta-carotene does not usually cause problems from excessive intake unlike preformed vitamin A (retinol) which may accumulate in the liver and prove toxic. Beta-carotene, on the other hand, is not linked to such toxicity even when consumed in large amounts (20–30 mg/day) over lengths of time.6 Of course, the best thing would be to eat everything in moderation as part of a balanced diet. So, here’s a list of vibrant sources of beta-carotene you can zero in on today! 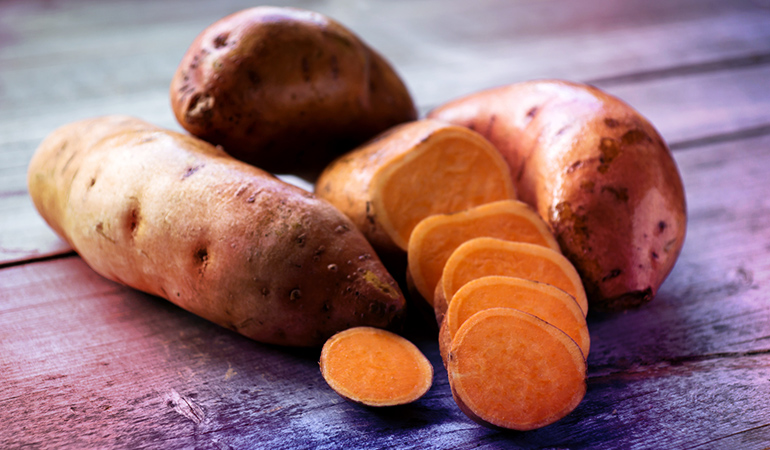 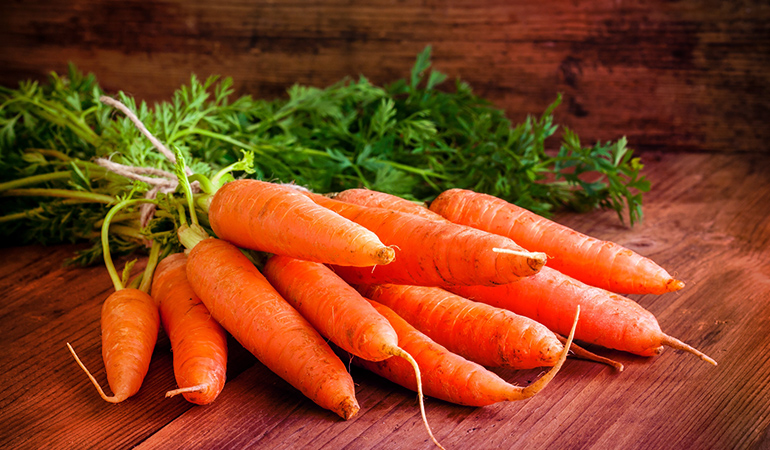 Get your crunch on with some vibrant orange carrots! Even if you have them fuss-free, plain, and raw, you’ll get 5302.5 mcg of beta-carotene per half cup.9 Make them a staple on any crudite platters you serve up and dunk them in a wholesome yogurt or hummus dip for a healthy snack. Or roast them till they start to caramelize for a lip-smacking side to your meals. Want an easier way to consume more carrots? Blitz them up into a fresh carrot juice or let them mellow in a warming stew or soup. Cooked carrots have 6499 mcg of the nutrient per half cup.10 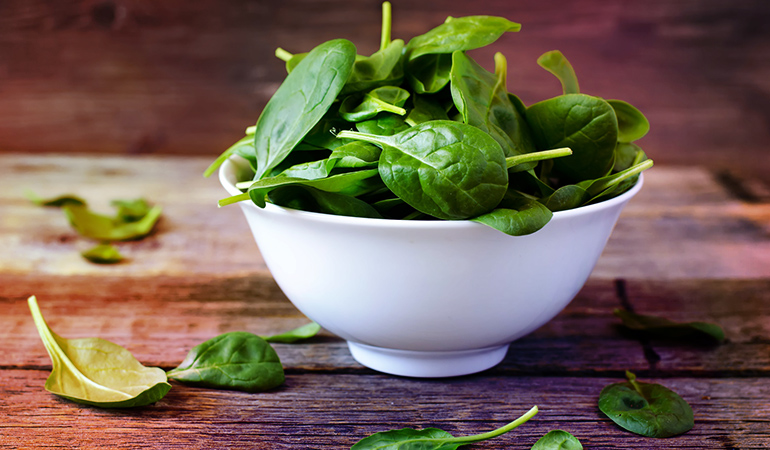 Fancy powering up with some greens? Reach for a bunch of green leafy vegetables like spinach and you’ll also have lots of beta-carotene. They are deceptive because you wouldn’t imagine how much carotenoid they pack in since the trademark red-orange hue of beta-carotene is masked by the green of the chlorophyll they contain. Half a cup of boiled spinach contains 5659 mcg of beta-carotene.11 Spinach is hard to beat in a warming soup or in a stir-fry with meat, vegetables, or beans. 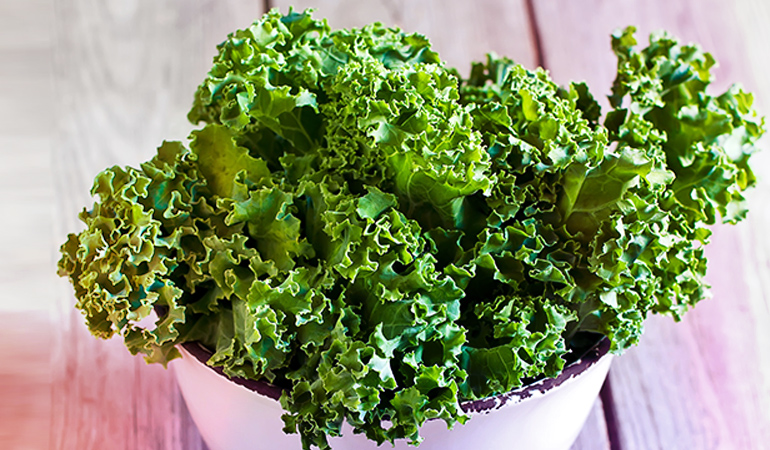 While greens like kale crisp up well in the oven for a moreish chip-like snack, you can also use the leaves in a salad if you enjoy their mild bitter bite. Half a cup of cooked kale has 5312.5 mcg.12 If you have the palate for it, green smoothies and juices are a quick way to have these greens. 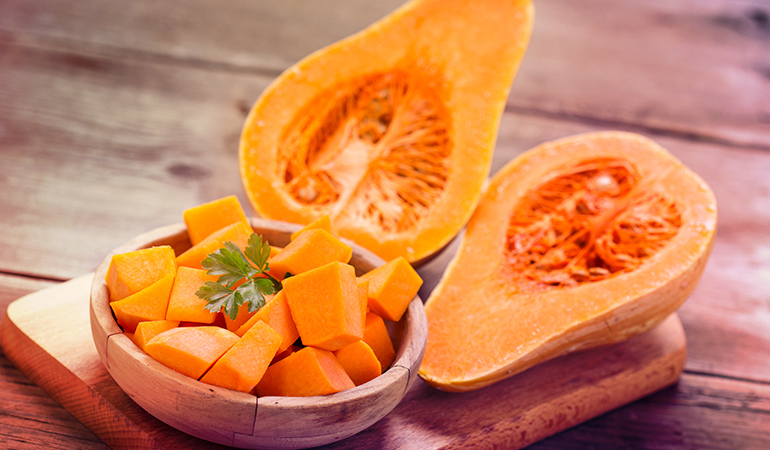 Advertisements
golden orange of a winter squash hints at the beta-carotene it contains, so if you thought it may be a good choice you wouldn’t be wrong! Half a cup of cooked butternut squash or winter squash has 4684 mcg of beta-carotene.13 Just roast some off in the oven with spices and a little oil for a simple beta-carotene boost. Or use it in a pasta or top some flatbread or focaccia with it. You could also pop it into a slow cooker with lentils for a warming meal. It even tastes delightful in a creamy risotto. 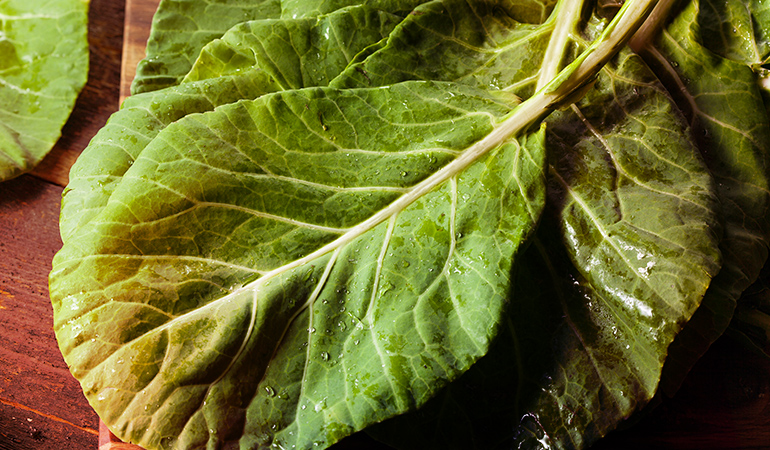 Collard greens have 4287.5 mcg of beta-carotene.14 They do well in southern style recipes involving crispy bacon bits or ham and onions and garlic. You can also use them in recipes that normally use kale. 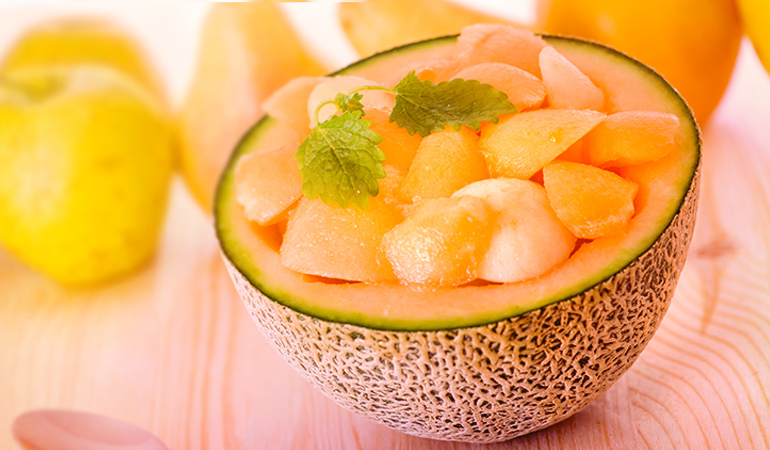 If you don’t have the patience to cook a rainbow of vegetables to get your beta-carotene, how about eating it from juicy sweet fruit? They take next to no preparation time. Simply cut yourself a wedge or scoop out some melon balls or cubes from a cantaloupe melon and you’ll have yourself a fun, minimal-effort way to get that beta-carotene. A cup of the balled melon contains 3575 mcg of beta-carotene.15

For something special that takes next to no effort, get hold of some quality prosciutto and wrap some around melon slices for an Italian style appetizer or light summertime meal. The adventurous have had success grilling it with a sprinkling of spices if that’s your thing. 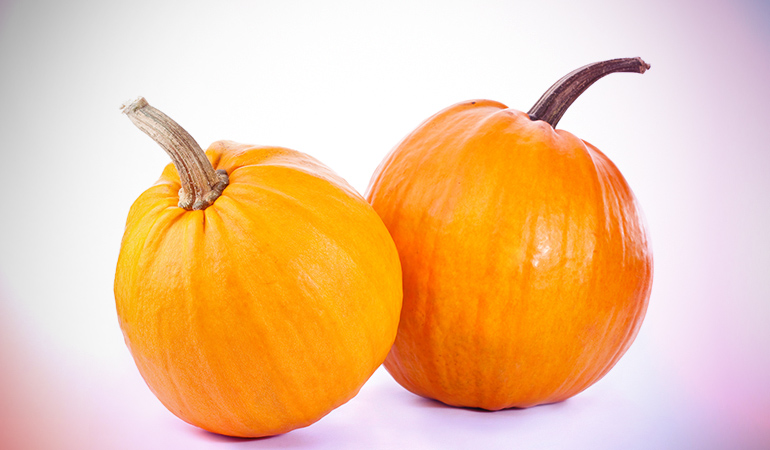 Pumpkins don’t have to simply usher in fall. They’re great on your table anytime they’re available! Make yours into a pumpkin pie that will take you back to your childhood. Or cook up a simple but satisfying thick pumpkin soup, with a swirl of cream for a little treat! Roast pumpkin works beautifully too – on its own as a side or incorporated into pasta. You can also make some great-tasting savory pancakes, sweet pumpkin waffles, or pumpkin muffins with them. And with 2567.5 mcg of beta-carotene per half cup of cooked pumpkin, you have good reason to eat them more often! 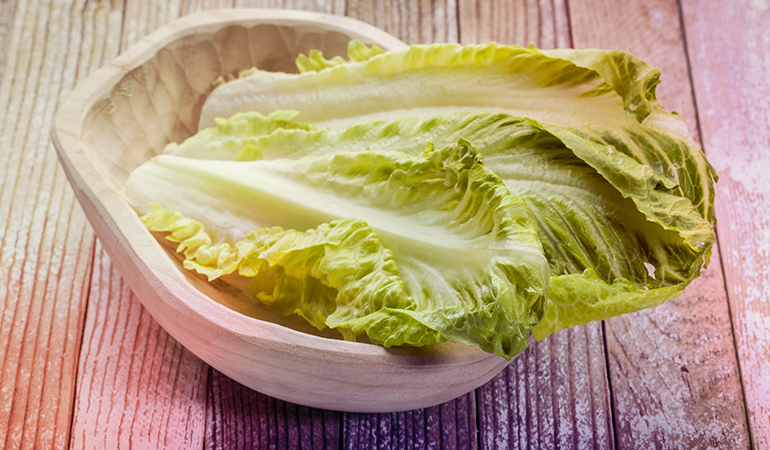 Another kind of leafy vegetable that’s a staple in most homes that eat fresh is lettuce. A cup of shredded cos or romaine lettuce goes down easily without much trouble in a salad and will get you 2456 mcg of beta-carotene.16 If you want to get experimental, try grilling off a head of lettuce, tossing in crispy garlic or even bacon if you’re feeling a little wicked. 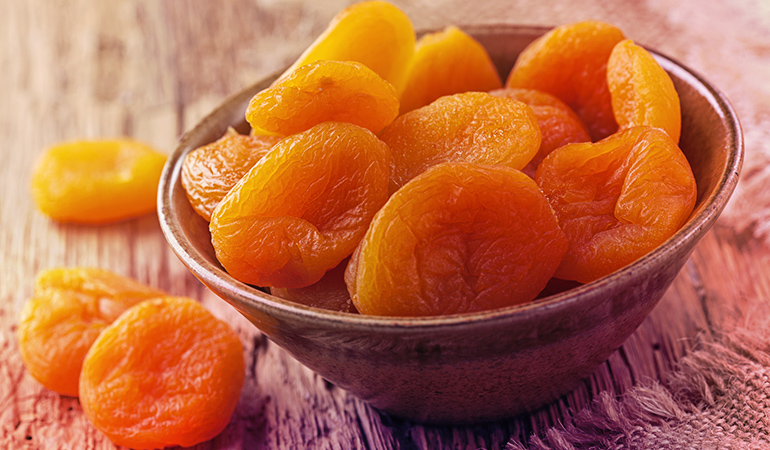 Half a cup of dried apricots contain 1406 mcg of beta-carotene so if you feel like a sweet treat between meals go ahead and nibble on some.17 Apricots go down a treat when you add them to home-baked breads, rice pudding, cakes, or even your morning bowl of muesli or porridge. They also add a lovely sweetness and chewy texture to couscous recipes, whether served warm with a tagine cooked curry or stew or cold as a salad. 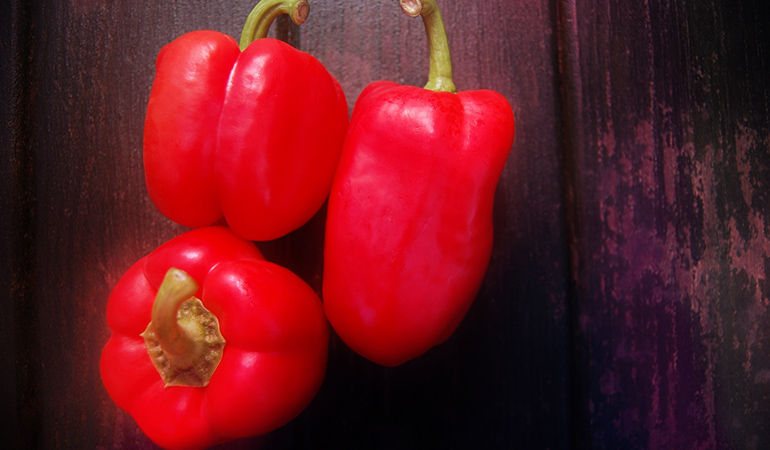 Fiery looking red peppers are actually pleasingly sweet to taste and can freshen up any meal. Half a cup contains 1210 mcg of the nutrient but you can quite easily double your intake by eating more of these delicious peppers.18 Roast these red peppers and add them to salads, salsas, or dips. Or stuff them with your choice of meaty sauces, rice, cheese, or vegetables and bake them to perfection. 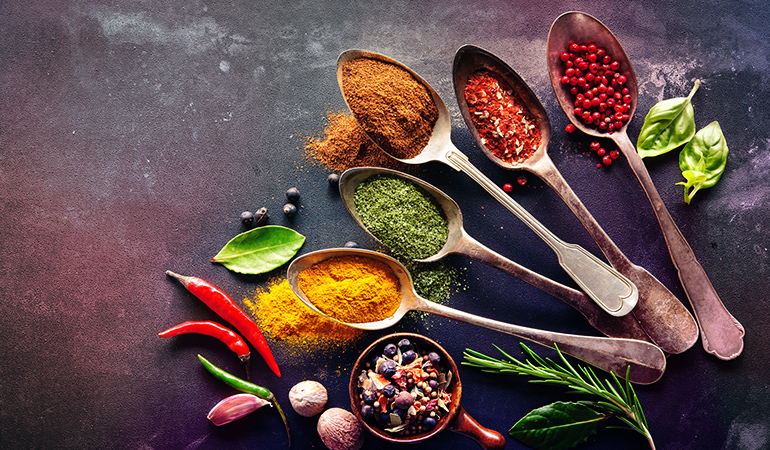 Some herbs and spices can also give you a little beta-carotene. Parsley, for instance, has 1516 mcg of beta-carotene in every half cup.19 Paprika has 602 mcg in just a little teaspoonful while chili powder has 405 mcg in that amount.2021

Beta-carotene rich foods cover a variety of produce so you’ll never be left wanting for fresh ways to consume the nutrient. So just reach for those bright orange, yellow, and red fruits and vegetables (and those greens) and get cooking!