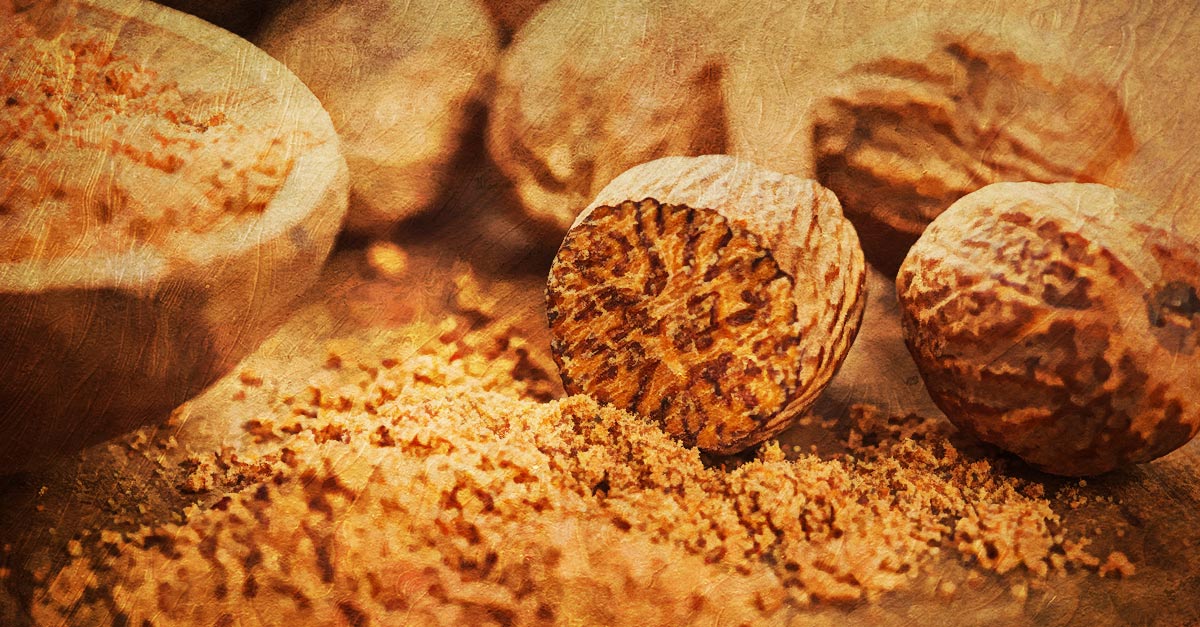 Can you imagine a rice pudding or a spiced gingerbread without a pinch of heady nutmeg? This spice has been used in both savory and sweet dishes for centuries. In fact, in the 18th century, people would carry nutmeg in pocket-sized silver graters so they could enjoy it whenever they wanted.

This seed (that’s right, it’s a seed, not a nut!) is a nutritional powerhouse and contains flavonoids, lignans, and alkyl benzene derivatives like myristicin which give it a range of medicinal benefits.23

Let’s take a look at all that this fragrant spice can do for you.

Advertisements
your HDL and LDL cholesterol level is important for keeping your heart healthy. And nutmeg might be able to do just that. One animal study found that when subjects with high cholesterol were given nutmeg, it reduced their LDL cholesterol by 76.3% and prevented triglycerides, cholesterol, and phospholipids from accumulating in the heart, liver, and arteries. But that’s not all. It was also able to combat experimentally induced atherosclerosis by reducing plaque size. Nutmeg is thought to work by hampering the absorption of cholesterol.4

Nutmeg may also be able to help you manage your blood sugar levels. In healthy people, insulin triggers the movement of glucose out of the blood into cells, where it is used to produce energy. But sometimes, you develop insulin resistance, that is, your body doesn’t respond properly to insulin and glucose builds up in your blood. And over time, this can lead to diabetes. However, research indicates that nutmeg can improve your body’s response to insulin by activating a protein regulated by insulin which transports glucose.5

studies have found that nutmeg oil has analgesic properties.13 No wonder then that herbalists and aromatherapists have long advised a warming nutmeg oil massage to relieve muscle aches and joint pain.14

Banish sleepless nights with nutmeg. This spice is known for its sedative properties. According to the ancient science of ayurveda, having 1/8 of a teaspoon of this spice in warm cow’s milk before going to bed can help you settle in for a good night’s sleep.15

Enjoy The Benefits But Use Nutmeg In Moderation

Nutmeg works particularly well with creamy and starchy foods and makes a great flavor combination with both cinnamon and oranges. You can season rice puddings, butter-rich mashed potatoes, and custards with it or use it on cakes and muffins to amp up the yum factor. Keep in mind that while whole nutmegs keep for many months, ground nutmegs deteriorate very quickly. So it’s best to freshly grate this spice on your dishes.16

While nutmeg does have a ton of benefits, it’s not advisable to consume large amounts of it. According to toxicologists, excessive amounts of this spice can be poisonous. Even as little as 2 tablespoons of this potent spice can bring on side effects that range from dizziness, nausea, and dry mouth to a slowing down of your brain and hallucinations. How much is safe for you will also depend on your individual constitution and body mass. So, while you can use it in small amounts to season food, lay off larger quantities. It’s also not recommended during pregnancy as it can induce abortions.17