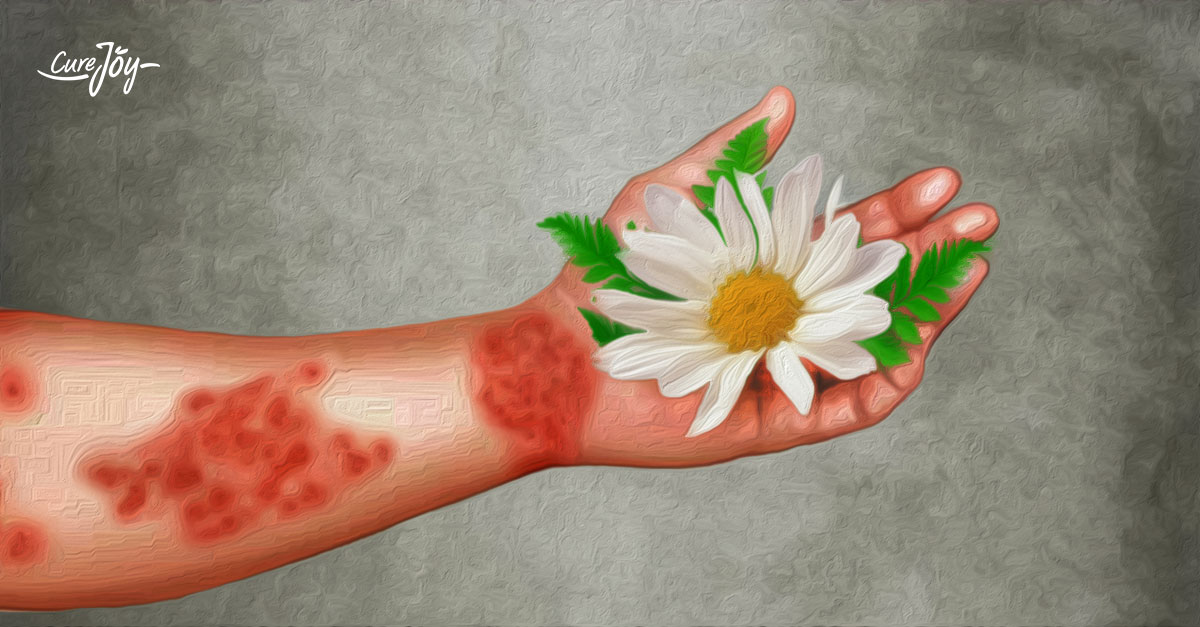 Chamomile is an alternative remedy that features in any self-help kit. And with good reason too. This herb has a long history of medicinal use, with ancient Romans, Egyptians, and Greeks all vouching for it. Part of the daisy family, chamomile comes from either the German chamomile (Matricaria recutita) or Roman chamomile (Chamaemelum nobile) plant. Although the German chamomile is more popular, with most scientific studies focussing on it, both plants have similar medicinal qualities. The yellow and white flowerhead of chamomile is used to make teas and capsules as well as the powerful blue chamomile oil. Its healing properties are attributed to the flavonoids and terpenoids found in the flowers.1 2 Let’s take a look at what this ancient medicinal herb can do for you.

Chamomile has traditionally been used for its calming and relaxing properties. Scientific research has found it to be useful for people with generalized anxiety disorder. People who suffer from this condition experience an almost constant state of anxiety even when there is little to worry about. This can make it difficult for them to concentrate, aside from causing physical symptoms like tiredness, muscle aches, headaches, and stomach pain.3 One study observed that people with generalized anxiety disorder who took German chamomile extract for 8 weeks experienced a significantly larger reduction in anxiety than the control group. Flavonoids present in chamomile – apigenin, in particular – may be responsible for its anxiety-lowering effects.4

How to use: Make a cup of chamomile tea by steeping 2 to 3 teaspoons of the herb in a cup of boiling water for about 10 to 15 minutes. This tea can be had between meals to relieve anxiety.

to use: Ointments containing chamomile extracts or chamomile constituents like bisabolol and chamazulene can be useful. You can also grind dried or fresh chamomile leaves with a little water and make a poultice. Apply this poultice for around 30 minutes to give it time to work.

Gingivitis or gum disease can cause swollen, red gums that are prone to bleeding easily. The accumulation of plaque on your teeth is known to cause gum disease. Chamomile can help you out here too. One study found that when a mouthwash made of German chamomile was used for 2 minutes, twice a day, for a period of 4 weeks, it was effective at reducing both gingival and plaque sores significantly.

Salicylic acid present in chamomile may account for its beneficial effect on plaque accumulation and gingival inflammation. Chamomile’s ability to promote wound healing can help with gum disease as well.11 A chamomile mouthwash may also be useful in other oral irritations like canker sores due to its healing and soothing properties.12

How to use: Mix 10 to 15 drops of the liquid extract of chamomile in about 100 ml of warm water and use that as a mouthwash thrice a day.

Hemorrhoids, swollen veins in and around your anus or rectum, are typically caused by extra pressure on your anus due to factors like constipation or pregnancy. Chamomile can help people with this condition. One study found that when people with acute hemorrhoid bleeding took a chamomile extract for a period of 2 months, the severity and frequency of hemorrhoid attacks was significantly lowered. The frequency of symptoms like itching and pain also lessened. Chamomile may work by inhibiting inflammation and increasing circulation in the bowel.13

Advertisements
to use: Chamomile extracts are available as capsules or you could try drinking some chamomile tea. You can also add some chamomile or diluted chamomile oil to a warm sitz bath for relief.

Chamomile tea can ease the inflammation and irritation that comes with diarrhea as well as reduce intestinal cramping.14 In one study, children with diarrhea were given a preparation of chamomile extract and apple pectin as against a placebo. The duration of diarrhea was considerably shorter in the former group and there was also significant improvement in symptoms.15

Since chamomile can relax contractions in the smooth muscles of the intestines, it is also traditionally used to treat digestive problems like gas, indigestion, colic, irritable bowel syndrome, and stomach cramps.

How to use: Have a cup of chamomile tea, in between meals, thrice a day. You can also combine it with other beneficial herbs. For instance, a combination of peppermint, iberis, and chamomile might work well for indigestion.