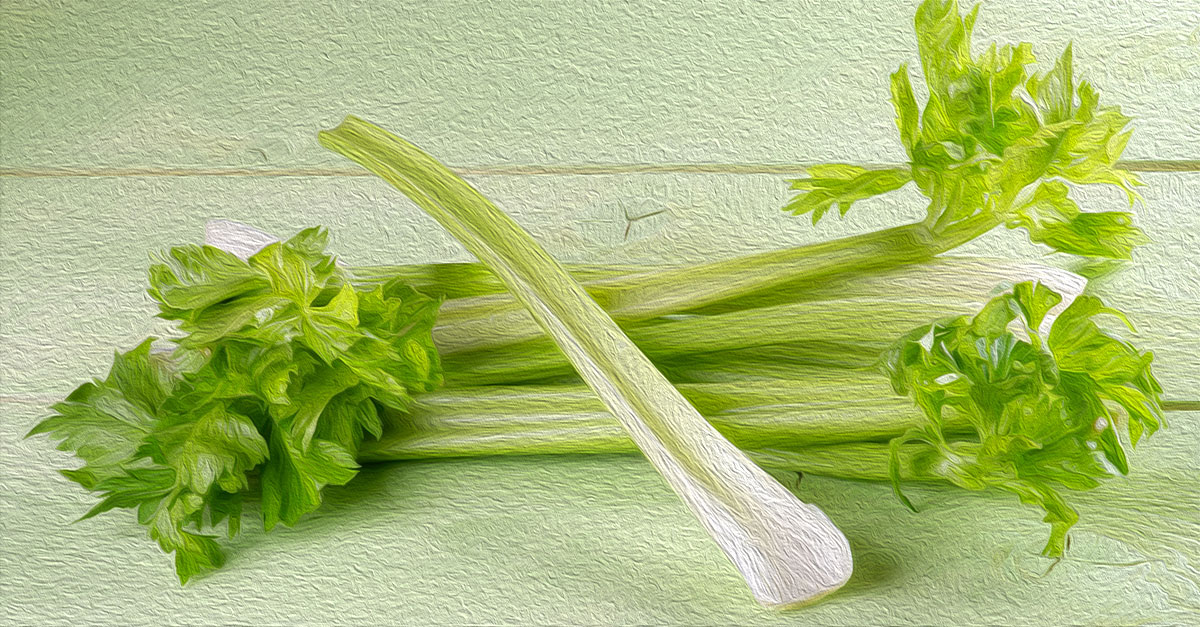 Known as much for its health benefits as its crispy texture, celery is a favorite among health buffs. And though this veggie is almost a kitchen staple today, it was originally used as a medicine rather than food. Celery or Apium graveolens has plenty to offer as an aromatic herb or vegetable, whether you use its leaves or stalks. The seeds of celery are also a flavorsome spice that features in many traditional remedies. The bioactive components in the seeds vary a bit from the rest of the plant and that brings many other benefits of their own.

Here’s what you stand to gain when you chomp down on this refreshing vegetable.

1. Is Rich In Nutrients

Did you know? The root vegetable commonly called “celery root” is not actually the root of crunchy celery. It comes from the celeriac plant, which is a member of the same family of vegetables.1

Celery is known to be a low-calorie, nutrient-dense food. One serving (110 gm) of this crunchy veggie will give you 1.8 gm of fiber. It also provides a rich mix of vitamins and minerals at just 15 kcal.

Advertisements
are some of the major nutrients present in a serving of celery and the percentage of your daily value (DV) requirement it meets:

2. Has Protective Antioxidant And Anti-Inflammatory Properties

Celery can help you fight inflammation as well as counteract the harmful effects of free radicals. These free radicals which damage your DNA and cells are produced not only when your body converts food into energy, but also when you expose it to pollution, alcohol, tobacco, refined and processed foods etc. Oxidative stress from free radicals can damage your health and lead to diseases like cancer, diabetes, heart disease, arthritis, and Alzheimer’s disease. Persistent inflammation is another fallout if your body is constantly in fight mode due to factors like a sedentary lifestyle, obesity, bad eating habits, stress, or smoking and drinking.4 5 Celery can help fight both of these – it has anti-inflammatory properties and also contains compounds like caffeic acid, apigenin, p-coumaric acid, saponin, ferulic acid, luteolin, tannin, and kaempferol with powerful antioxidant properties that counter free radicals.6 7

3. Is A Good Addition To Your Weight-Loss Regimen

Advertisements
weight loss or weight management is on your mind, it is worth incorporating celery in your diet. Its crunchy texture, high water content, and fiber fill you up easily and keep you feeling full for longer – without adding too many calories. While it is definitely low calorie, celery’s reputation as a “negative calorie food” is a bit of a myth, though – the act of chewing and gulping down celery does not really burn more calories than it provides.8

Down with a fever? Count on celery to bring down your temperature. Animal studies confirm celery’s antipyretic ability – a celery leaf extract helped significantly reduce an induced fever in the subjects. The researchers suggested that a compound known as methoxsalene present in celery could be responsible for this effect.9 Some celery soup might just be the ticket if you have been worn down by a fever.

Celery seeds have also been seen to have an antidiabetic effect, helping boost insulin secretion and glucose metabolism in the liver.16

1 out of 3 adults in the United States has high blood pressure and this condition can lead to serious complications such as kidney disease, heart failure, stroke, and heart disease.17 An animal study found that a diuretic compound present in celery called 3-n-butyl phthalide (NBP) and was able to decrease blood pressure by 12–14%. It is thought to help by relaxing the smooth muscles which line the blood vessels. If you extrapolate the result of this animal study to humans, it would mean that you need to consume around 4 stalks of celery to get a comparable dose of NBP.18

These findings are especially interesting because many traditional diets curtail the use of celery for hypertensive people because of its sodium content. So what’s the bottom line? While adding celery to your mix of 5 servings of veggies and fruits a day can help keep blood pressure levels under control according to these research findings, remember to limit your daily consumption of sodium to 2,300 mg too. For your reference, a serving (110 gm) of celery will give you 88 mg of sodium.19 20

Hyperlipidemia or high cholesterol/triglyceride levels can mean an increased risk for atherosclerosis, peripheral arterial disease, stroke, and heart attack.21 But celery can help manage your cholesterol levels too. An animal study confirmed celery’s lipid-lowering effect, with the leaf extracts significantly reducing total cholesterol, LDL, and triglyceride levels. While this effect is usually attributed to NBP in celery, the study also found that celery extracts without this component had a cholesterol-lowering effect. This suggests that other bioactive compounds might also be involved in bringing about this beneficial effect.22 23

Rheumatoid arthritis is an inflammatory and autoimmune disease that causes swelling, pain, and stiffness in the joints.25 Celery may be able to help tackle this condition thanks to its potent anti-inflammatory effect. Research also shows that celery stem contains a compound known as mannitol which has exhibited anti-inflammatory effects in animal models of arthritis. So go ahead and snack on this crunchy vegetable to fight arthritis from within.26

Animal studies show that celery leaf extract has an antispasmodic effect on the small intestine, helping it tackle diarrhea and stomach cramps.27 Celery’s fiber content can help your bowels movements and keep constipation in check. It is also considered a good remedy for heartburn.

Celery seeds are recommended in ayurveda for treating indigestion and flatulence. How do you use them? Just add 3–5 gm of the powdered seeds to a glass of buttermilk or lukewarm water and drink up.28

11. May Protect Against Parkinson’s Disease

Polyacetylenes found in celery may also have a protective effect against some cancers.29 Animal studies also show that celery seed oil may also have a chemopreventive effect, helping inhibit the formation of tumors and reduce the risk of cancer.30

Parkinson’s disease is a neurodegenerative condition characterized by the loss of nerve cells that produce the neurotransmitter dopamine. But animal studies indicate that celery can have a protective effect and fend off the condition. One study observed that celery extract, from the stem, leaves, and roots, was able to improve behavioral impairments, oxidative stress parameters, and protect dopaminergic neurons in a Parkinson’s disease model induced in mice. Beneficial compounds such as apigenin and luteolin present in celery might be responsible for this neuroprotective effect.31

Animal studies show that that celery has an antidepressant effect and improves memory. This super healthy veggie might help you tackle depression by influencing biochemical changes that impact the MAO-A neurotransmitter system which plays a role in mood disorders. Meanwhile, research also shows that a compound called luteolin which is present in celery improves spatial memory by impacting inflammation mediated by microglial cells in your brain. This kind of inflammation is associated with memory problems.32 The extract of the whole plant was used for the study.33

Celery has been used traditionally to treat sexual problems like impotency. But while its ability to tackle erectile dysfunction is not clear, animal studies do show that that celery leaf extract can increase the production of sperm and may even be beneficial for certain sperm fertility parameters.34

Treat Yourself To Celery Sticks, Juice, And More – But In Moderation!

A versatile veggie, celery works well in salads and as an appetizer. You can also use it to add a dollop of flavor to sauces, bakes, or curries. Or blitz up a delicious celery juice or soup for a shot of valuable nutrients. Research shows that compared to blanching or boiling, steaming helps celery retain more antioxidants.35 Make sure that you have celery within a few days of getting them as the nutrient content tends to wane considerably after 5–7 days.

Celery tends to be exposed to a lot of pesticides while being farmed, so do remember to wash it thoroughly before use. According to an Environmental Working Group report, you ingest as many as 67 pesticides if you eat non-organic celery! Your safest bet, therefore, is to pick up organic celery.36

While celery is definitely nutritious and good for you, remember to follow the old adage of practicing moderation in all things. Having celery daily for long periods may mess with the absorption of iodine in your body and interfere with your thyroid function. In fact, it’s always better to consume a wide variety of fruits and vegetables so that you get a good mix of nutrients and benefits from these. Some people may also have an allergic reaction to celery, so be sure to check how your body reacts to it. People who have birch-mugwort allergies may have a problem with celery too.37