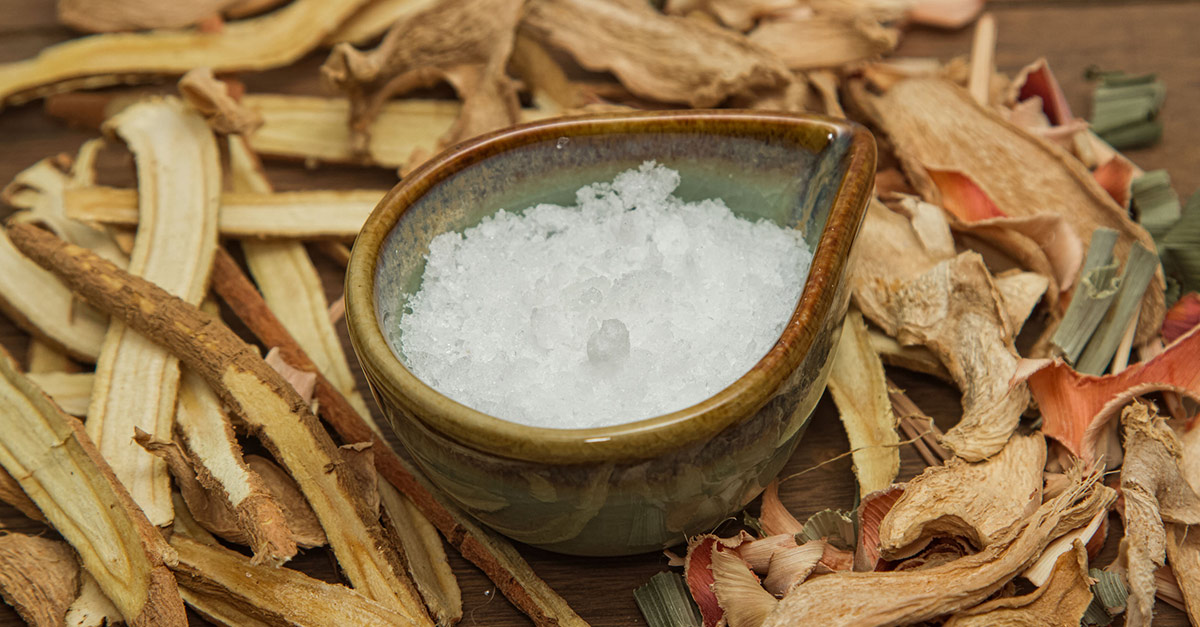 Camphor, from the tree cinnamonum camphora, has a white wax-like appearance. It is available in the form of blocks, tablets, oil, and powder. While Western medicine hasn’t yet researched the benefits of camphor significantly, Chinese and Indians have been using camphor for centuries, chiefly for religious purposes but also as a remedy to treat ailments. Even in Europe, camphor was used as a fumigant during the outbreak of plague in the 14th century.1 In ayurveda, the fumes of camphor are considered to be healing for the human mind and body – which is why several religious rituals begin with burning it. Camphor is also a common ingredient in several ayurvedic medicines and remedies, including those that treat coughs, colds, vomiting, diarrhea, eczema, gastritis, and even poor libido. There are also medicines that use camphor to treat speech problems and psychiatric conditions.2 Here are 12 benefits of camphor that make it a necessary addition to your medicine box.

you know that the Egyptians used camphor in their mummification process, owing to its antimicrobial property?11

Camphor can help heal minor burns. By stimulating the nerve endings, it produces a cooling sensation. This relieves the pain and irritation from burns or wounds. A regular application can also lighten scars.14

Several sources claim camphor can help solve hair loss, treat dandruff, and strengthen your hair. A few experts claim that massaging your scalp with a mixture of camphor and coconut oil can help stimulate healthy hair growth. While there’s evidence of traditional use of camphor for hair, we don’t yet know exactly how it works. Anecdotal evidence suggests that it can even kill lice, soothe itchy scalp, and remove dandruff.

Avoid using cooling substances like camphor on your scalp when you already have a head cold.

If you are experiencing pain around your joints and muscles, camphor might be a ready option. One study reveals that camphor oil initially produces a cooling sensation and then creates a warming sensation, resulting in desensitization of sensory nerves, which relieves pain, especially of the joints.15 16 This is why it can be considered an alternative pain relief medicine for patients of osteoarthritis. However, camphor cannot cure osteoarthritis.

Advertisements
stuffy nose? A stubborn cough? You might want to consider using camphor. One of the most popular benefits of camphor is its potential to clear a congested chest and nose. In fact, certain medicated chest and throat rubs for cough and cold also have camphor as an ingredient.18 19 This is because camphor oil has active compounds that can unclog a congested respiratory tract.

Popular anecdotal evidence reveals that people get rid of their toenail fungus just by applying a cough and cold chest rub on their toes. Why does this happen? Possibly because camphor is an active ingredient. Its antibiotic property helps destroy the fungus and lets your toe breathe freely again.21

Add a few drops of camphor essential oil in your bath water to relax and calm your nerves.

Traditionally used in aromatherapy, camphor is known for its therapeutic properties that fight anxiety and reduce stress. Lavender oil, one of the most popularly used essential oils, contains high amounts of camphor. Reports suggest that lavender oil helps reduce neurological disorders, apart from stabilizing your mood and acting as a sedative. The only time camphor should not be used in aromatherapy is during pregnancy or if you’re affected by epilepsy.22 23 24

Camphor, when applied on the skin, increases blood circulation and eliminates the risk of disorders caused by improper blood flow. A study revealed that the application of petroleum jelly, which contained up to 20% camphor, on the skin improved circulation. However, it’s important to note that camphor or camphor oil should not be directly applied to the skin.25 Mix it with coconut oil or any other carrier oil.

Ayurveda holds that edible camphor stimulates the secretion of saliva, making sure that food is effectively broken down during chewing. It also aids in peristalsis, the process by which food is pushed down along the digestive tract. The ingestion of camphor also improves the function of digestive juices, which reduce the proteins, carbs, and fat present in food into components that can be easily absorbed by the body.26

While it is unsafe to ingest camphor if you’re pregnant, its topical application can actually help you through pregnancy. Warm camphor oil can be applied on the stomach and the abdominal region to reduce the intensity of cramps.27

Camphor is inflammable; so store it in a cool, dry place away from heat or a source of fire.

Mosquitoes bugging you? Burn a camphor tablet in a corner of your room. Studies have proven camphor acts as a natural mosquito repellent.28 It has also been used traditionally to get rid of moths. Camphor crystals are popularly kept in cupboards to repel cockroaches and other tiny insects.

A Note Of Caution