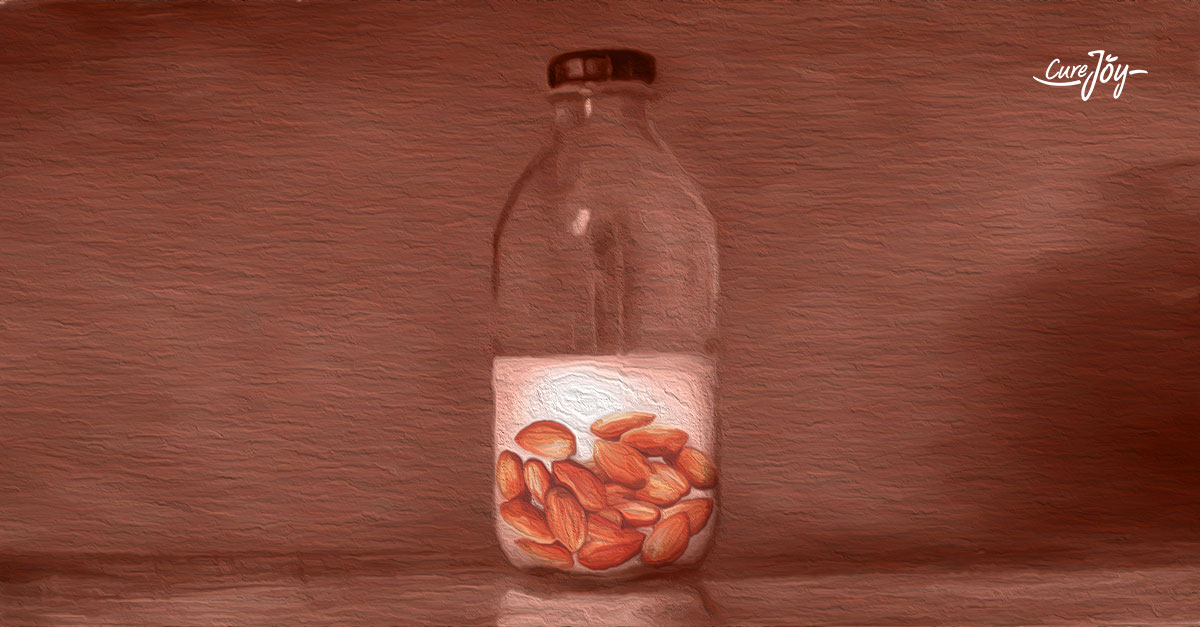 Industry-scale dairy production riddled with hormones, antibiotics, and pasteurized milk has resulted in large swathes of lactose intolerant adults. We are, however, people who cling to the old breakfast tradition of soaking our cereals in milk. Thanks to these vegan varieties like rice, soy, and almond milk, we were allowed to stick to our dietary tradition while being able to reject dairy.

Today, almond milk sales are on the rise, with numbers soaring into billions. We think it surpasses all other varieties of milk just because it’s made from almonds. After all, with all that protein, vitamins, minerals, and heart-healthy fats that make these nuts leave behind such a strong nutritional footprint, what could possibly be wrong with a bottle of store-bought almond milk? 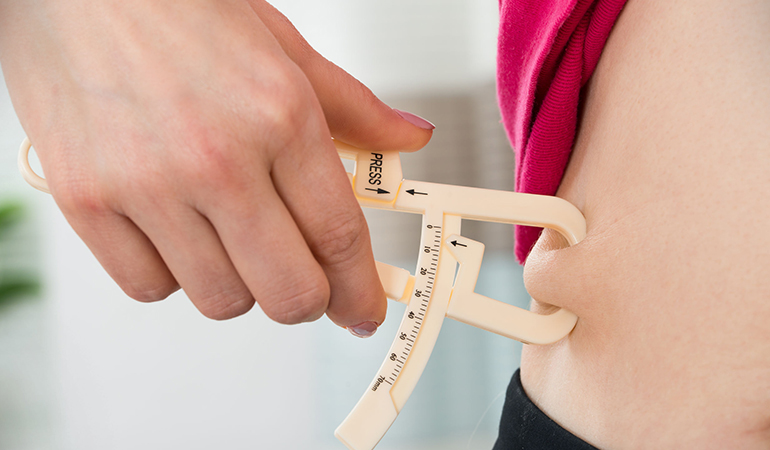 From the above numbers, it becomes clear that almond milk is godsent for those of us who are desperately trying to lose weight. One can instantly cut out about 770 calories in a week by simply substituting whole milk with unsweetened almond milk during breakfast! Even if one opts for the sweetened variety that contains about 91 calories per cup, he can still reduce his calorie intake by approximately 400 calories.3 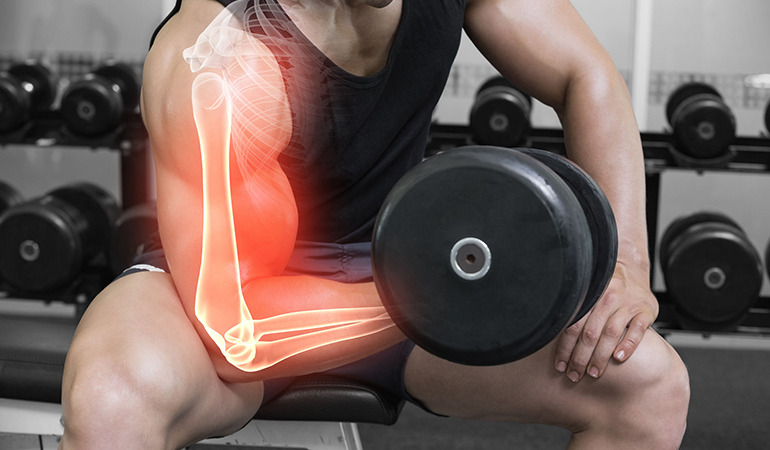 Advertisements
milk, both the unsweetened and sweetened varieties are also much higher in calcium content (451 and 516 mg respectively) as compared to 100 percent cow’s milk (which contains about 300 mg).4 5 6 Vitamin D is another important nutrient that we derive from traditional milk (100 IU per cup) and almond milk seems to be able to match that too (101 IU per cup of both unsweetened and sweetened varieties).7 8 9 Thus, it is clear that almond milk is also beneficial in maintaining good bone health.

Another plus? Almond milk, being made from almonds, is also loaded with vitamin E, a nutrient that helps prevent plaque from building up inside our arteries and helps our body manufacture healthy red blood cells.

However, Almond Milk Lacks In Protein… 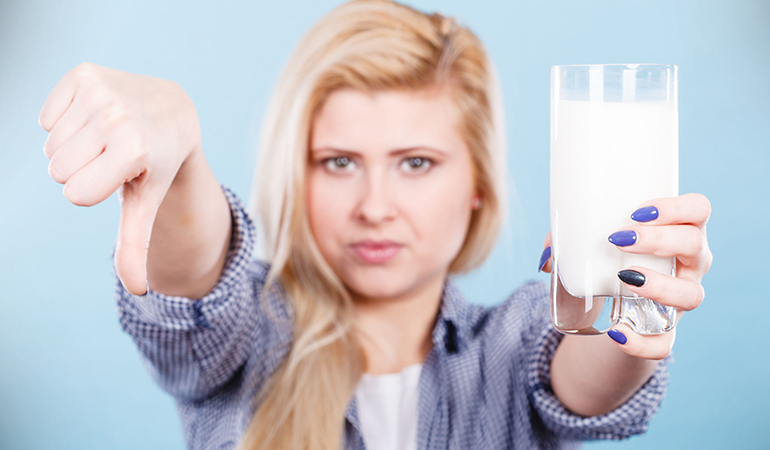 A study found that for every cup of non-cow’s milk (soy or almond milk) that children drank per day, they were 0.4 centimeters shorter than the average height for their age. Conversely, for each cup of cow’s milk they drank every day, children were 0.2 centimeters taller than average.10

Advertisements
findings of the study led researchers to believe that there is something lacking in almond milk that was hindering the children from reaching the average height, a very important indicator of overall health during childhood. Protein.

With protein being one of the important building blocks of our cells, organs, and tissues, it becomes very important for people to not just stick to their daily recommended intake, but to also make sure they’re getting their protein from healthy sources, cow’s milk being one of them.

Given the fact that almonds rank amongst the highest-protein nuts, it’s very strange that store-bought almond milk is so low in protein.

It takes a lot of almonds to produce a carton of almond milk. What you don’t know, however, is that very few almonds actually go into the making of your store-bought almond milk. A few industry insiders have recently admitted to involving less than half a handful of almonds for every half a gallon of almond milk. Of course, this may vary from one brand to another, but a recent study involving one particular brand shows that the milk contains a disappointing 2 percent almonds, which does not do justice to a product that uses the word “almond” as a selling point. 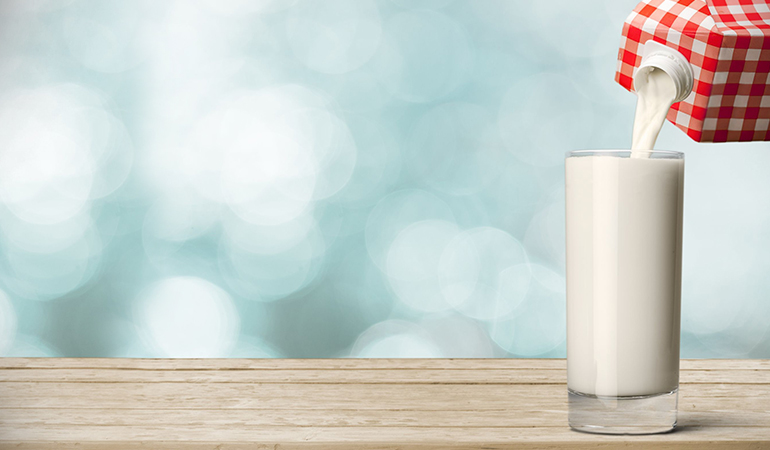 Advertisements
are expensive. So what do almond milk producers do to produce large quantities of almond milk at minimal costs, so as to meet profits? They add a whole bunch of additives that could be very harmful to your health and then try to cover it up by highlighting various certifications on the carton.

Typically, it takes just two ingredients to make almond milk – almonds and water. However, if you turn your carton over and take a look at the ingredients, you’re very likely to see mentions of sunflower lecithin, tricalcium phosphate, gellan gum, potassium citrate, vitamin A palmitate, cane sugar, and carrageenan.

Carrageenan is a beverage stabilizer and thickener, made from red algae, which can lead to severe gastrointestinal inflammation and may even contribute to cancer. So if you find out your almond milk is messing up your digestion, you know what ingredient to blame.

Vitamin A palmitate, another ingredient, is a synthetic vitamin that has been proven to accelerate cancer growth, and cause severe allergic reactions such as liver toxicity, hair loss, and eye and mouth problems. 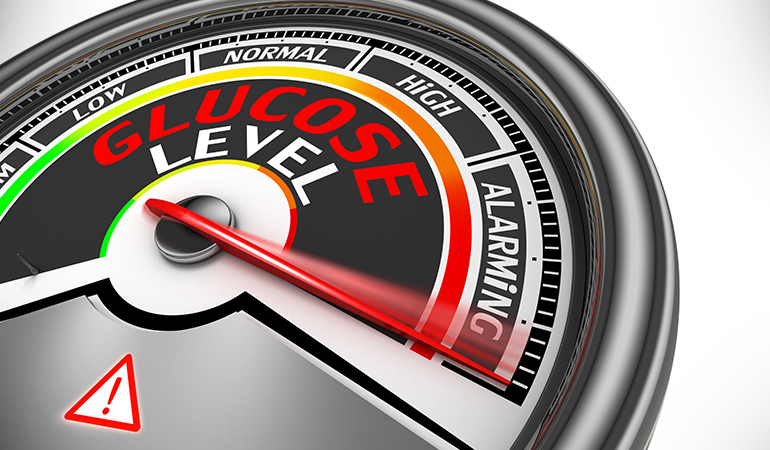 100% natural almond milk is completely free of sugar. Manufacturers, however, try to enhance the overall flavor of their almond milk by adding sugars just so that customers are tempted to stock up on their product. There’s no denying that this makes a difference in taste, but if you’re a sugar-junkie, chances are, you may face some very severe health problems in the long run.

The American Heart Association states that the daily recommended sugar intake for men is about 37.5 grams of sugar, while that for women is 25 grams.14 Store-bought sweetened almond milk has about 15 grams of sugar for every 1 cup serving.15 Therefore, if you’re a woman, this makes up about 60 percent of your daily sugar intake. If you’re very strict about your sugar intake, this shouldn’t be too much of a problem. If, however, you have the habit of indulging in sugar throughout the day, this could eventually lead to obesity, cardiac problems, and diabetes. 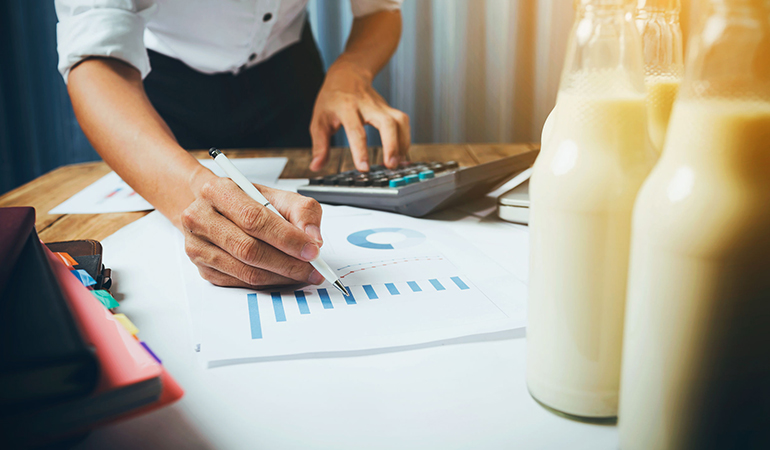 You’re Not Getting Your Money’s Worth

Given the number of almonds in your store-bought almond milk and the poor nutritional value that comes with it, you are probably far better off eating a handful of organic almonds or even by making your own almond milk at home. This way, you not only trim some dollars and cents off your grocery bill but also don’t end up getting ripped off for something that gives you less than half of the complete nutritional benefits of real, sprouted almonds. 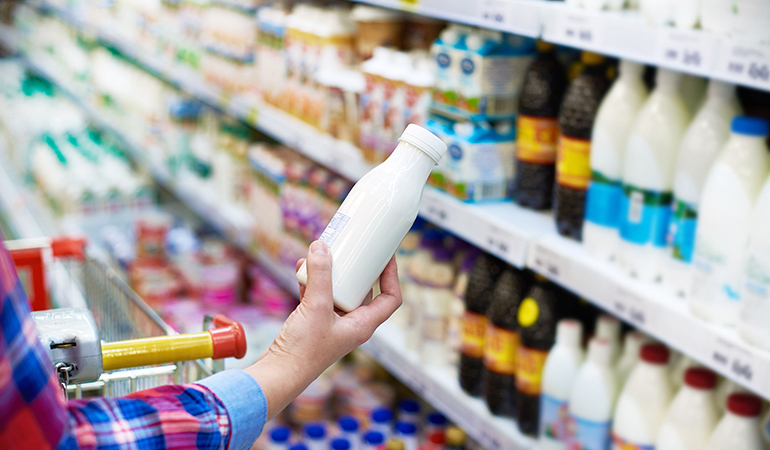 It’s important to accept the fact that unless your almond milk is home-made, it will never be as nutritious as compared to cow’s milk or an equal amount of almonds. If, however, you cannot do without buying almond milk from the store, your next best option is to be an informed buyer.

Do your homework before you pick out your cartons and learn to read the labels with extra care,  regardless of brands making grand declarations about being organic, including kosher, or being non-GMO (genetically modified).

Avoid going for brands that make a mention of carrageenan, “natural flavors”, and added sugar (this also includes cane sugar). Remember that some brands may still contain cane sugar, which still qualifies as sugar, even when they label themselves as “unsweetened”. On the other hand, some brands may contain no sugar at all but may have carrageenan. Opting for almond milk that contains neither sugar nor carrageenan, but includes artificial flavors would be a healthier option.

If possible, always try to go for the organic, unsweetened variety and if you’re unable to find this at your store, you can easily make it yourself at home!

How To Make Your Own Almond Milk At Home 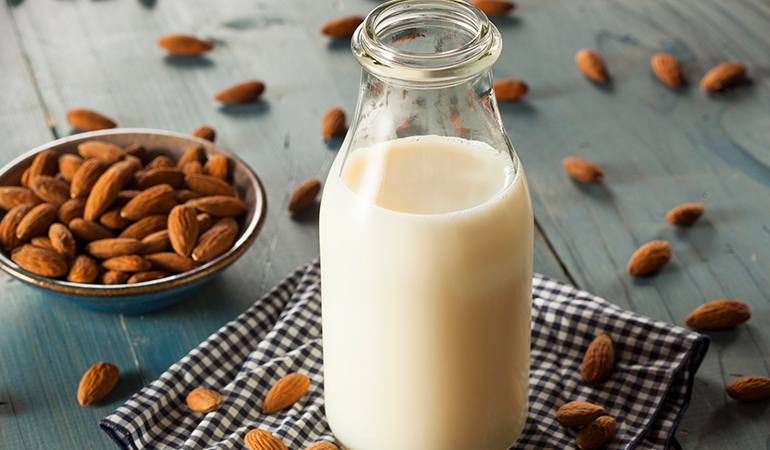 1. Soak your almonds in water for about 8 to 12 hours. You could also leave them to soak overnight.

2. Rinse your almonds and peel off the skins.

3. Tip these almonds into a blender and add about 4 cups of water. Now blitz for a few minutes until you get a smooth consistency.

4.  Stretch a muslin cloth across a trough or a bowl and pour the freshly blended almond mixture over it. Gather the corners of your cloth to form a bunch, and squeeze the milk out. You will be left with the pulp in your cloth while your bowl will be filled with a milky white liquid – which is your 100% natural almond milk.

5. Pour out the almond milk into an airtight bottle and store in the fridge; it will last for a good 3 to 4 days.

Almond milk naturally separates – and this is nothing to worry about. All you have to do is give the bottle a good shake before you start drinking, and you’re good to go!

Watch Out For Too Much Omega-3! 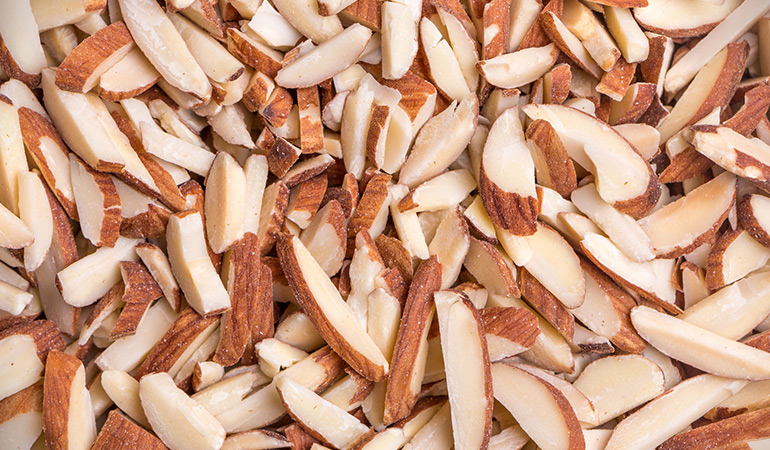 Omega-3 and omega-6 acids compete for the same enzymes that help break these acids down. This means that the amount of omega-6 in your diet directly affects the conversion of omega-3 fatty acids, a process whose end products protects us from diseases. Therefore, too much omega-6 can increase inflammation and bring down your immunity levels considerably.

People strictly following a plant-based diet are especially susceptible to the unpleasant effects of an omega-3 overdose. Therefore, be mindful of this ratio and eat a lot of fish, flaxseeds, chia seeds, and hemp seeds to help you get your fatty acids in the right balance. 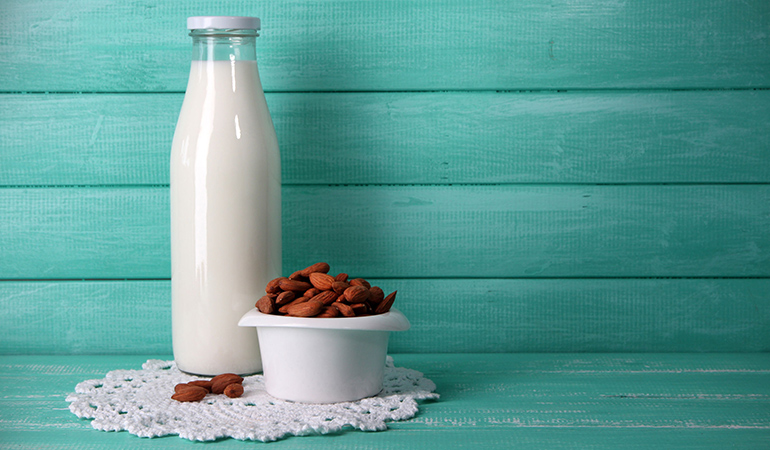 Almond milk is not really injurious to your health, but it’s not all that nutritious either unless you make it yourself at home. Store-bought almond milk may be lower in calories than cow’s milk, but it also contains far less protein as compared to a glass of cow’s milk along with several unwanted ingredients – both being very unfavorable to your health. If you go for the sweetened version, you could also be packing in a lot of unnecessary sugar – which kind of defeats the flab-fighting, healthy purpose of almond milk.

If you really can’t do without almond milk, you can really just make it at home. Like we said earlier, all it takes is two ingredients – almonds and water! The standard ratio for most almond milk recipes available online is one cup of almonds per half a gallon. Doesn’t that sound much better than that measly 2 percent?